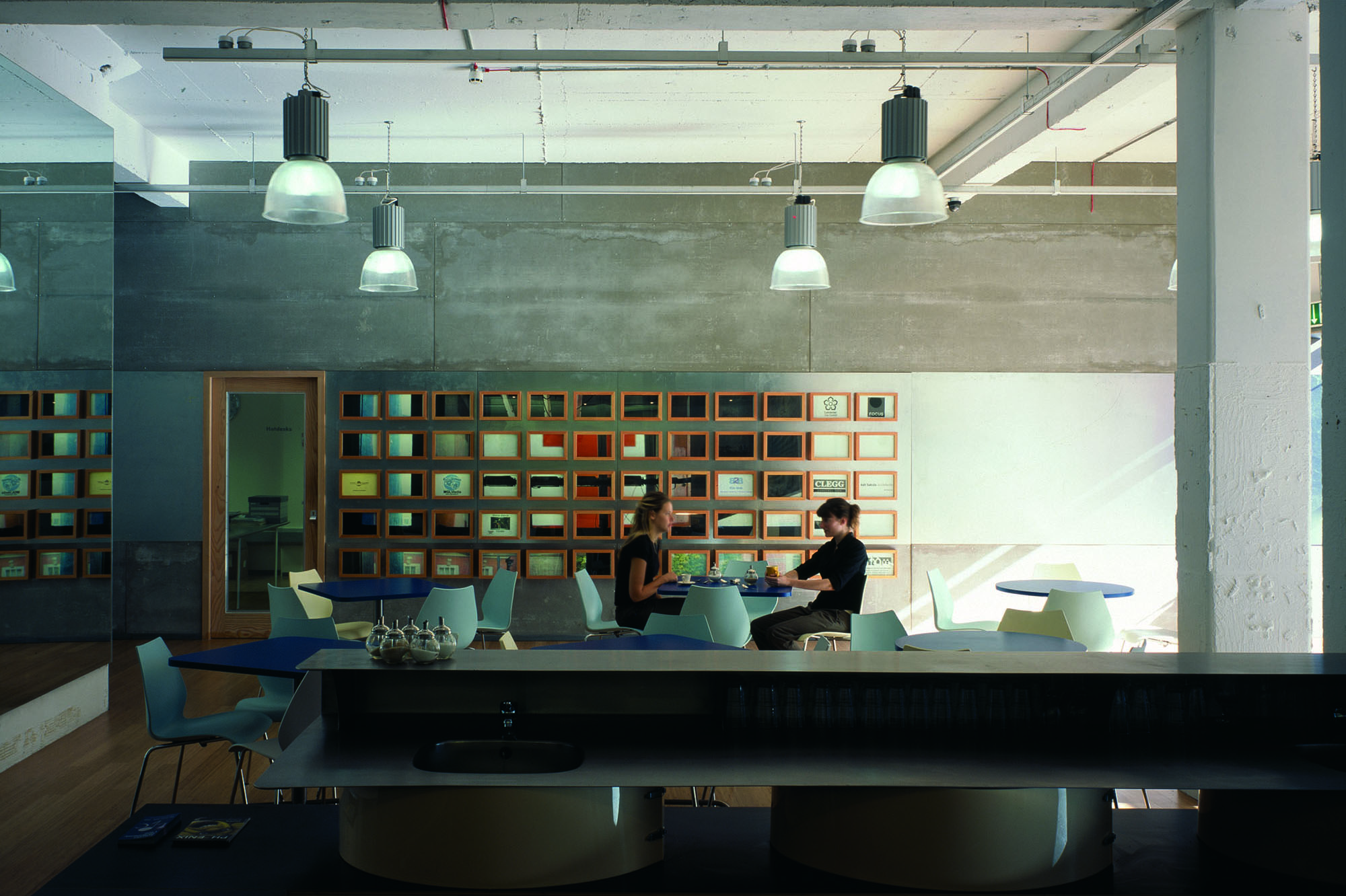 Once Leicester’s central bus depot, this site was transformed into a thriving studio and workspace hub. The letters LCB - once short for Leicester City Buses - came to stand for Leicester Creative Business.

A converted building and a new building sit either side of a central courtyard, together accommodating more than fifty studios and workspaces, as well as meeting rooms, galleries and a lively café.

Demand for space was such that this development became a model for a similar scheme in the city. 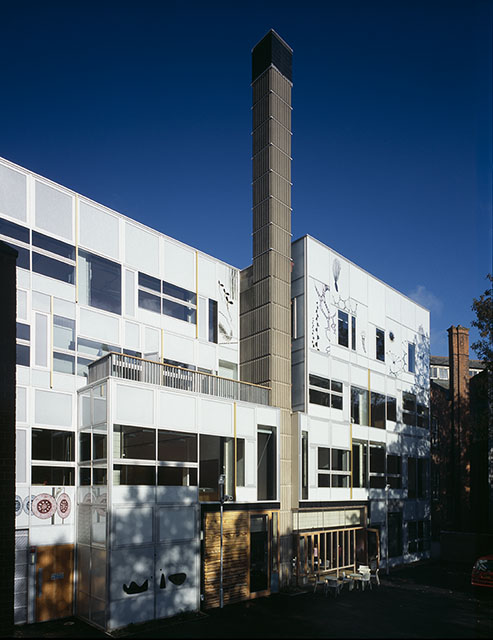 Previously an old bus depot where transport staff could take hot meals and breaks, the client described it as looking “like a huge public lavatory”.  An early budget cut prompted the uptake of Ash Sakula’s proposal to renovate the existing building rather than demolish and build again.

The folded street-facing elevation was re-faced with a wrapper of brick that kicks out at each end. Recalling the industrial use of white-glazed tiles to the backs of buildings, the off-street elevation was treated with white and clear glass, incorporating two commissioned artworks.

A main architectural move of the renovation element was to carve a void, a new lightwell, down through the building, glazed with timber-framed panes, around which the building’s circulation was organised, avoiding dark unnecessary corridors. 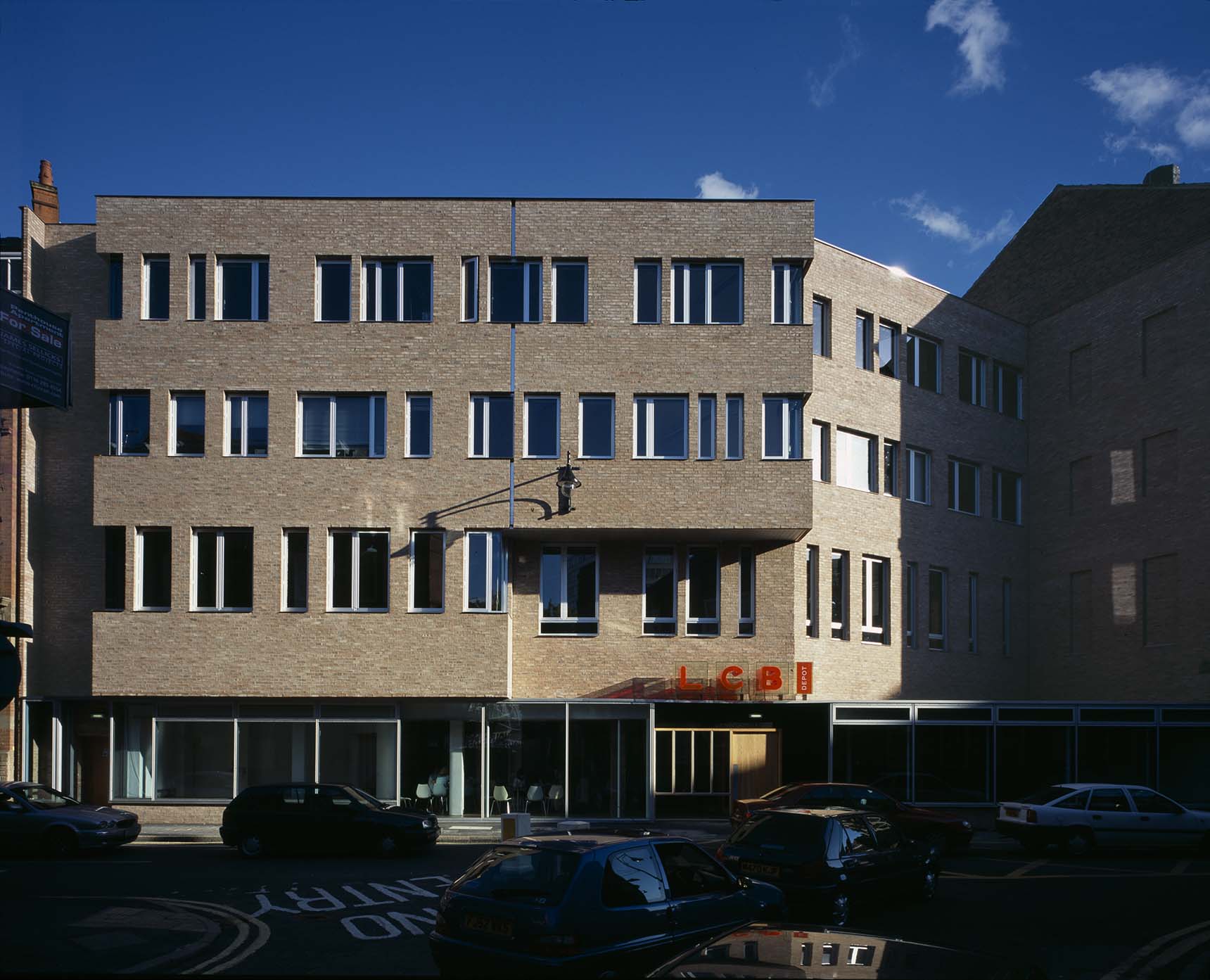 The Depot has played a key part in a successful strategy to regenerate a city centre once blighted and broken by industrial decline, and it kickstarted the regeneration of the city's St George's Cultural Quarter.

It is a building which hums with activity having achieved full occupation more quickly than expected. The client has added a second building of incubator space nearby to meet demand. 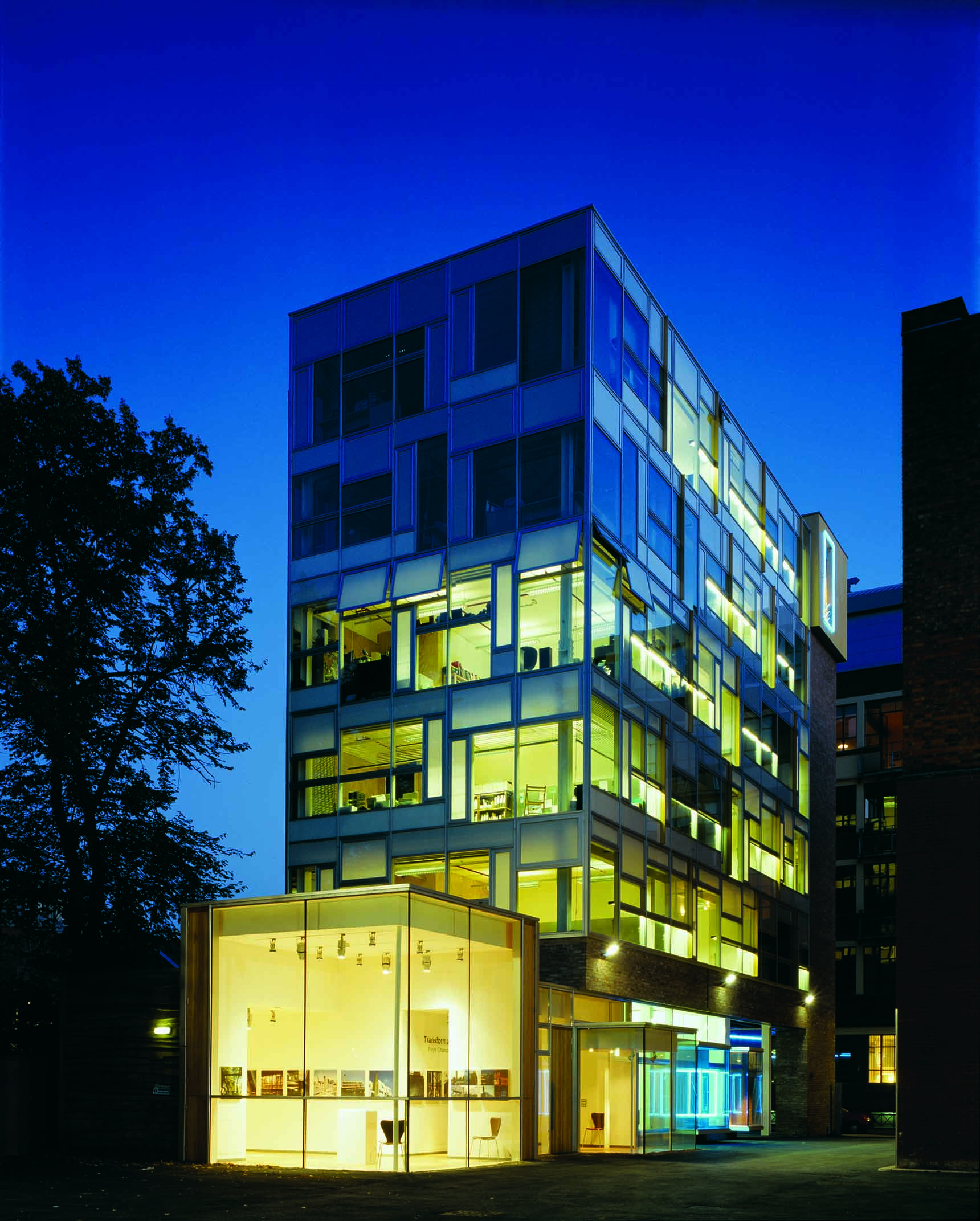 The existing bus depot did not have enough space to meet the needs of the brief. We proposed a new building to be constructed in the courtyard behind, once the bus parking area, with a frontage onto an adjoining street. 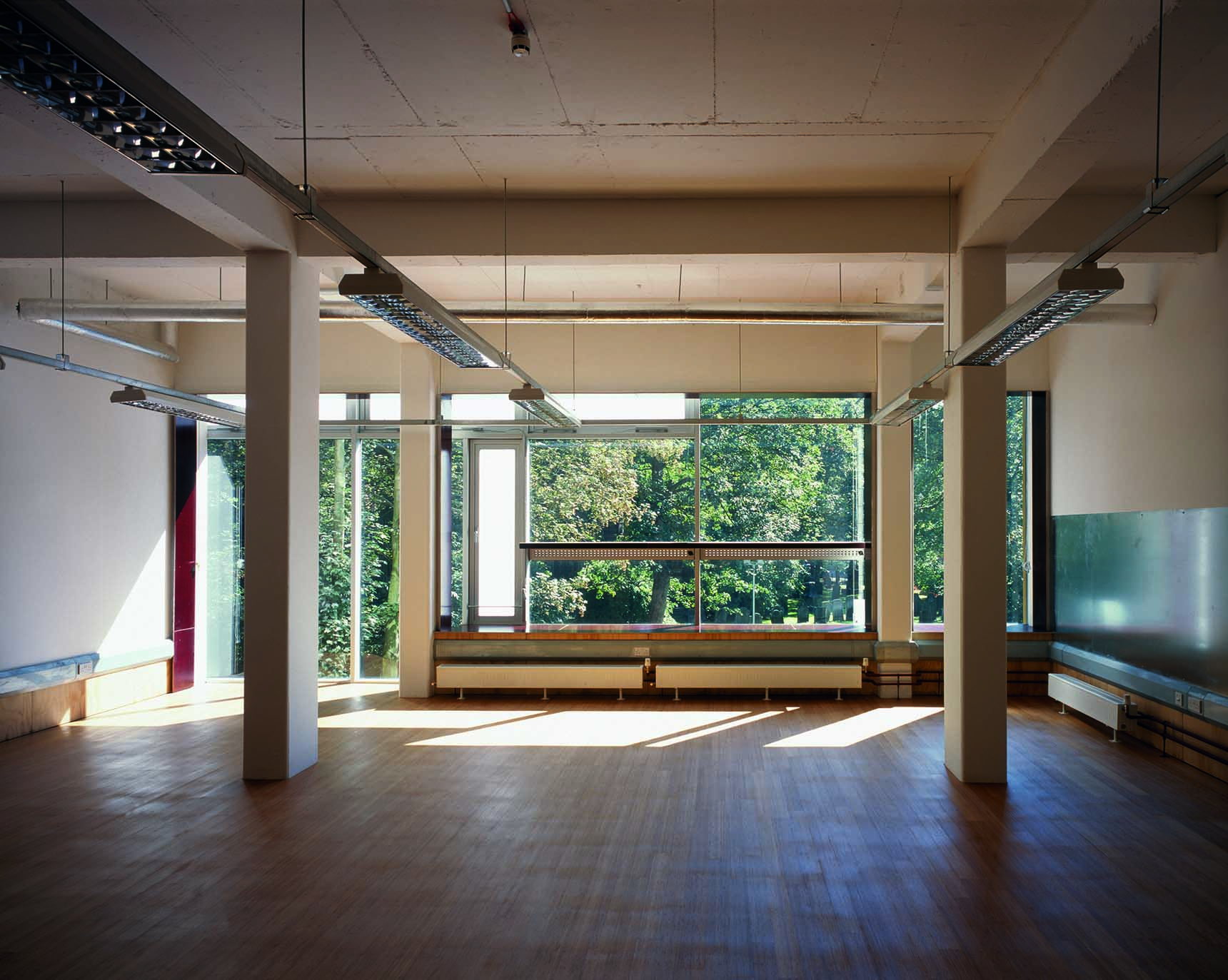 Studios are simply fitted out with bamboo strip flooring, opening windows for natural ventilation, plentiful power and data points and magnetic pinboards. In place of suspended ceilings there are painted concrete soffits and suspended lighting.

Ash Sakula’s renovation emphasized communality and conviviality: the tea-making points in the new building are plywood-faced, like tea chests, with lowered ceilings and a window seat lending them a cosy intimacy.

A playful materiality finds expression in the black astroturf and waney-edge timber panelling that are used at entrances. Attuned to the artistic sensibility of creative people who like to do things their own way, we built in opportunities for self-expression.

Postboxes in the entrance space form a colourful wall of drawers with customisable fronts. Studio doors are coated in blackboard paint so that users can draw on them. Clear perspex cubes, mounted next to each front door like a mezuzah, can be opened and filled with artefacts. The toilets are also signed with cubes which hold rolls of pink and blue toilet paper.

The two buildings of LCB Depot, the new building left, and the converted bus depot, right, sit within a conservation area with listed buildings all around.

The existing building has a frontage on busy Rutland Street in the heart of Leicester's cultural quarter, while the courtyard behind backs onto a quiet churchyard. 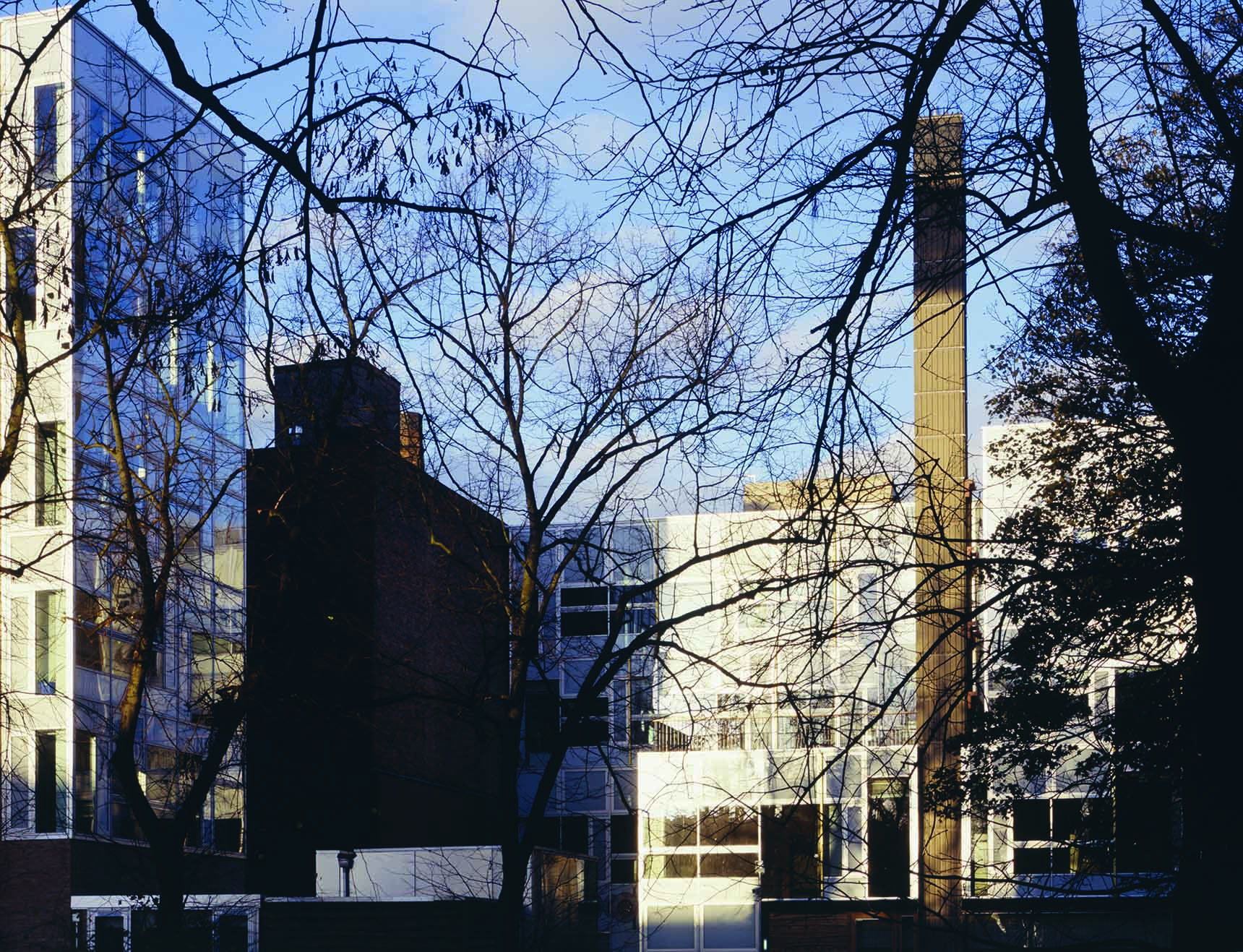 View from the churchyard. 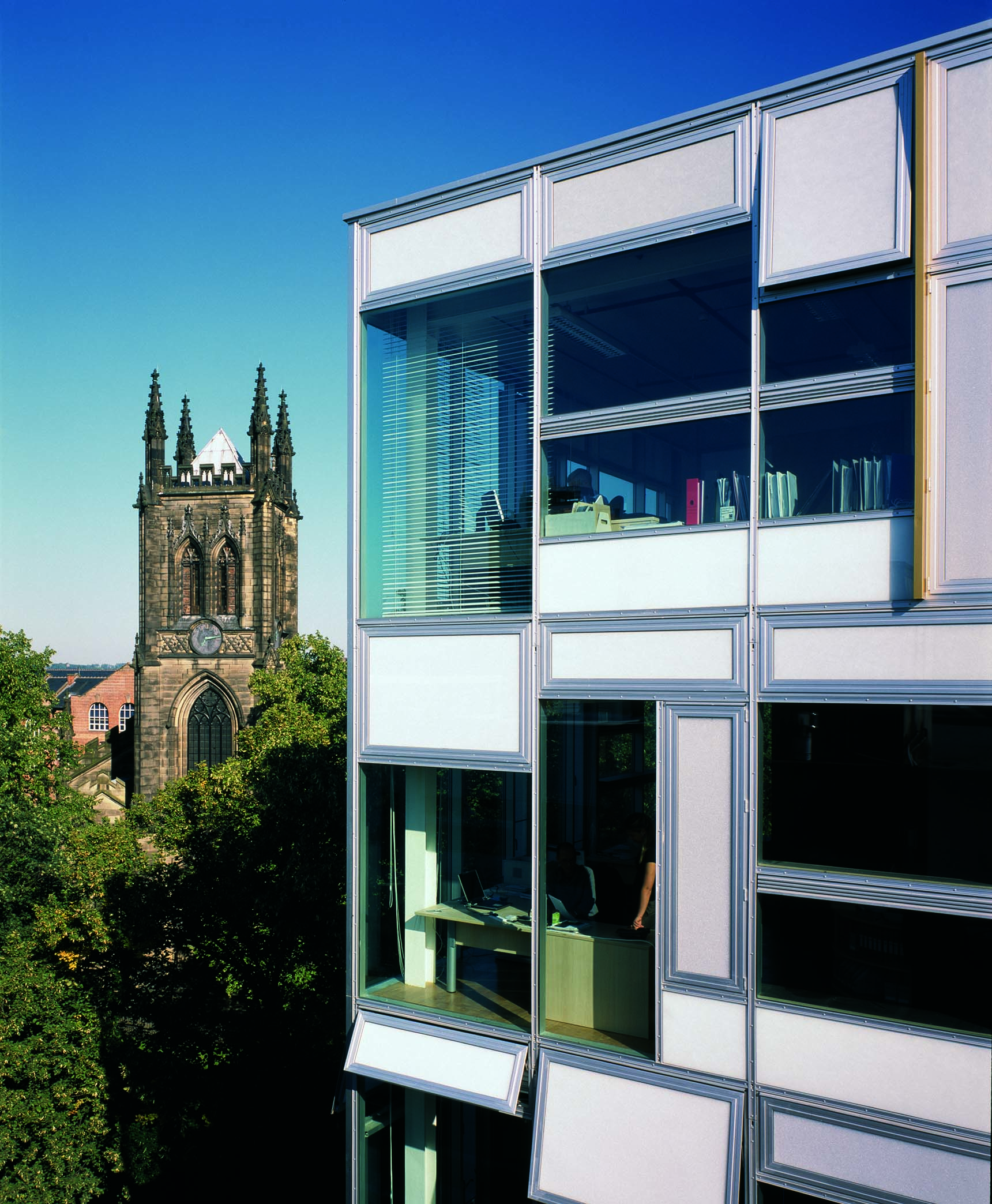 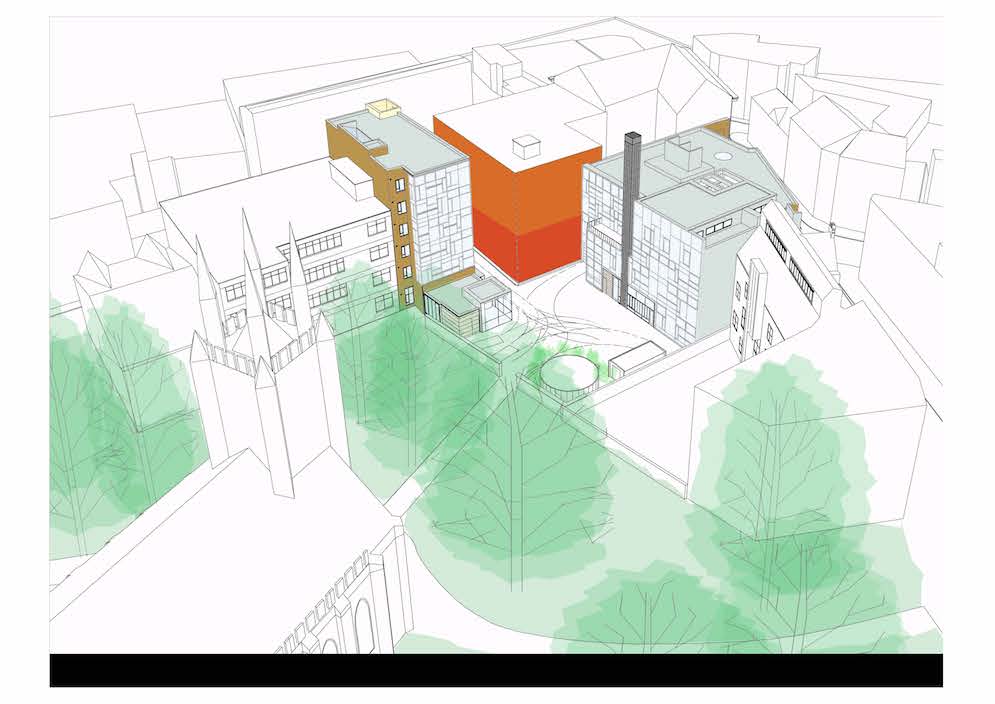 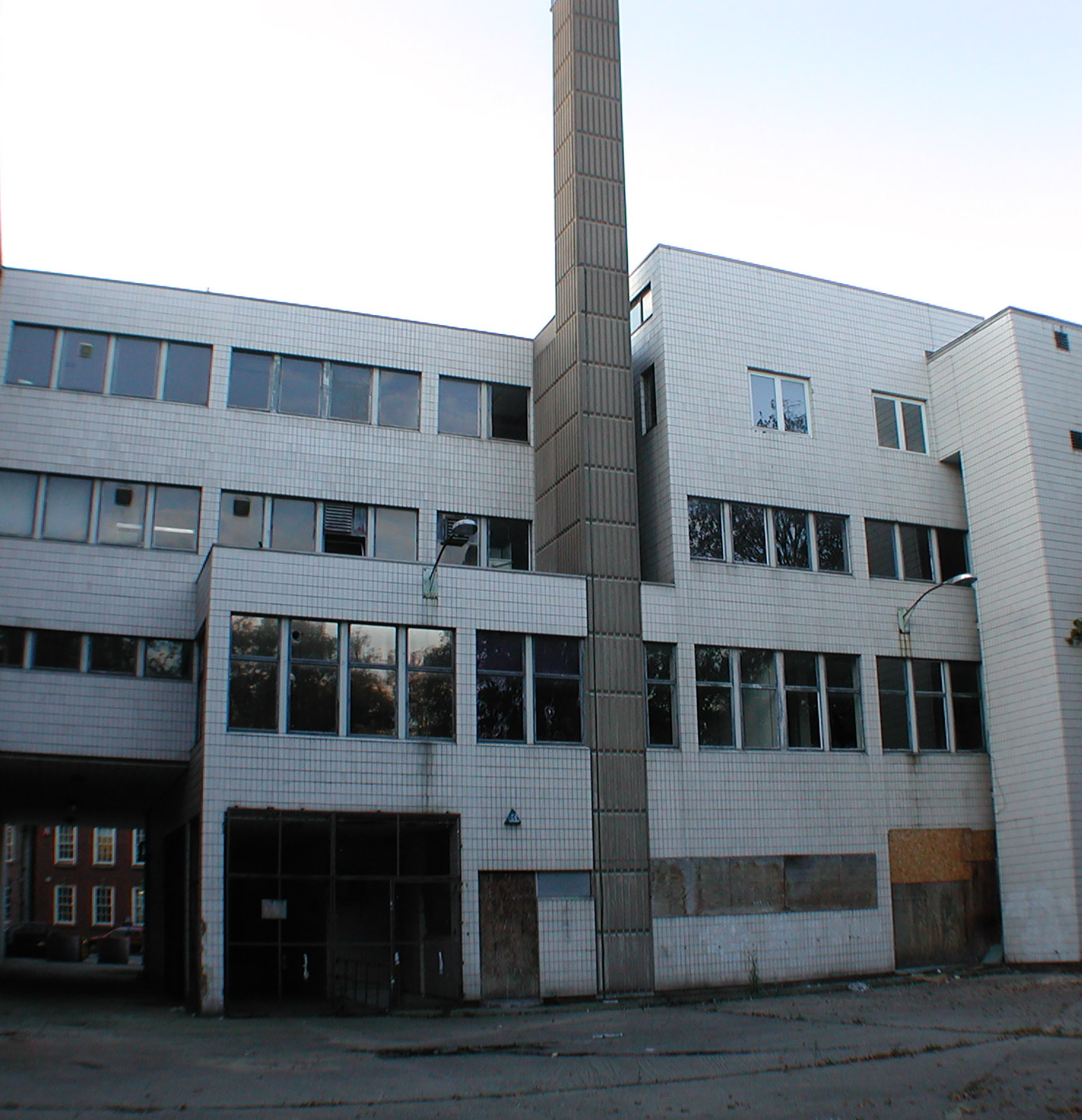 Leicester City Buses Depot: the rear facade of the existing building before conversion. Our client said it looked like a public lavatory. 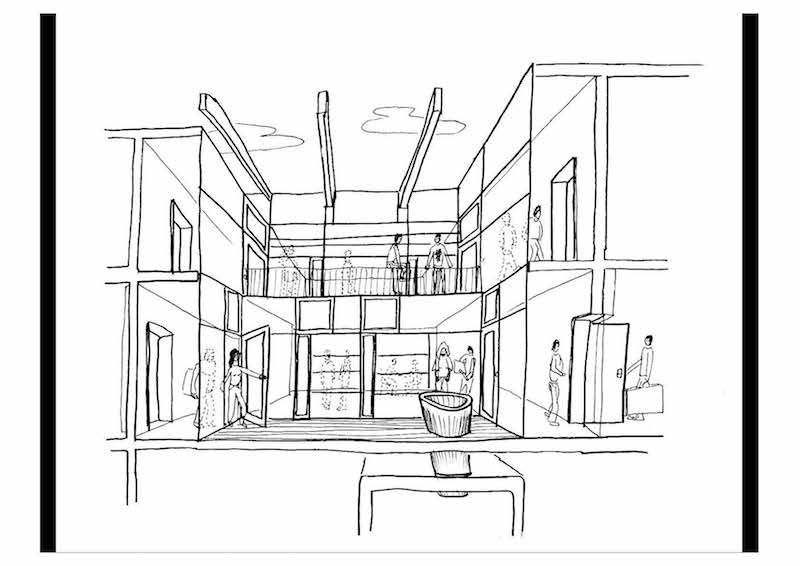 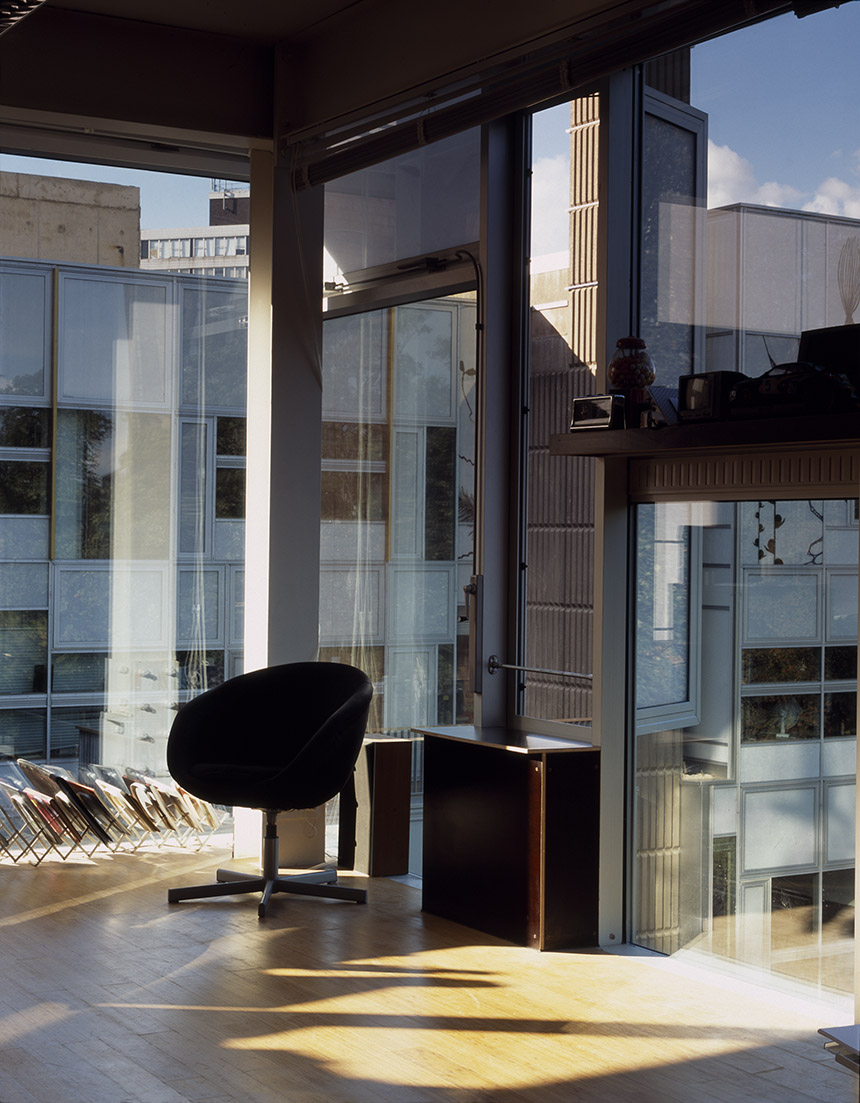 Corner studio in the new building, looking towards the original bus depot building. 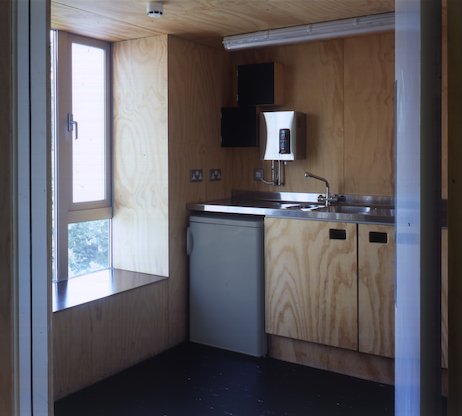 Tea points were imagined as old tea chests, with ply walls and ceilings, simple fittings and a window seat. 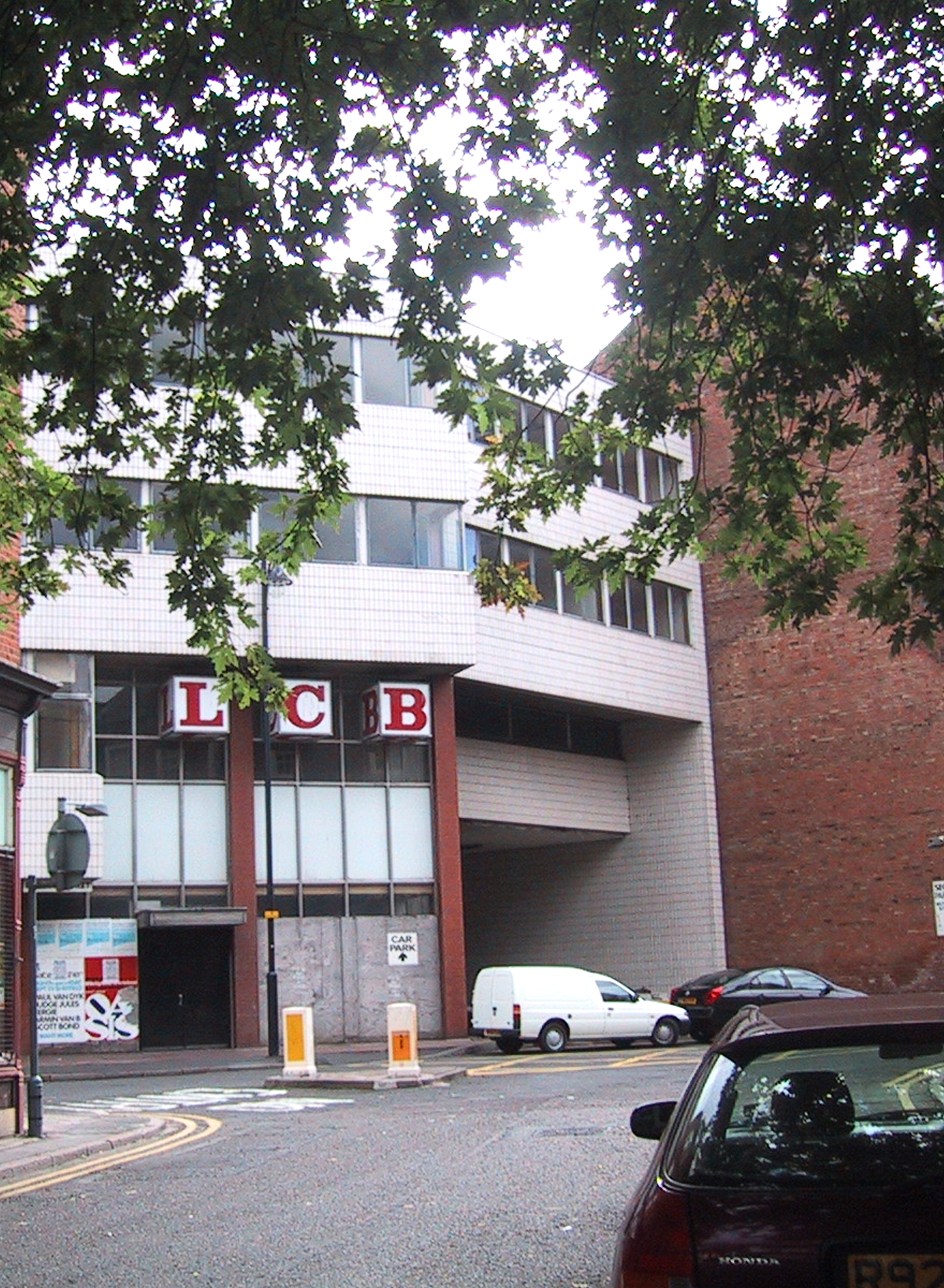 Leicester City buses prior to refurbishment.