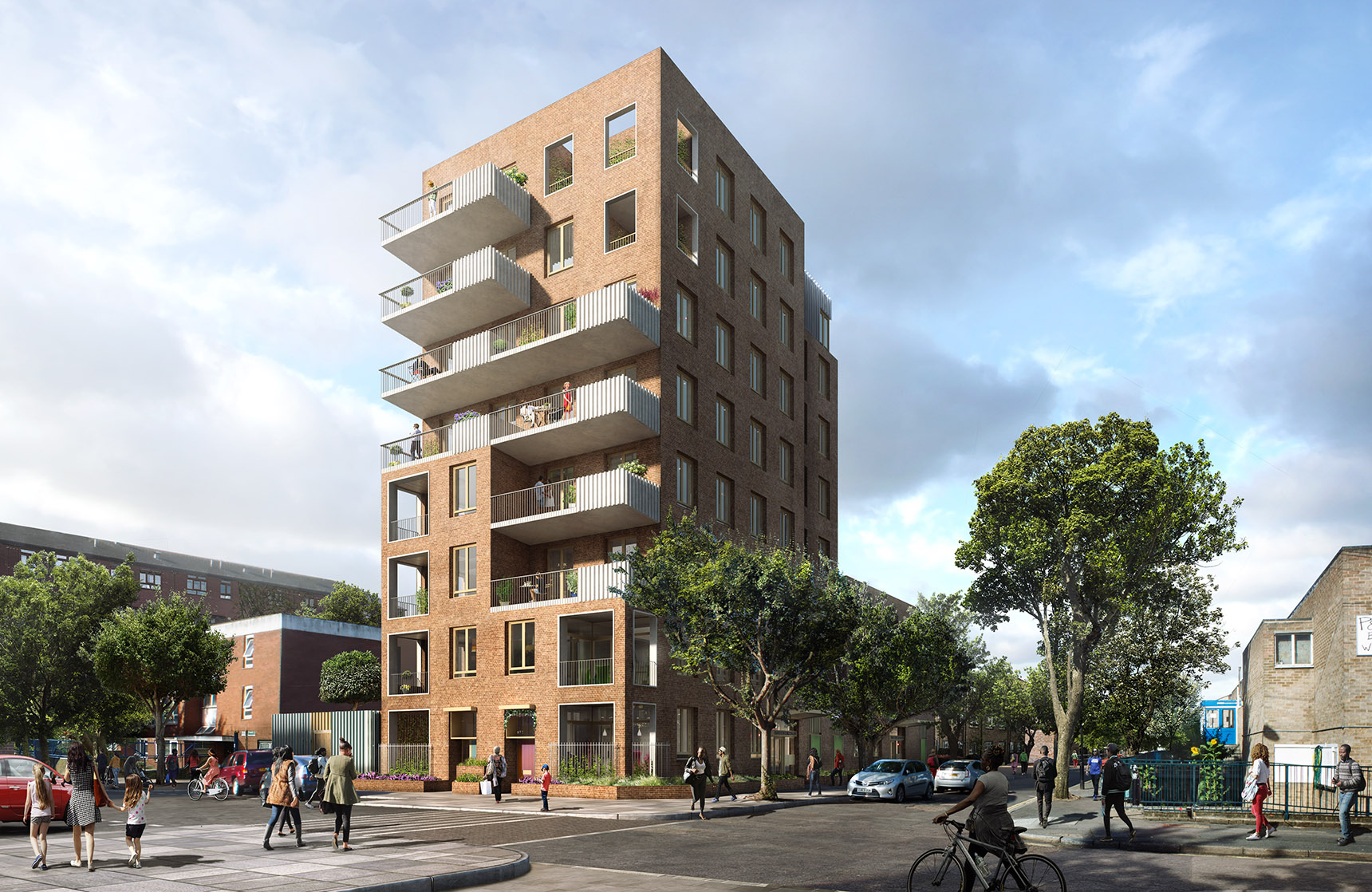 This block of 26 affordable apartments on the Clapton Park Estate, designed for the London Borough of Hackney, received planning permission in February 2018.

Ash Sakula won the project in an open design competition exceeding the requirements of a brief that originally asked for a smaller building of 16 apartments.

A combination of social rent and shared-ownership, the building replaces a redundant boiler house. It was developed in close consultation with neighbours, local residents and the general public.

As the building is to form the head of a small public square, we composed a carefully nuanced elevation that will lend a much-needed civic presence to this busy street corner.

Facing the square, the building rises to eight storeys, close to the height of the existing building on the other side of the square, while the lower part drops to three storeys to align with a neighbouring block. 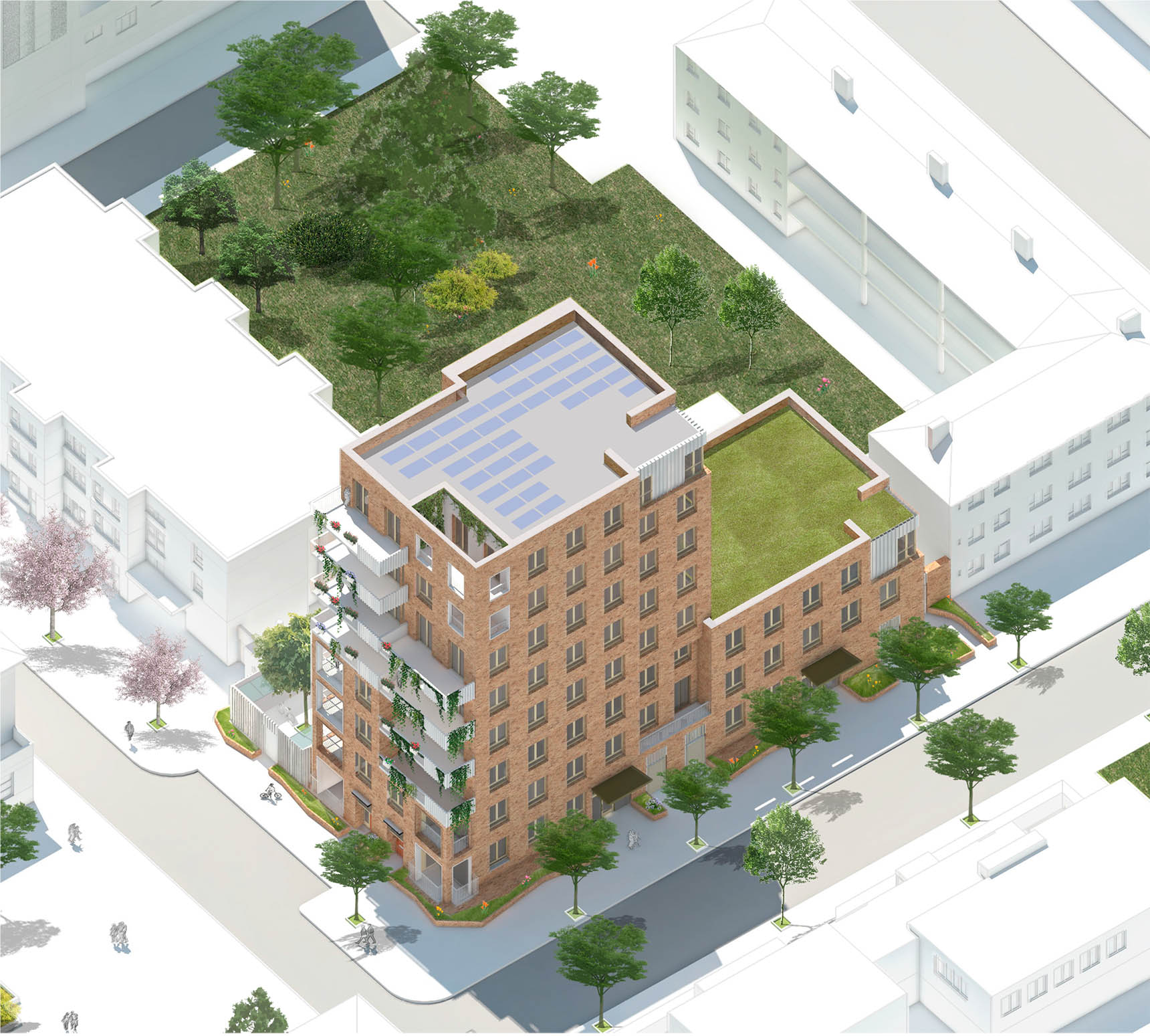 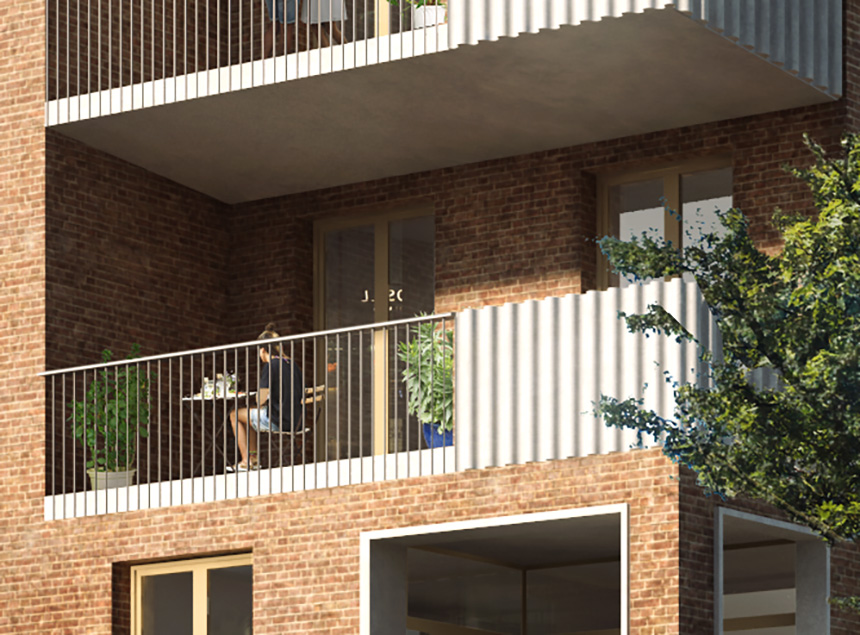 We designed the building to make a dignified addition to the local townscape by drawing on a palette of simple materials that includes brick, large aluminium-faced timber windows and balconies with corrugated concrete surfaces and canted railings that reference the mid-century designs of adjoining buildings. 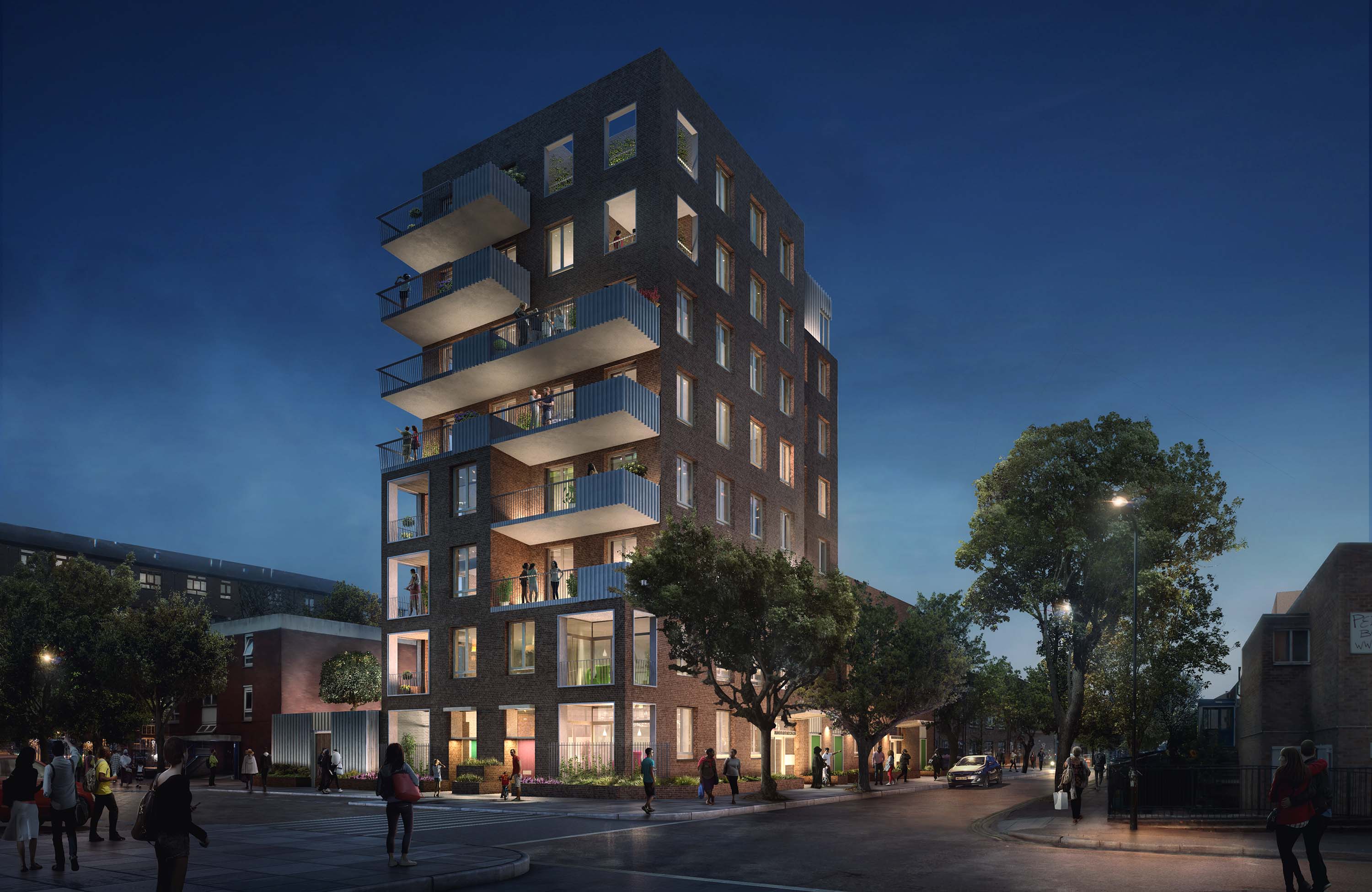 A lively street corner in place of the former gloomy disused boiler house on the site. 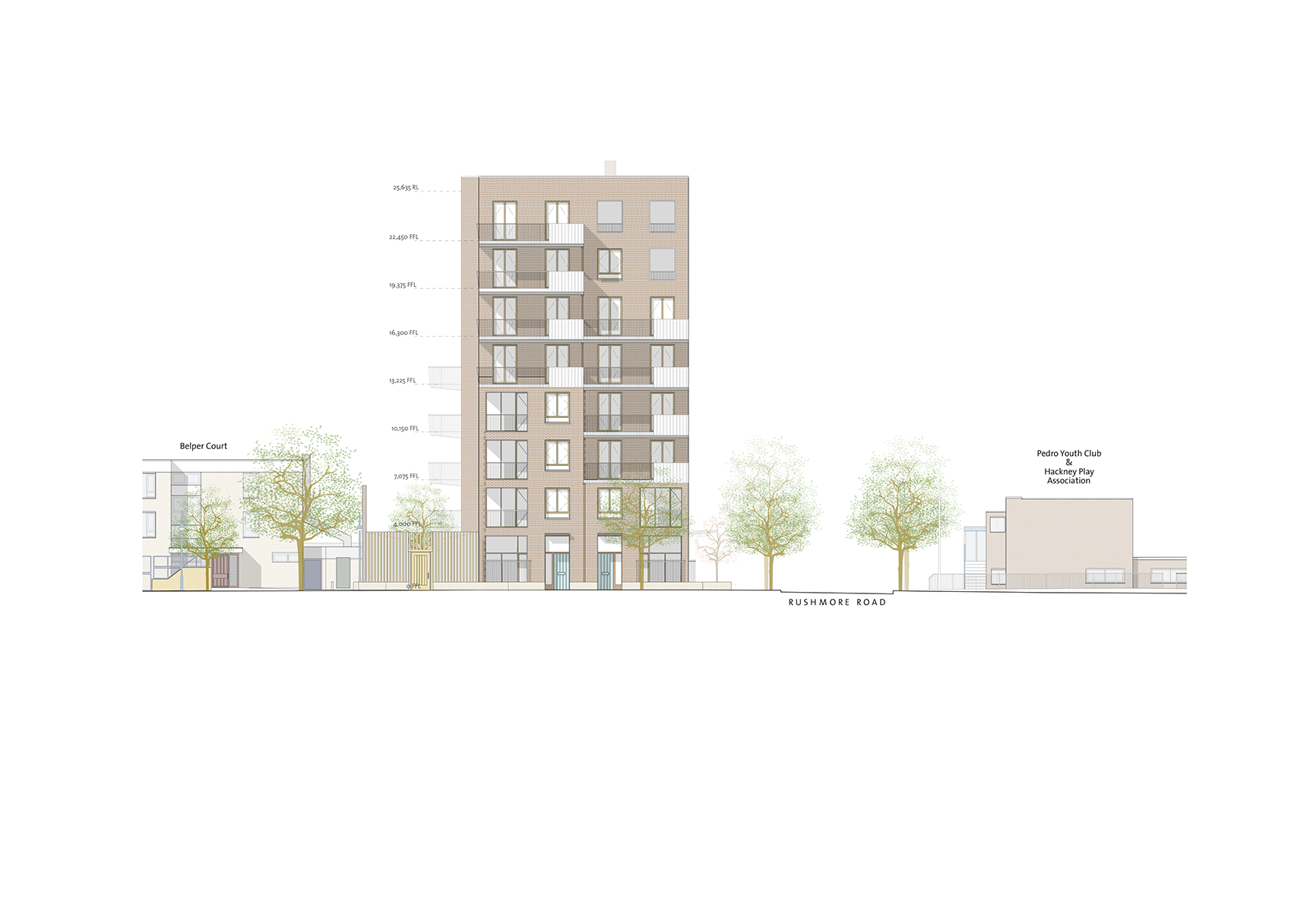 The eight storey section of the building provides an appropriately scaled urban presence at the head of a neighbourhood shopping square. 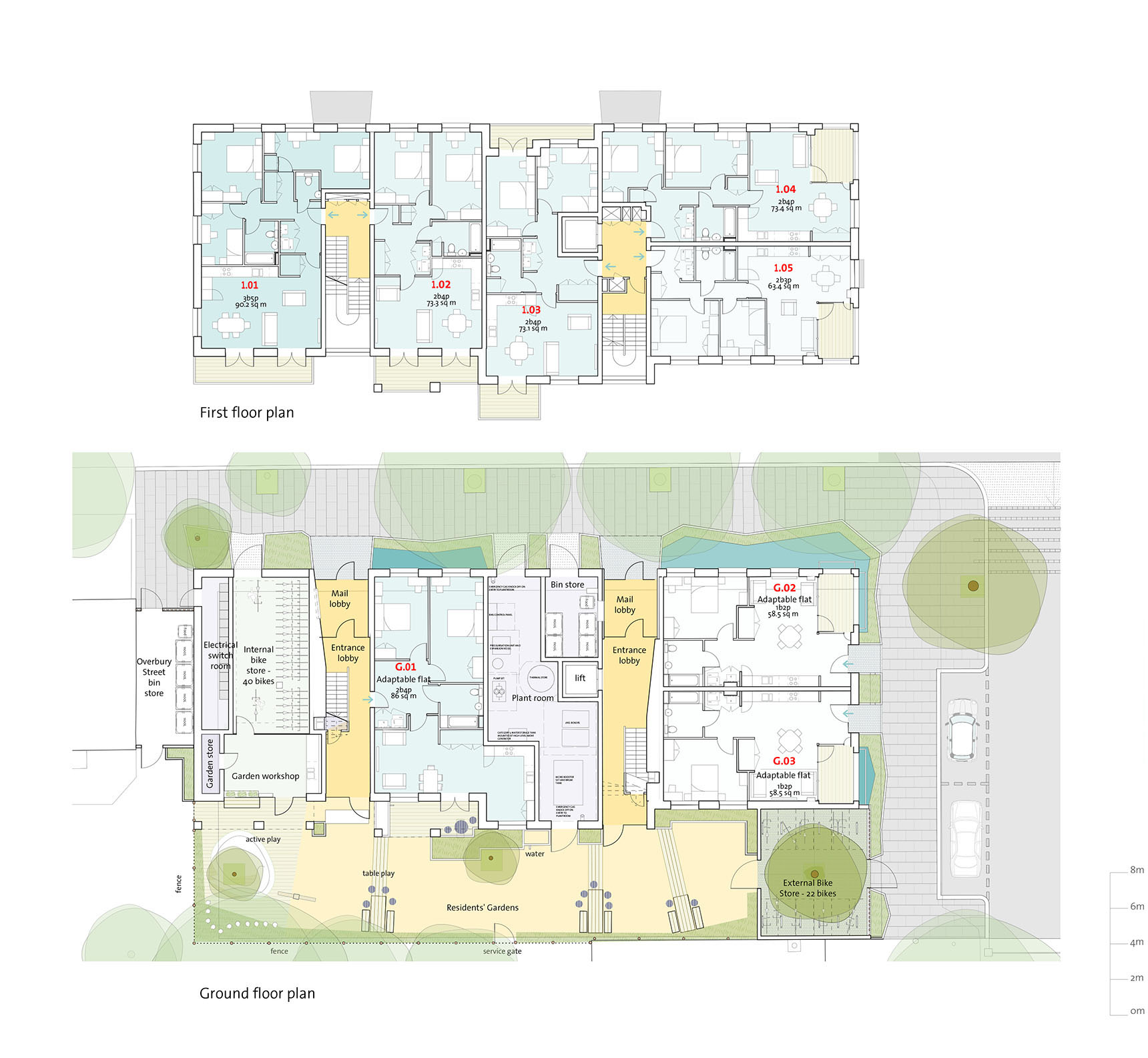 There are 26 homes ranging in size from 1 to 3bed, and including 3 homes adaptable for wheelchair use. Half are for social rent, half shared ownership. The top two floors of the block are occupied by 4 duplex units.

We consulted all through the early design stages of the project with neighbours and local residents from the Clapton Park Estate, the cohort from which the new residents of the building will come.

All homes are dual aspect and have either a projecting balcony or an embedded loggia, creating an airy outdoor room that is simultaneously sheltered and open to the air.

The design of ground floor homes uses planting and railings to carefully mediate the proximity of domestic space to the street corner.

The block’s common areas are generously sized and light-filled, and are configured to promote path-crossing and interaction between residents.

On the south side of the block is a communal garden designed after extensive public consultation. Our design creates a playable landscape in the limited available space. It is easily accessible from the two lift and stair cores.

One of the cycle stores is an open yard enclosed by a bespoke aluminium and timber screen. To either side of a central tree are cycle racks under lean-to roofs. 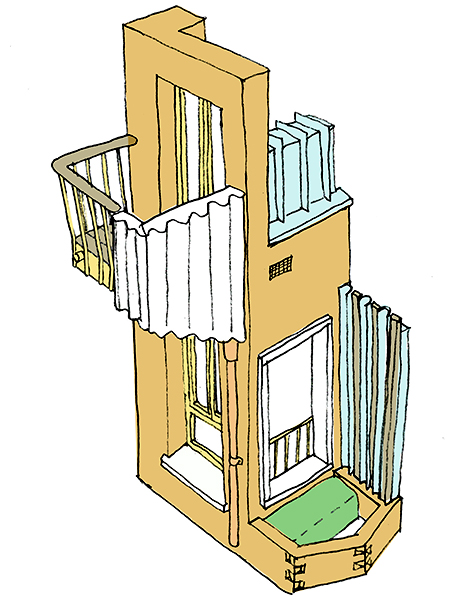 A collage of some of the particular details found in the design of the building.

Sketch detail of the garden elevation, showing the loggia outside the communal garden room. 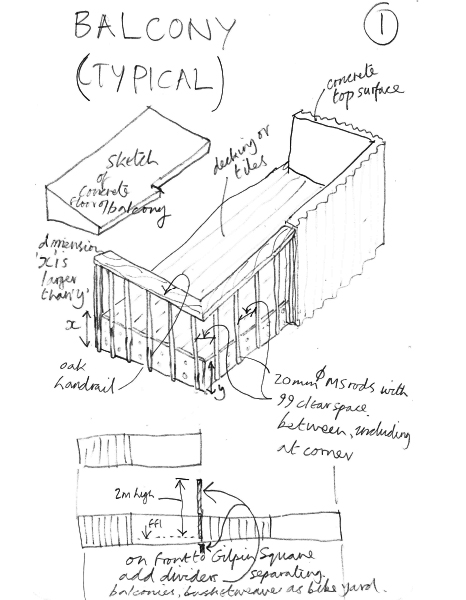 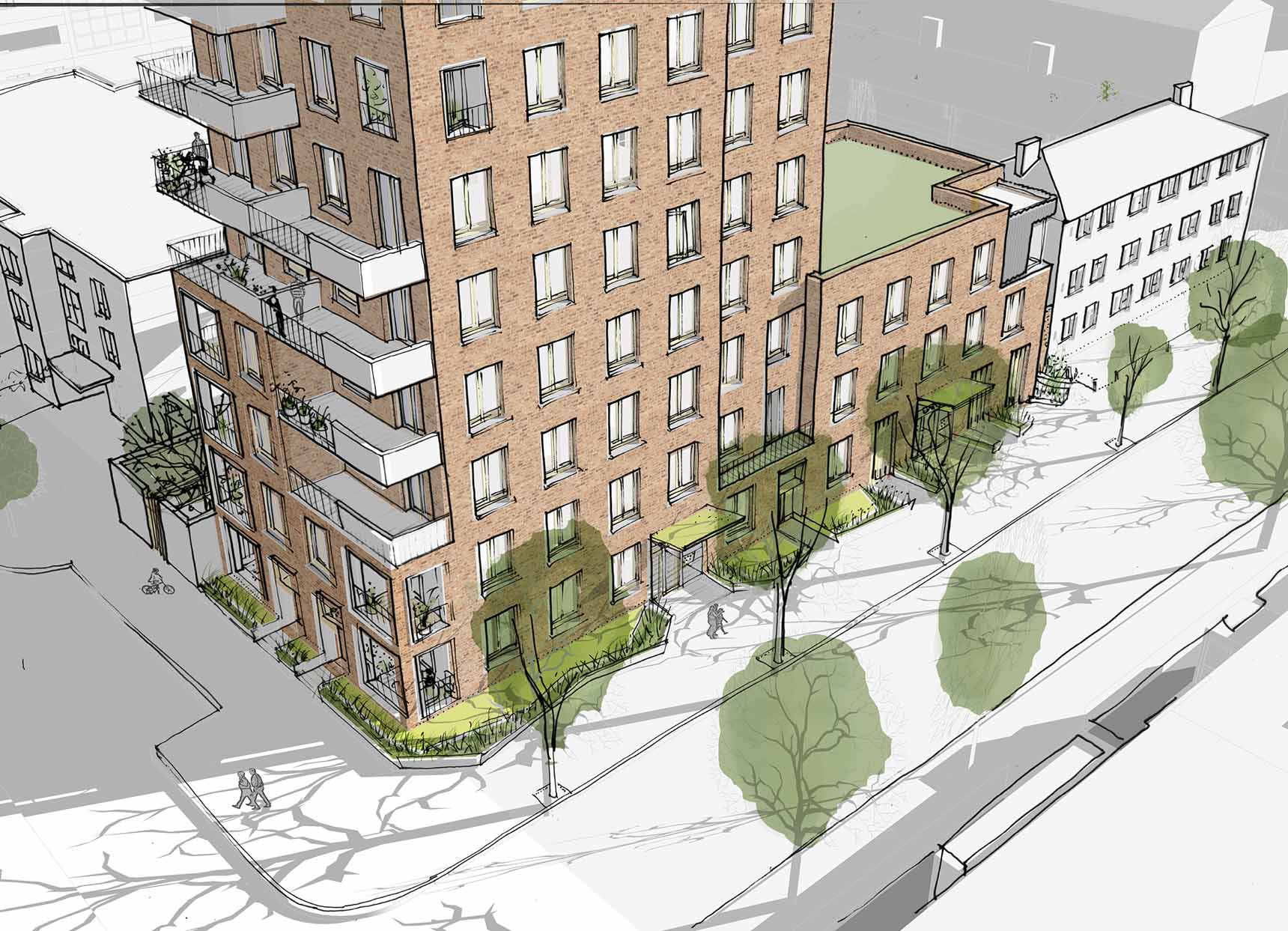 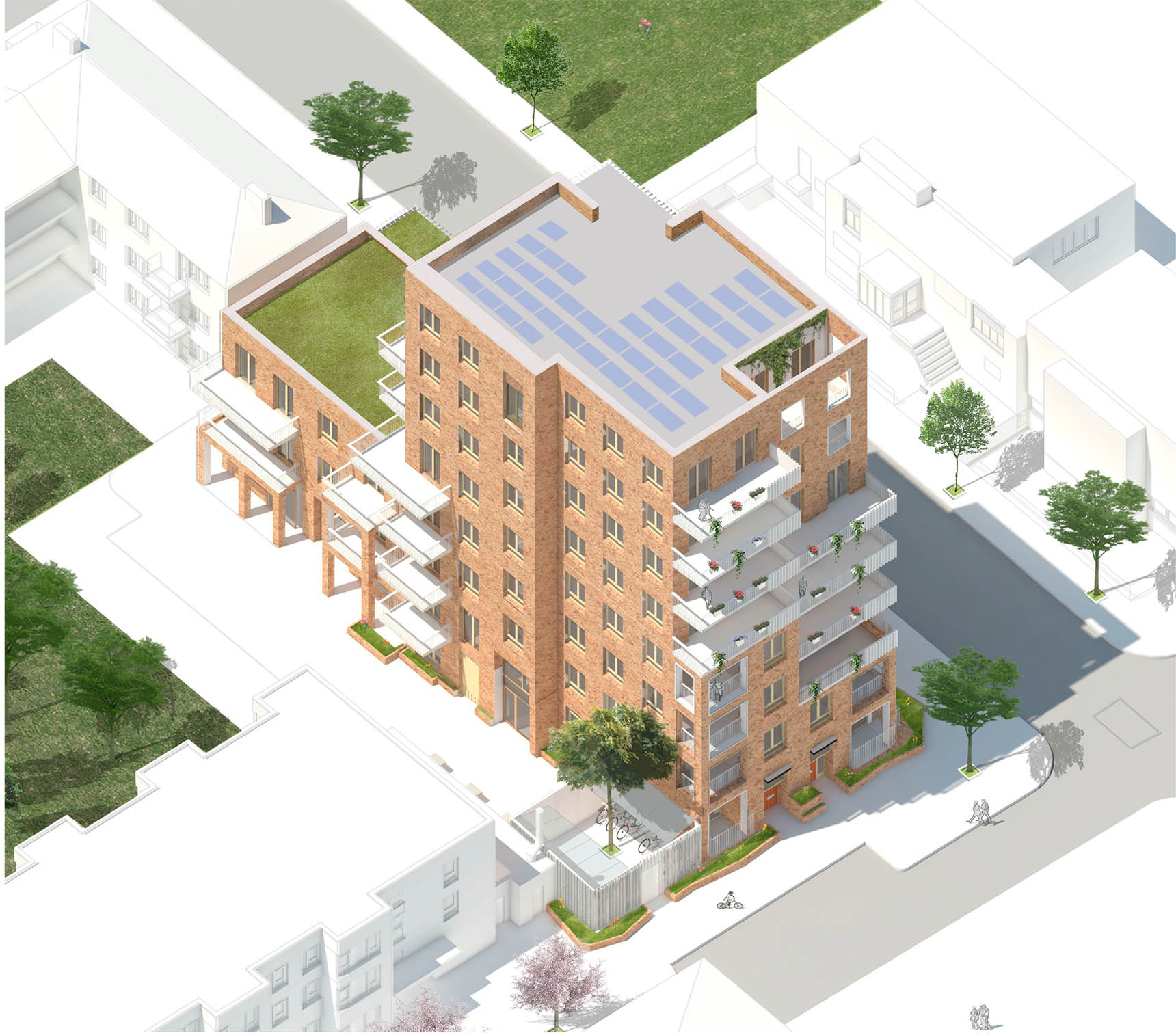 Aerial view showing clearly the two parts of the building, one part eight storey, the other three. 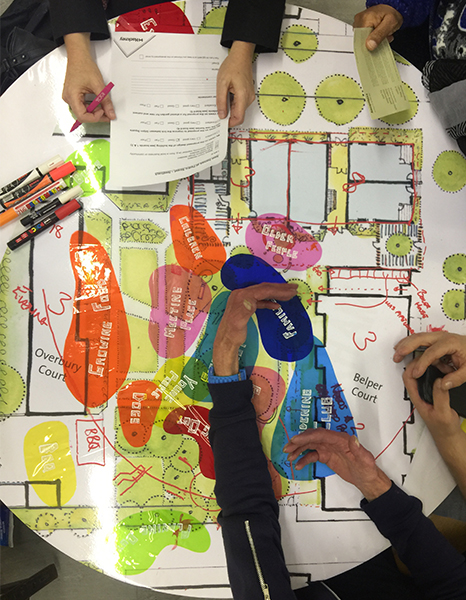