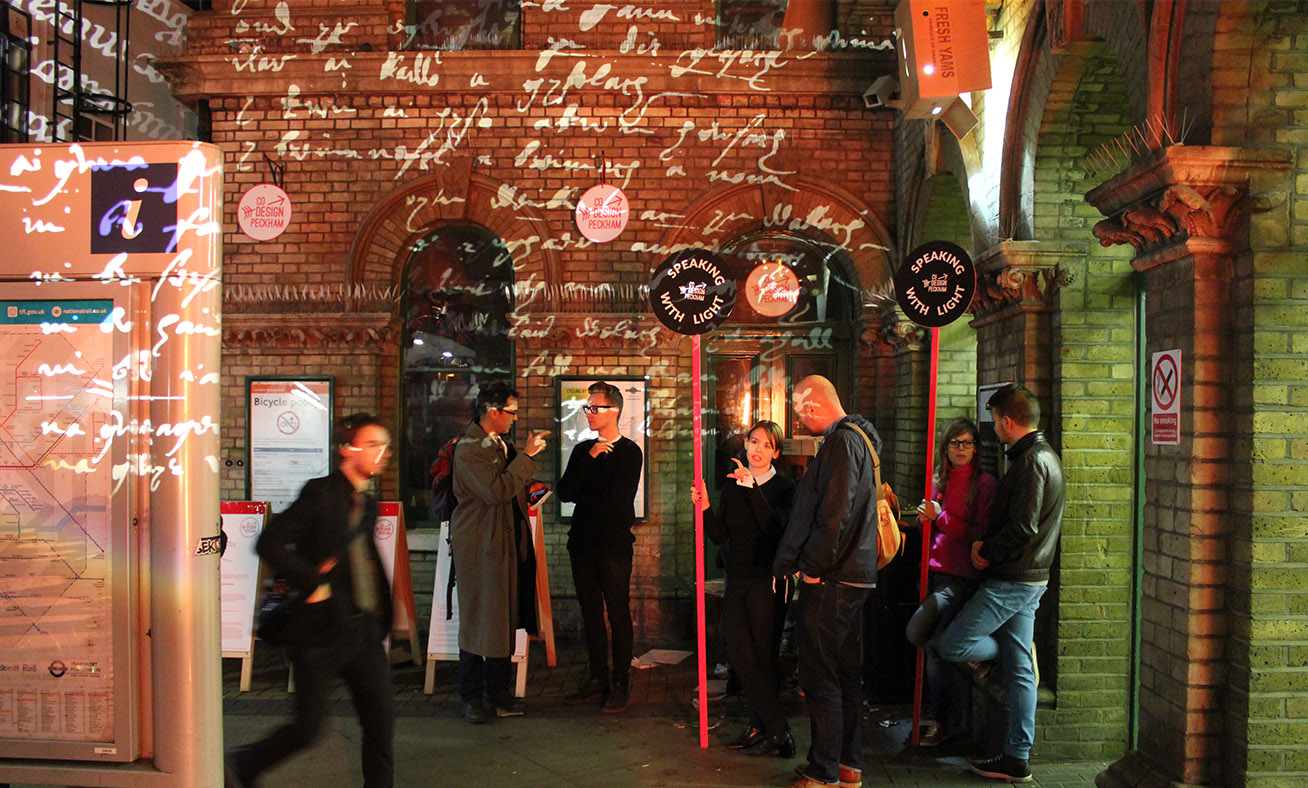 For three months in the summer of 2015, we engaged with an enthusiastic group of local residents, pressure groups, traders and local creative industries to envision the future of public space at Peckham Rye station in south London.

Southwark Council and Network Rail were proposing to demolish the buildings obscuring the station to create a new public square which would front the listed station building. However, the problem was that the buildings slated for demolition housed much-appreciated local shops and amenities such as greengrocers, nail-bars and hairdressers.

Local people were concerned that these businesses would be driven out and replaced by a more generic offer.

Ash Sakula was appointed by Southwark to undertake a community engagement exercise with all the stakeholders. By discovering and documenting their requirements we could draw up a brief for the future development which would be acceptable to all.

We opened and manned a co-design shop in the station, held many events and workshops and engaged with enthusiastic groups of local residents, campaigners, traders and local creative industries in order to devise more user-friendly plans. Our slogan was 'everyone is a co-designer'.

The findings were summarised in what we called The Atlas of Aspirations covering everything from a desire for trees and WCs to strategic thoughts on spaces for innovation and local transport issues. Its recommendations included:

·       Enable people watching to encourage life in the public realm and cut down on social isolation.

·       Encourage a delicate“urban ecology” where new uses grow incrementally out of what is already         going on.

·       Include and encourage nature with trees and plants.

The Atlas formed part of the brief to the team taking the design of the square forward and has helped guide its subsequent development. 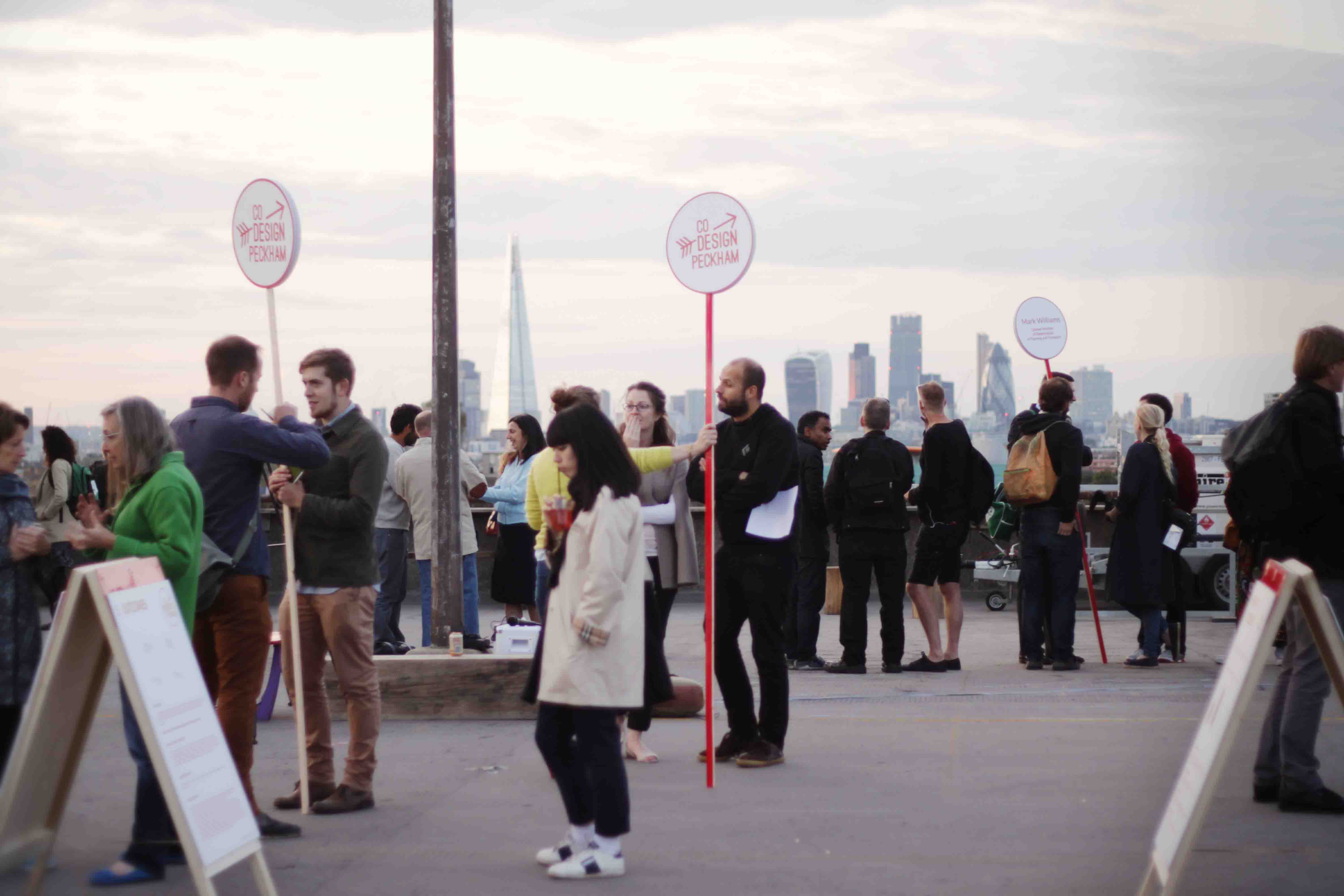 The launch event was held on the roof of Peckham's multi-storey car park, with panoramic views over the site and the whole of London. 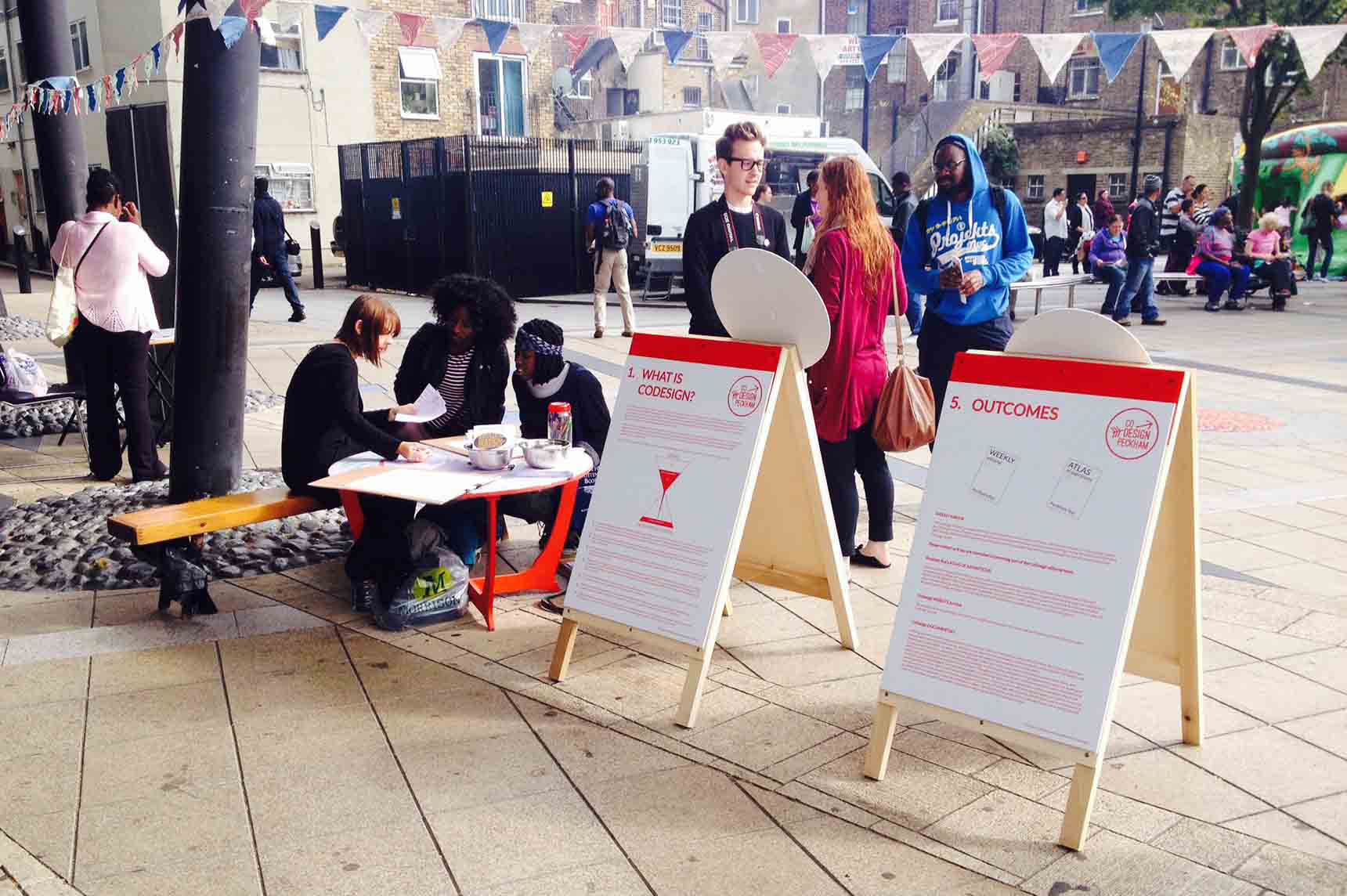 We engaged with locals in a variety of ways. We held dozens of events in Peckham, including the grand launch event, breakfast clubs, working lunches, a treasure hunt, Saturday drop-in workshops, talking with traders, a ‘Light Night’ where we projected words and images onto the station building, and a spoken word poetry festival. As well as this, we opened a co-design shop on site, set up a website, and leafletted 10,000 local people. 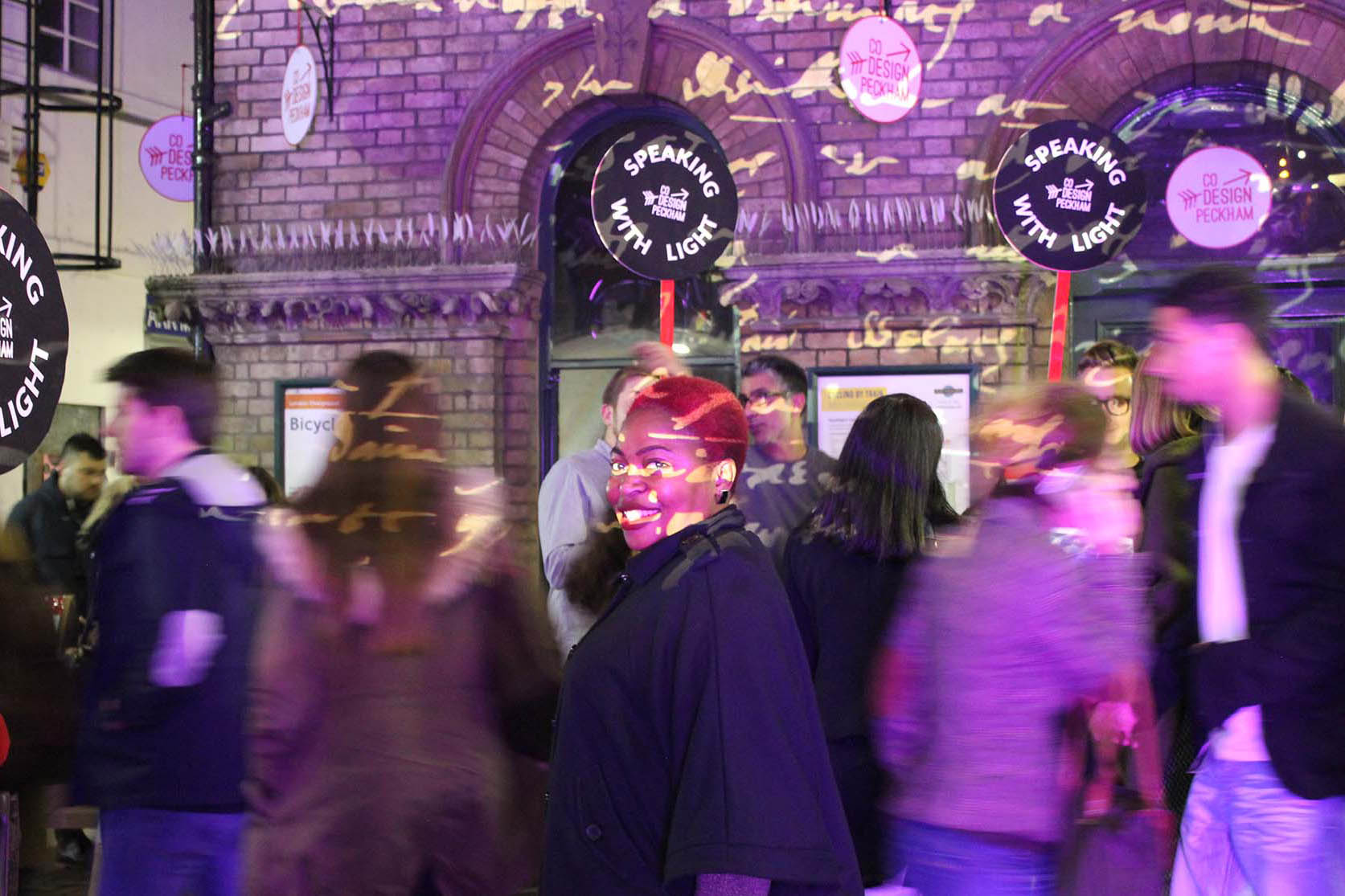 A moment from the Light Night event. 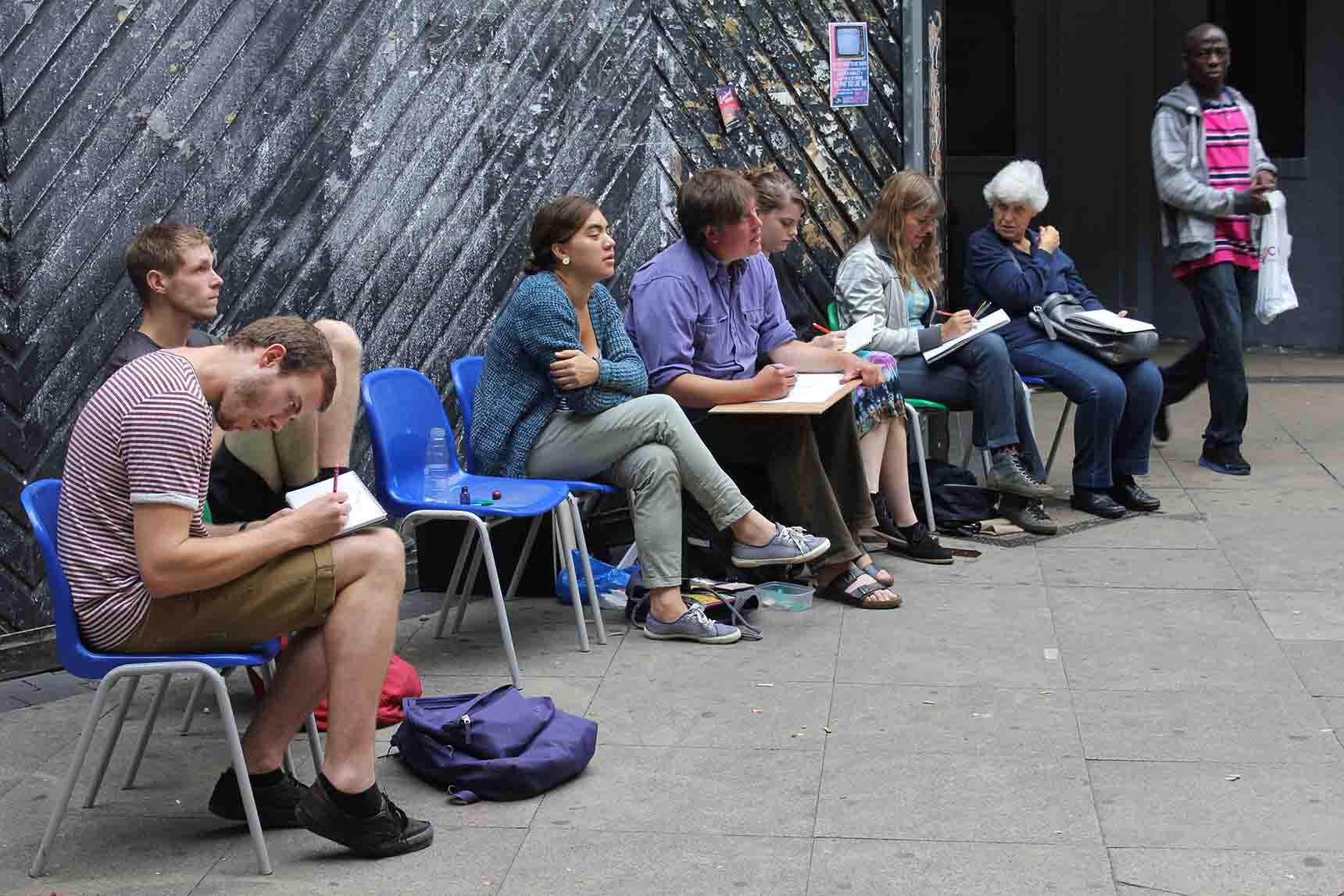 Another event: getting to know your neighbourhood by sketching it. 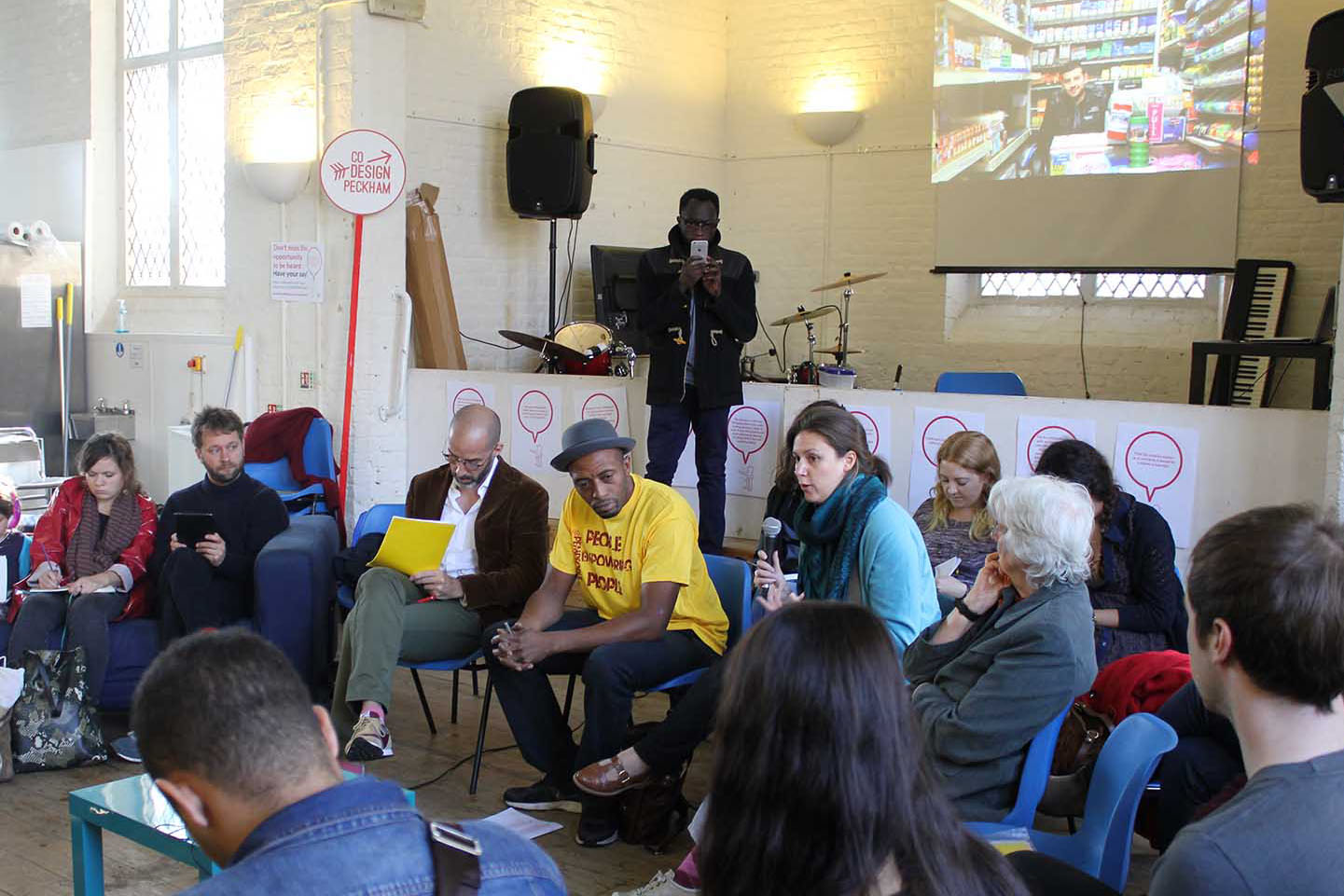 Part of the Big Conversation, where ideas were proposed, developed and tested live jointly between the design team and the community. 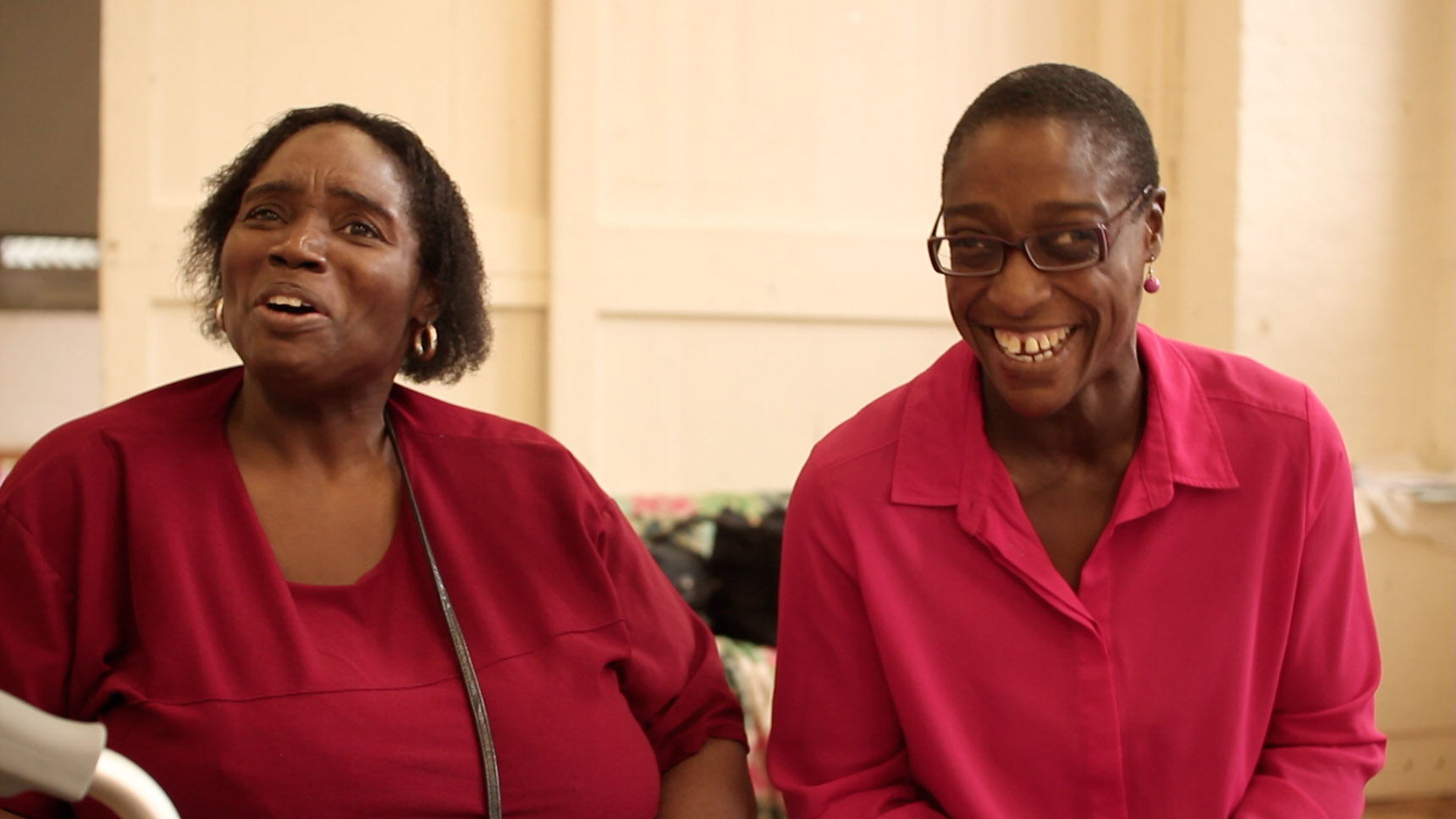 Everyone is a Co-designer. 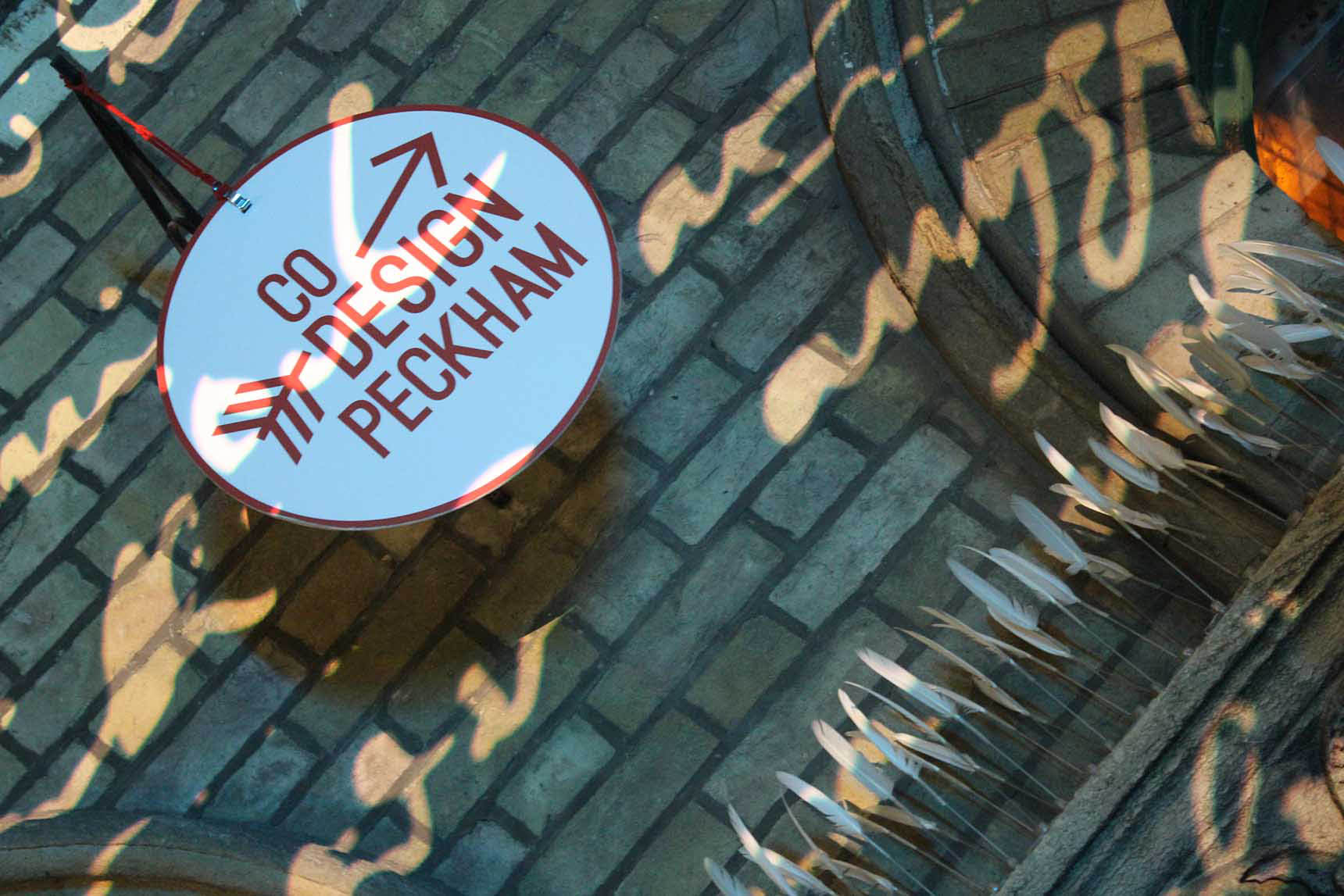 An image from Light Night.

Read more about the thinking behind this project:
#placemaking
#codesign
#conviviality
#reuseandheritage 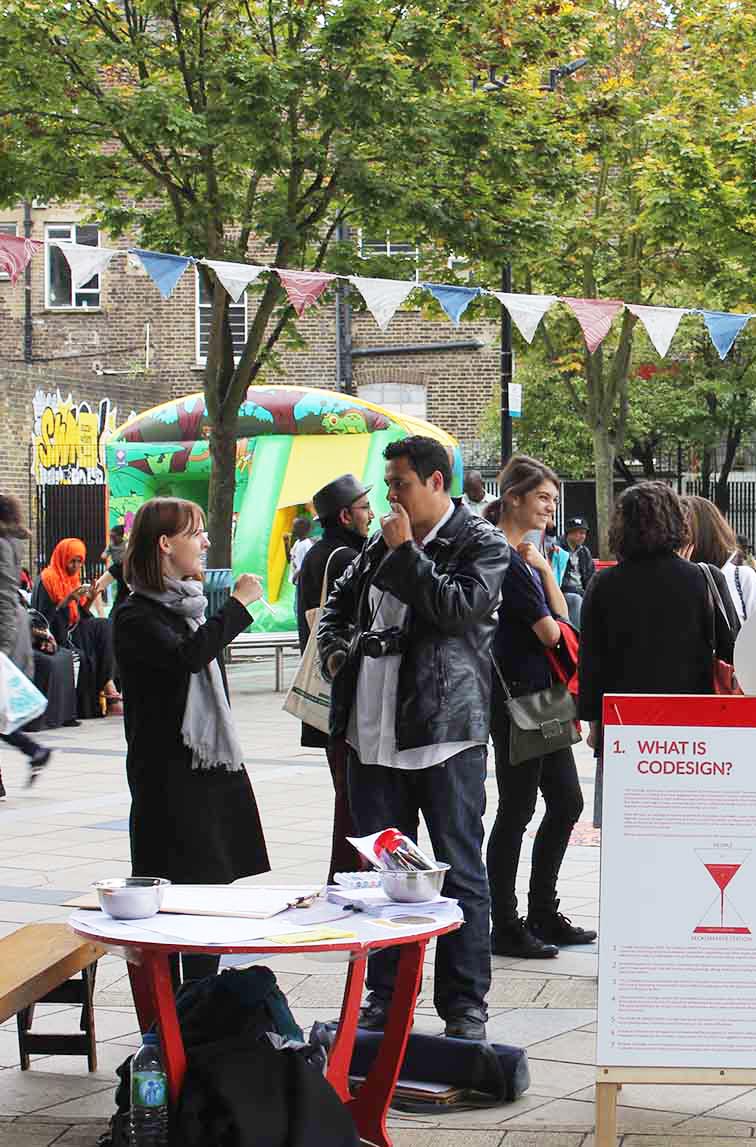 Different approaches to engagement, at different times of the week, in a variety of places in the locality, meant we captured the views of the widest possible range of stakeholders. 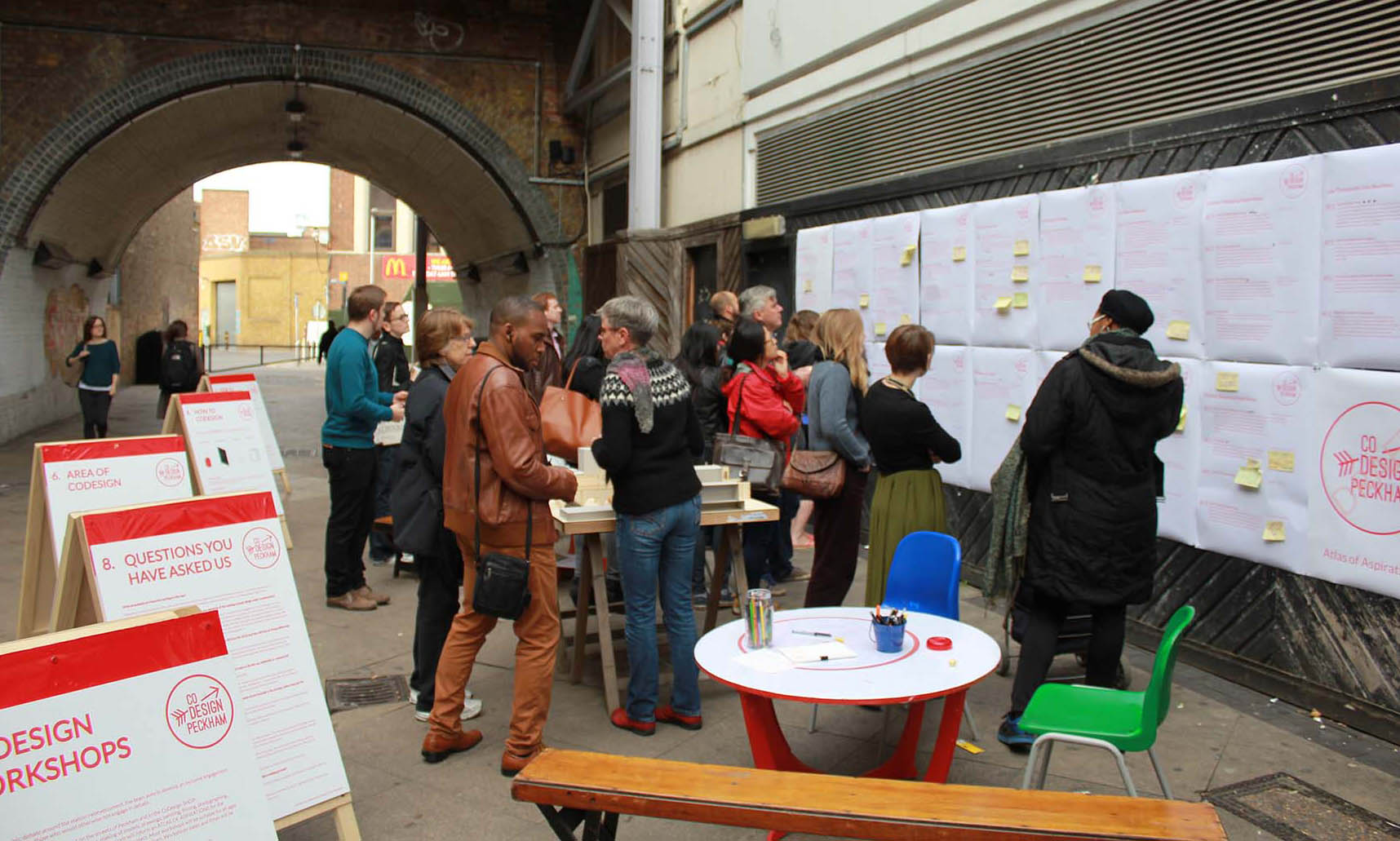 Towards the end of the process we posted drafts of the Atlas of Aspirations to get feedback from the community. The drafts were posted online as well as on the walls of the railway viaducts. 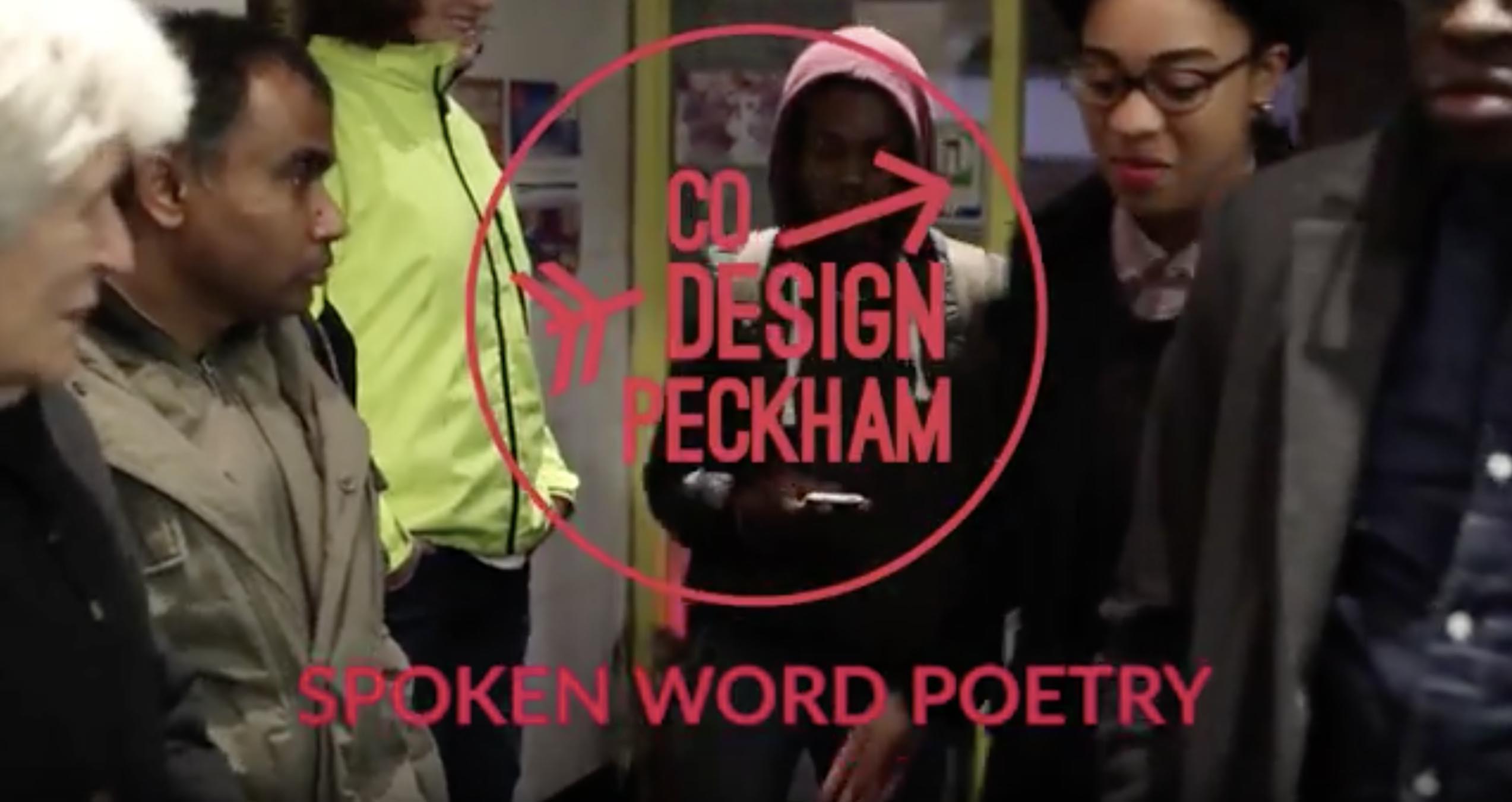 We created a youtube channel for the project, with videos featuring local poets and an archive of some of the discussions that took place. 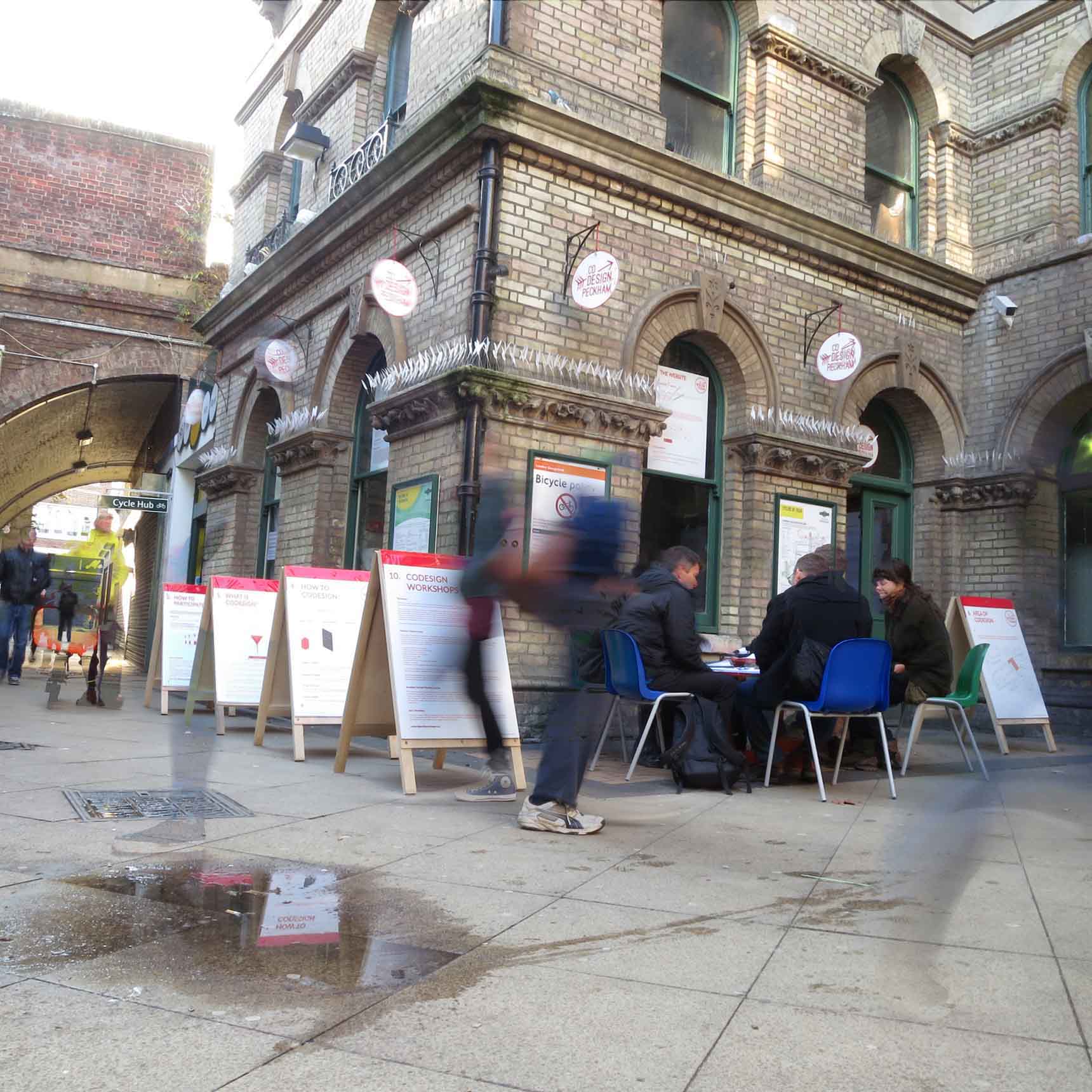 Our co-design shop was a pop-up, taking over one wing of the station. 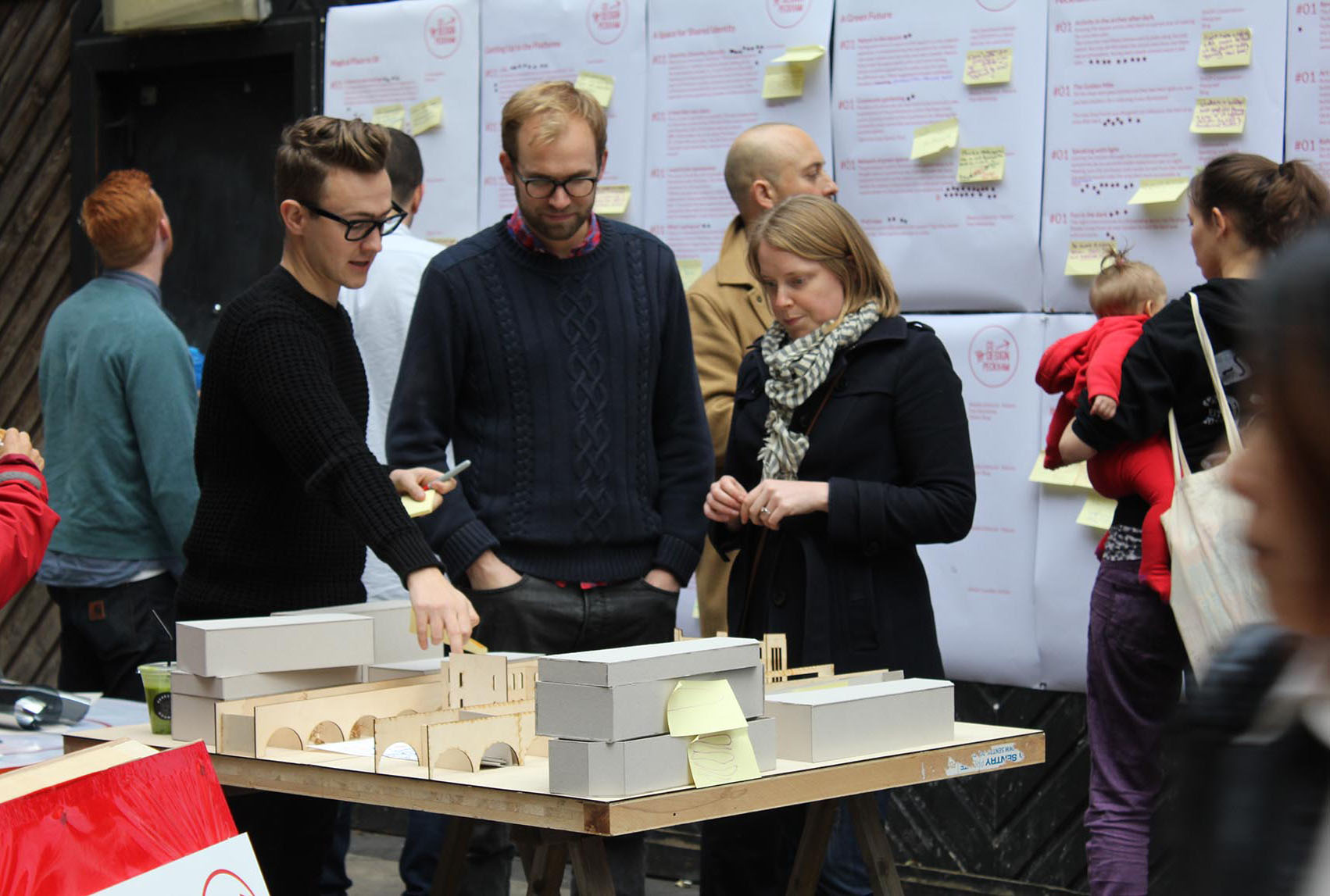 Collaborators: Peckham Vision, What If, Commonplace