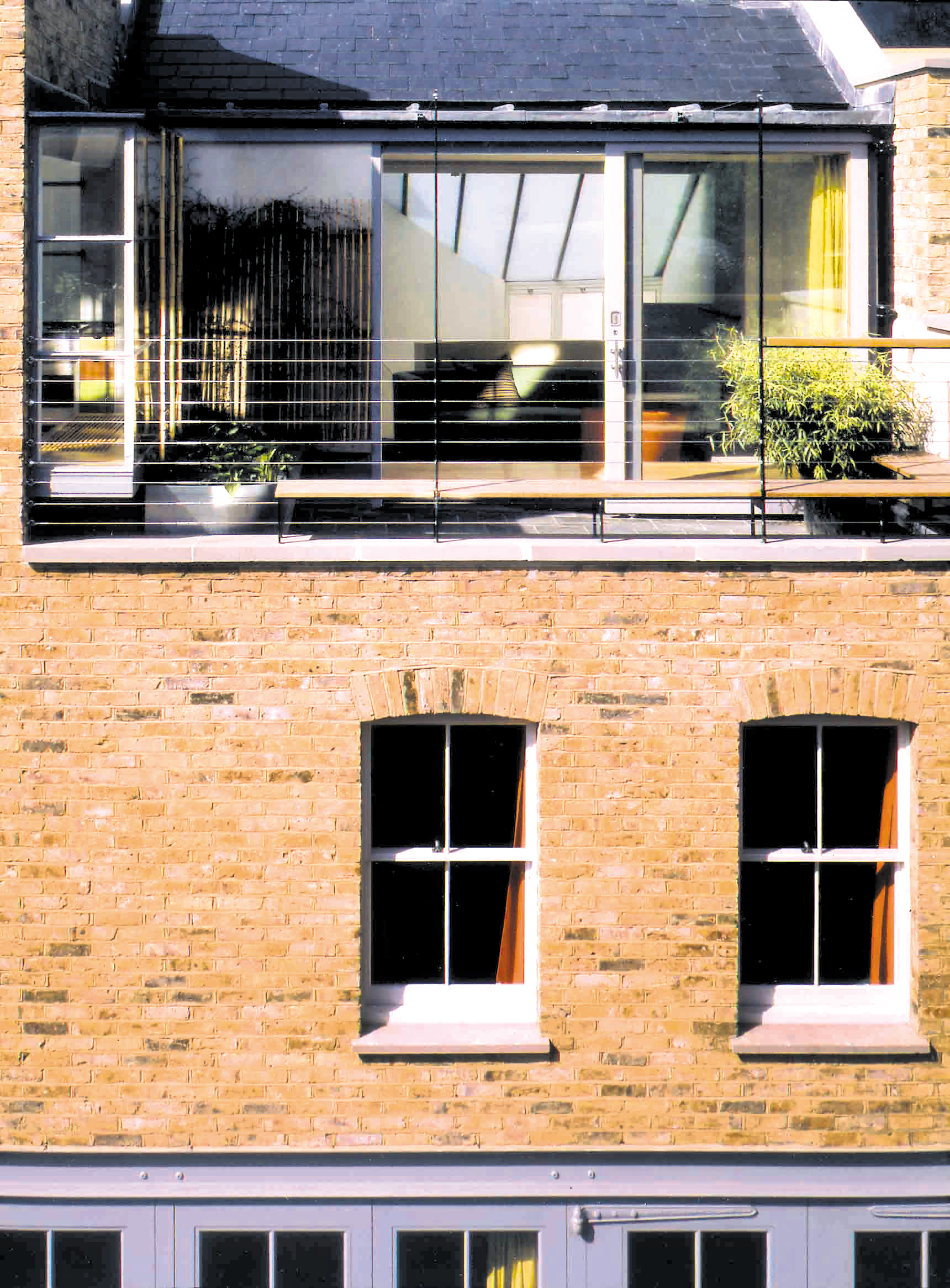 London mews are back alleys once lined with workshops, stables and servants' quarters that served the big houses on the main streets. Today, many mews buildings have become homes and, in doing so, have been sites of architectural experimentation.

This end of terrace house in Bloomsbury occupies a small triangular plot that completes a terrace of mews houses. Completed in 1996, it was Ash Sakula’s first new building. The front elevation appears at first sight to play with the normal mews elements of sash windows and garage doors. But there is more going on besides, better seen from the side or the rear where the house assumes a more contemporary idiom. 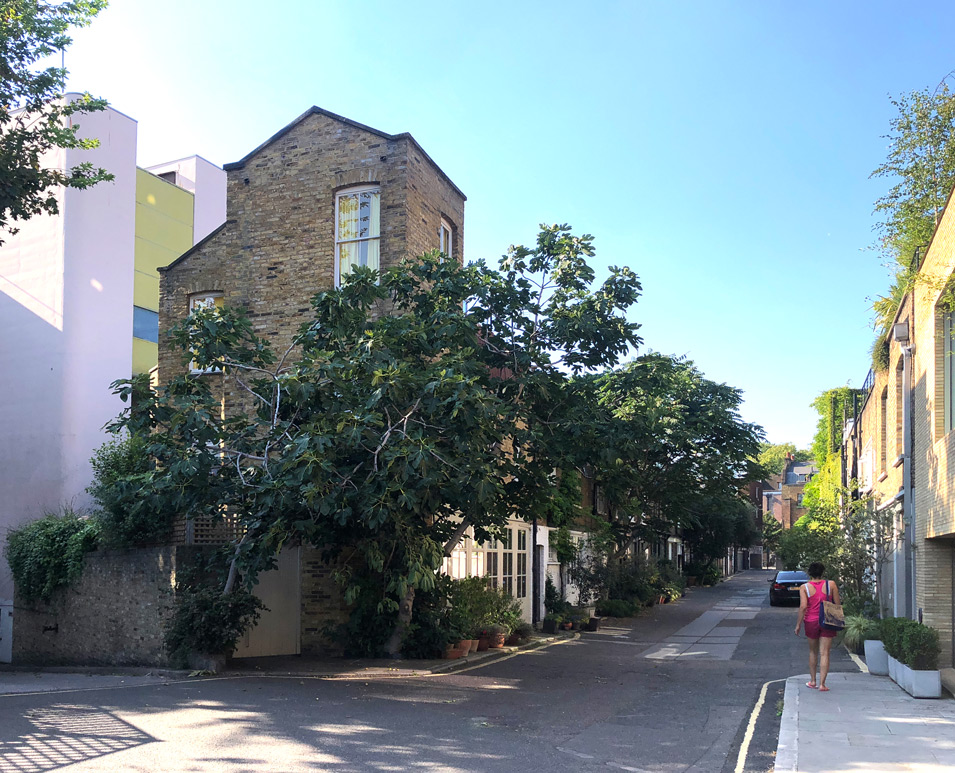 The ground plan of the house follows the triangular shape of the site, which was dictated by the course of a now-buried underground river, a tributary of the River Fleet. The upper storeys cantilever out, swinging the house's orientation towards the open school grounds and trees to the south. Inside, this gives more space and better shaped rooms.

The uppermost storey is set back from the street, emphasizing the corner tower which book-ends the mews.

In this way, the house earns its place as a significant street corner. Its tower acts as a foil to the apartment block lift shaft behind.

Unlike its predecessor on the site, a single storey shed, it forms a townscape hinge at the entrance to the mews, and helps repair the damage done to the urban fabric in the nineteen seventies. 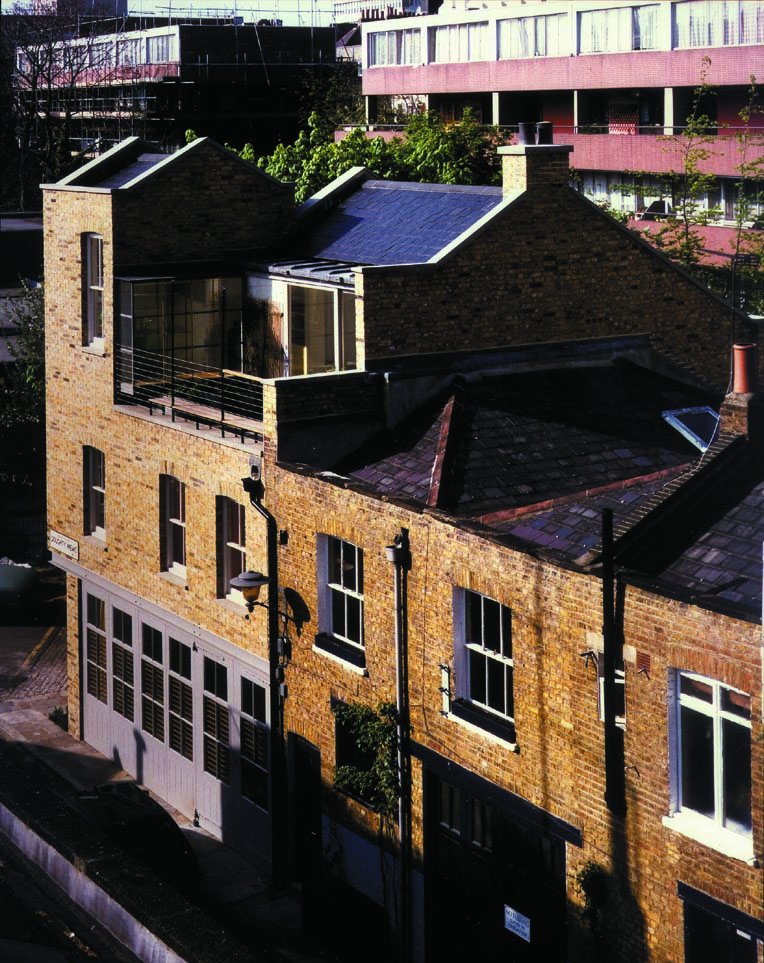 The new house book-ends the terrace of mews houses. 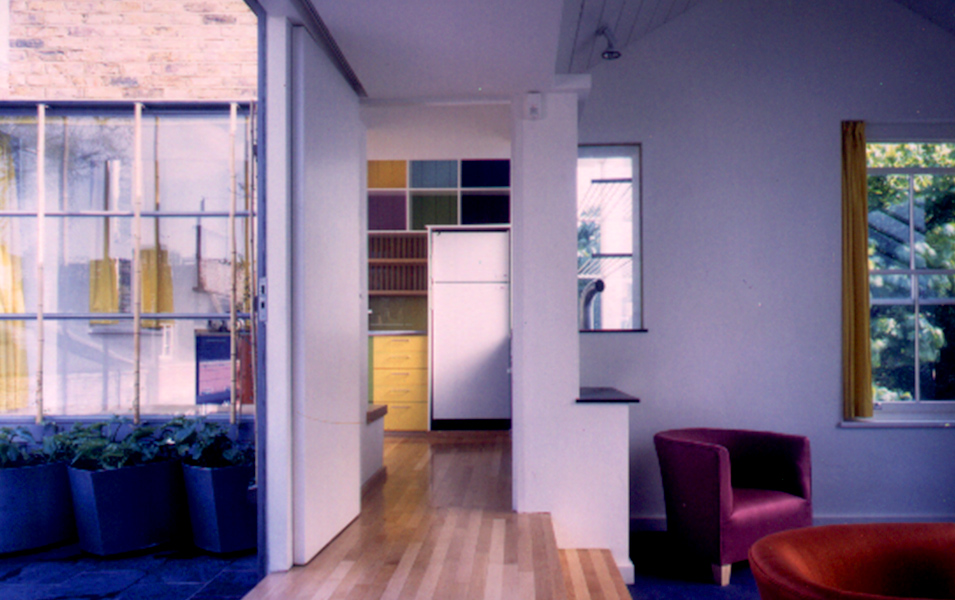 Looking towards the top floor kitchen with terrace to left, and living room to right. The kitchen has windows on all four sides. 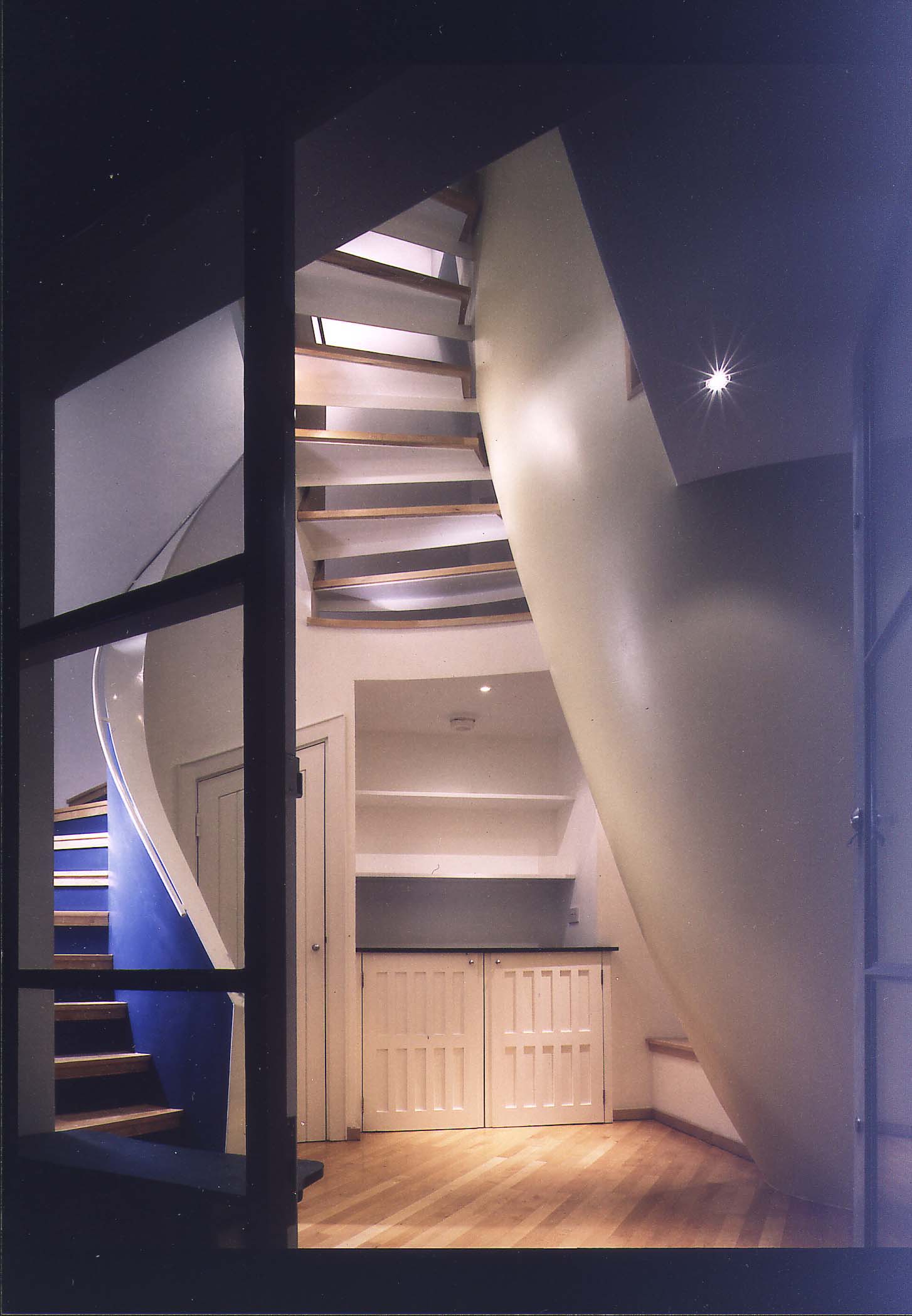 In a build process that pre-dated computer-generated construction information, the complex geometry of the double-curved tulip-form against which the staircase rises had to be communicated to the contractor by means of full-size paper templates. Horizontal ply formers were linked by struts forming the curve of the tulip, clad with expanded metal lathing and plastered. 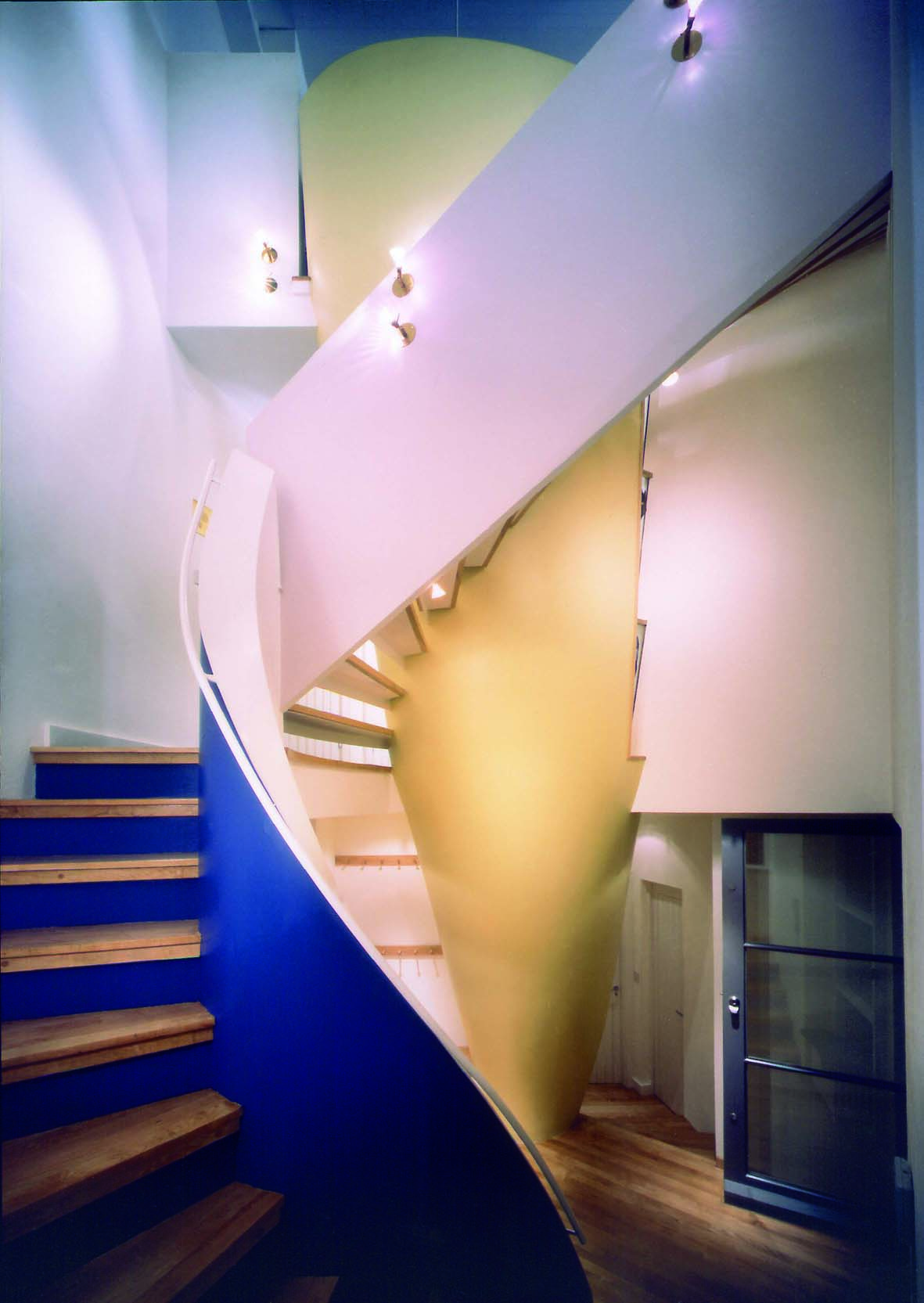 Expanding as it rises, the tulip forms a storage pod at ground floor level, encloses a WC on the first floor and becomes a curved balustrade for the top-floor living room.

Internal walls were wood float-finished to give them a rough sandy texture, while the plaster of the tulip form was successively rubbed down with wet-and-dry sandpaper to achieve silky smoothness.

By contrast with the tight spatial planning in the rest of the house, the stair connecting the three floors is sculptural and spatially generous. 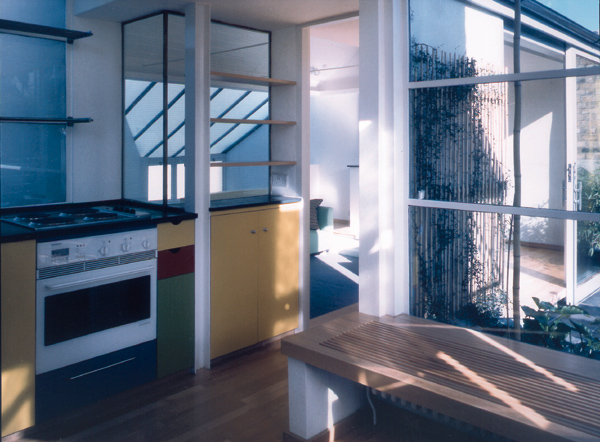 Doughty Mews is a new-build single-family 3 bedroom house on a very tight triangular site. In a house this small, spaces must be close-packed like pebbles in a jar. On each of its 3 storeys, rooms jostle with each other for the limited available space.

The kitchen and living room are on the top floor where there are longer views. They give onto a rooftop terrace overlooking the mews which becomes part of the perceived volume of both rooms.

The kitchen is as compact as possible, with worktops and seating pushed out into glazed cantilevered bays to gain crucial inches. The tower form of the room means that it is lit from all four sides. 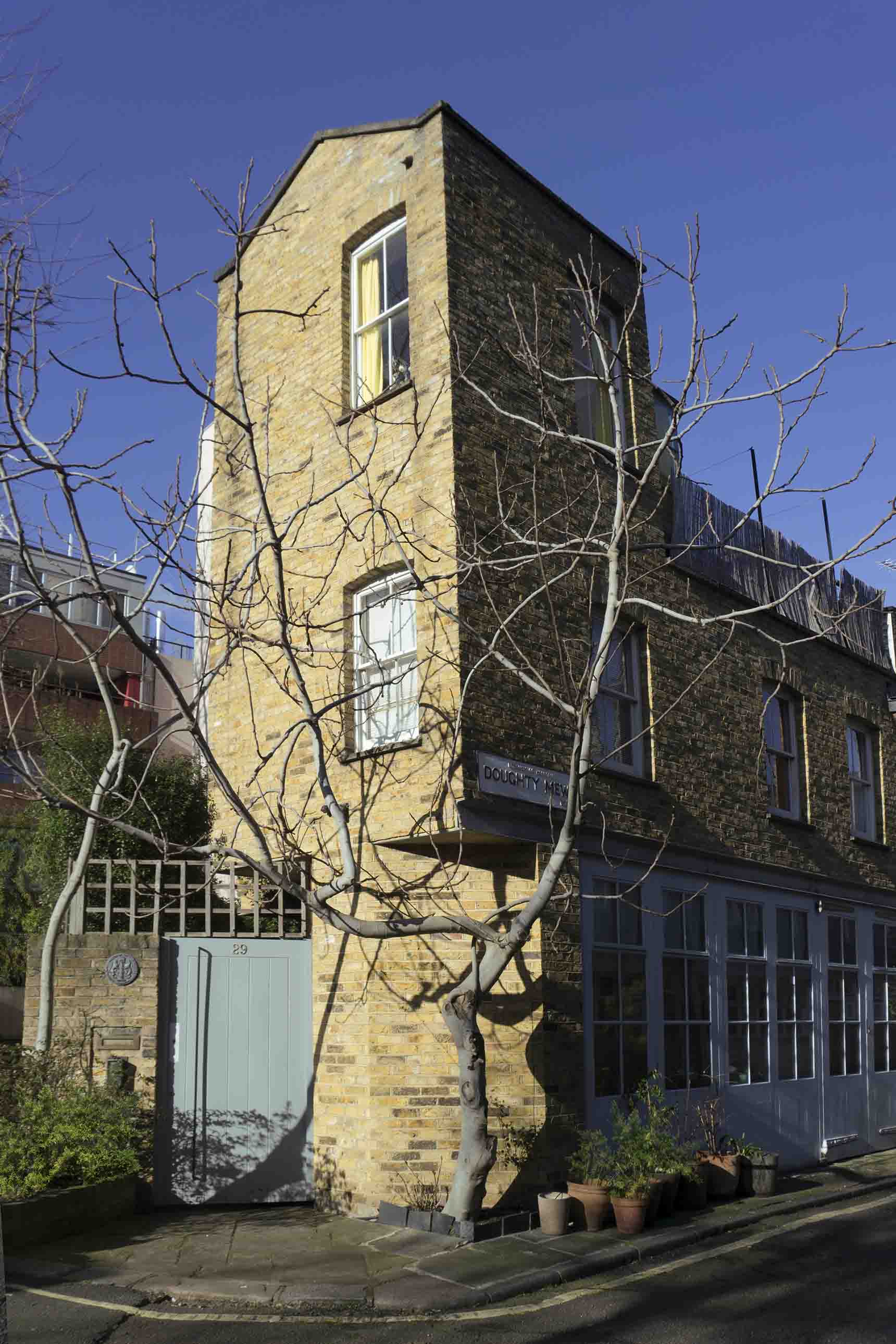 Twenty years on from completion, the turkey fig we planted has become a sizeable tree.

Read more about the thinking behind this project:
#homes
#tactility
#reuseandheritage
#placemaking 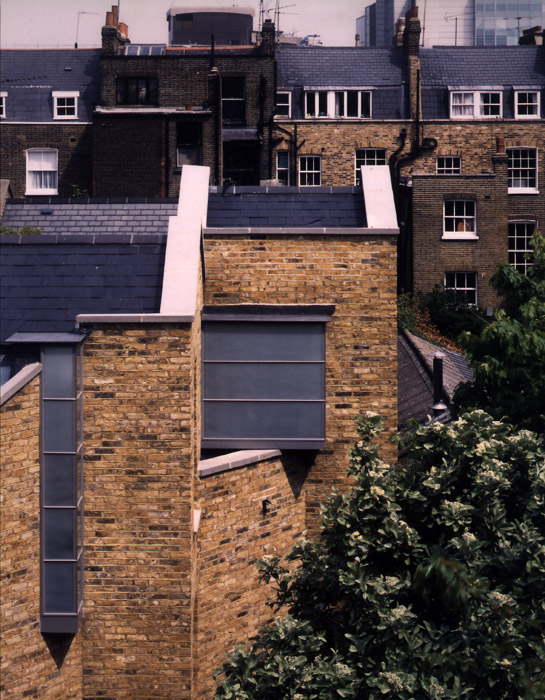 At the rear of the house, the transitions from triangle to square are more apparent, and the architecture is more abstract. Obscured glass protects the privacy of the block of flats from where this photograph was taken.

Ground, first and second floor plans. Living is on the top floor, sleeping on the middle floor and working on the ground floor. On the bedroom floor curved walls make best use of the limited space available. 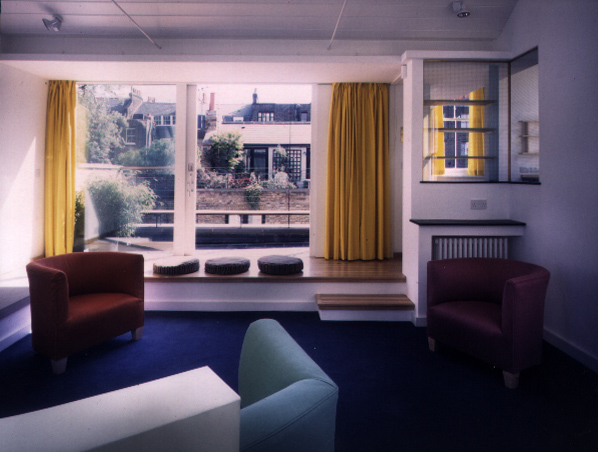 A view from the top of the stairs to the living room, terrace and kitchen. 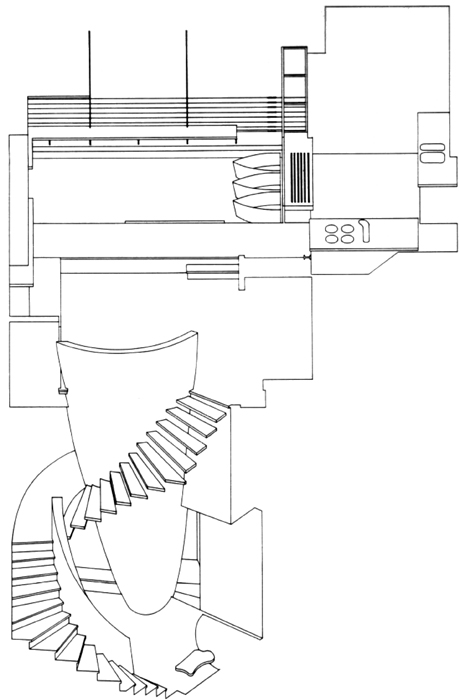 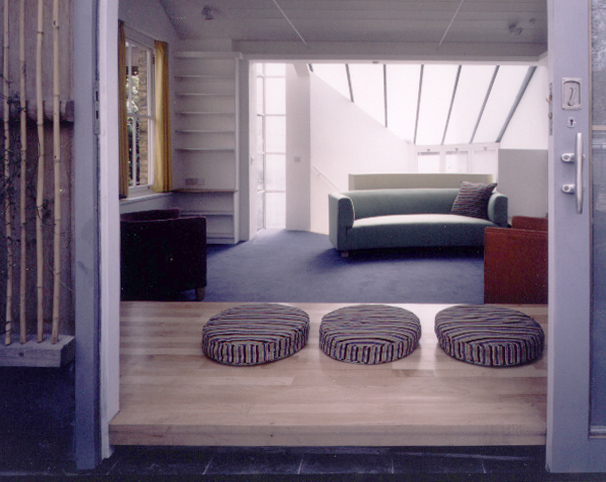 A view from the terrace looking towards the skylight over the staircase. The sliding doors were detailed to avoid any visible track on the step down from room to terrace.