Wickside is currently a polluted, canal-side industrial no man’s land in Hackney, East London, a waste transfer site with no homes and just 21 jobs.

Our masterplan, in collaboration with BUJ Architects, received planning approval in May 2018. It turns the area into a thriving, buzzing district with 500 homes and 300 jobs.

A mix of housing, commercial and community space linked by a linear park, it combines old, existing buildings with new ones, creating a syncopated urbanism of small and large buildings which take inspiration from the traditional urban form of the surrounding area.

Early on in the design process we invented the slogan that Wickside is not one place but many. The vision is for a place that people go to for one reason and stay for another.

A highly visible, gateway project, it adds momentum to the regeneration of this part of London. Key new routes link Hackney Wick to Fish Island, bridge the canal and connect to existing and future developments at Hackney Wick station.

Wickside was Overall Winner in the 2017 New London Architecture Awards.

The video above communicates our early vision for Wickside. The film created a narrative and a brief for the project, and helped all stakeholders unite behind a shared vision for the area's development. 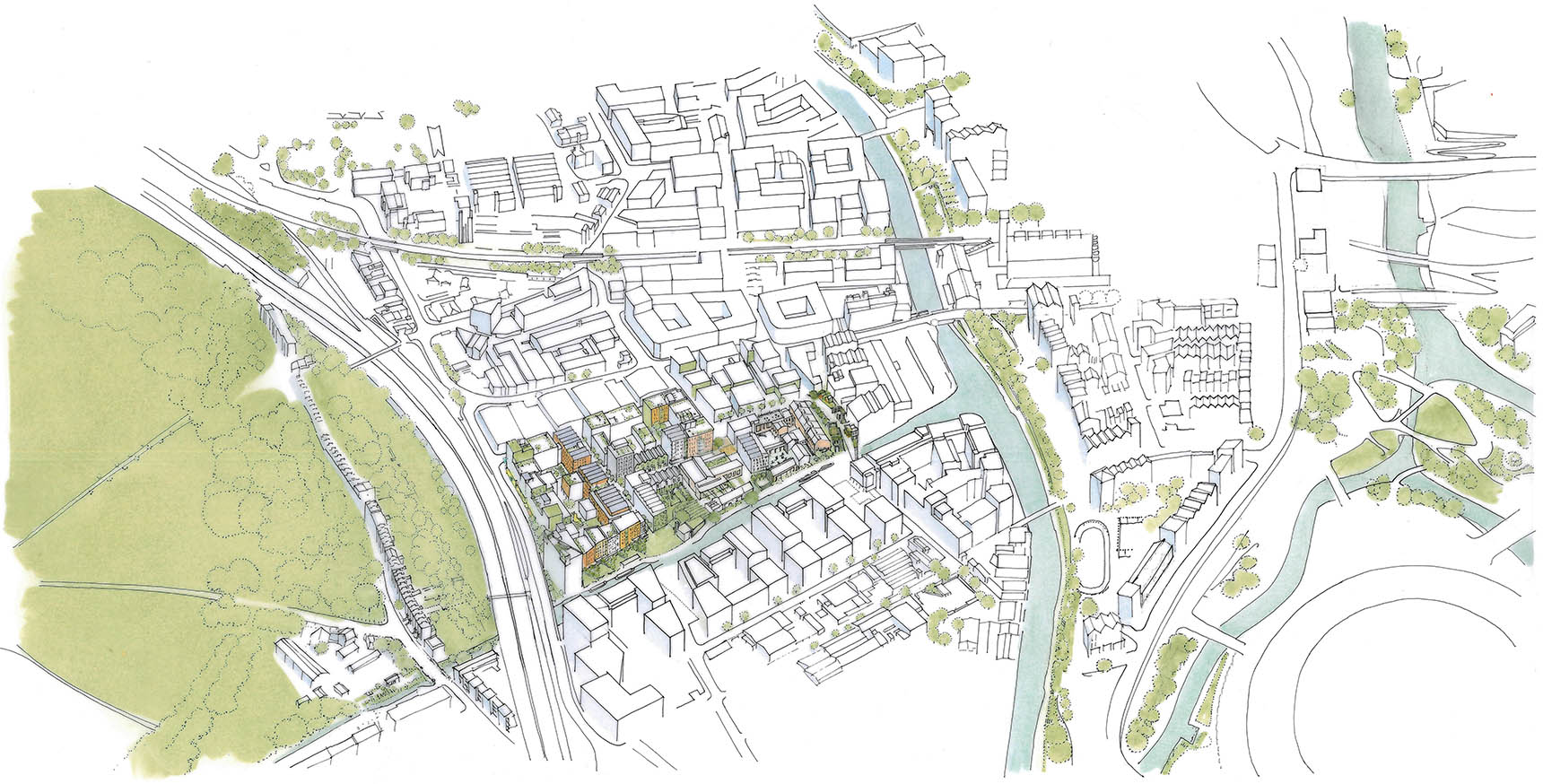 It is bordered on the west by the busy A12 road running down to the Blackwall Tunnel, and on the south by a tranquil canal.

To the north is the recently rebuilt Hackney Wick Station, the central focus for the current transformation of Hackney Wick from a mix of industrial sheds and artists' studios to a neighbourhood combining workspace with new residential development. 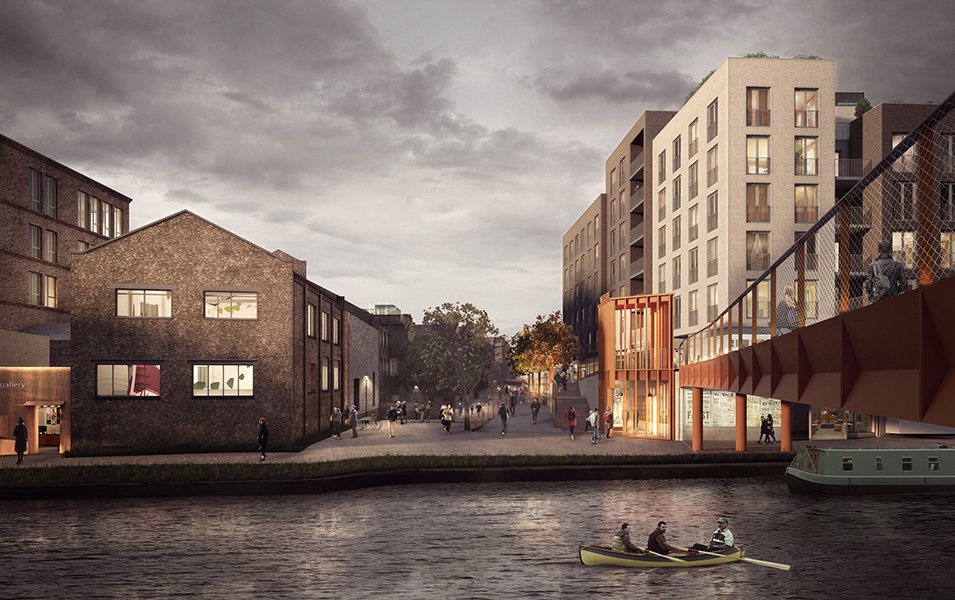 Our inspiration was a kind of urbanism that already exists in parts of Hackney Wick and Fish Island. It is an area famous for its yards, which are open by day and gated at night, and we’ve tried to incorporate the qualities of conviviality that are found in these shared spaces, creating an environment that fizzes with everyday ordinariness.

Some existing buildings will be retained and new streets, yards and warehouses will be added in, referencing the more haphazard, higgledy-piggledy streetscapes of London, in their scale and massing.

A palette of standard asphalt roadways, granite kerbs, concrete pavers and traditional road markings brokers the connection between this new environment and the authentic city around it.

In our public realm design, we used the canalside park as an organising device, opening up the scheme to the south, while forming a protective interface with the A12 urban motorway to the west. Within the park, we created special moments, such as triangular areas of grass, tipped slightly to the south, for hanging out and ground-level trampolines for kids to jump around on.

We also formed a rich roofscape of public gardens, terraces and play areas, accessible to residents. One roof terrace, which is open to the public, has a bar on it. 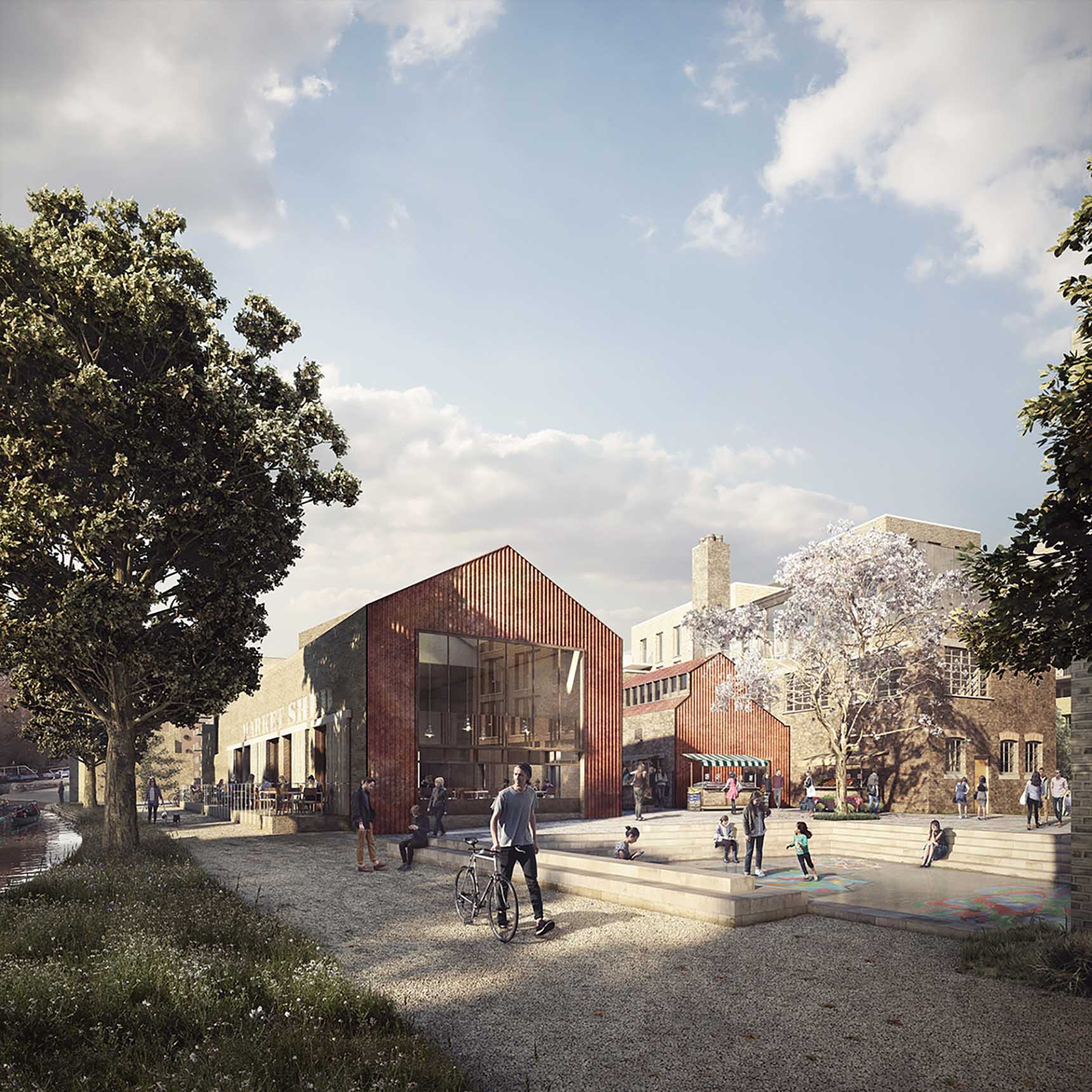 Our re-use philosophy was to work with the site’s history, allowing the damaged brickwork of existing knocked-around structures to articulate the story of the site.

Although these buildings were not important heritage assets, being neither nationally nor locally listed, their retention provides continuity and an abode for shared memories of the former uses of the site.

One shed is turned into a restaurant, another becomes a gallery. Other existing buildings house mixed uses including apartments, creative workplaces, a public roof terrace and an artists’ foundry. A famous graffiti wall is preserved and becomes part of a café.

Reflecting the importance of our historical perspective in developing the design strategy for the site, jury member Dominique Alba commented, “It’s made of history,” when selecting Wickside as Overall Winner at the NLA Awards 2017. 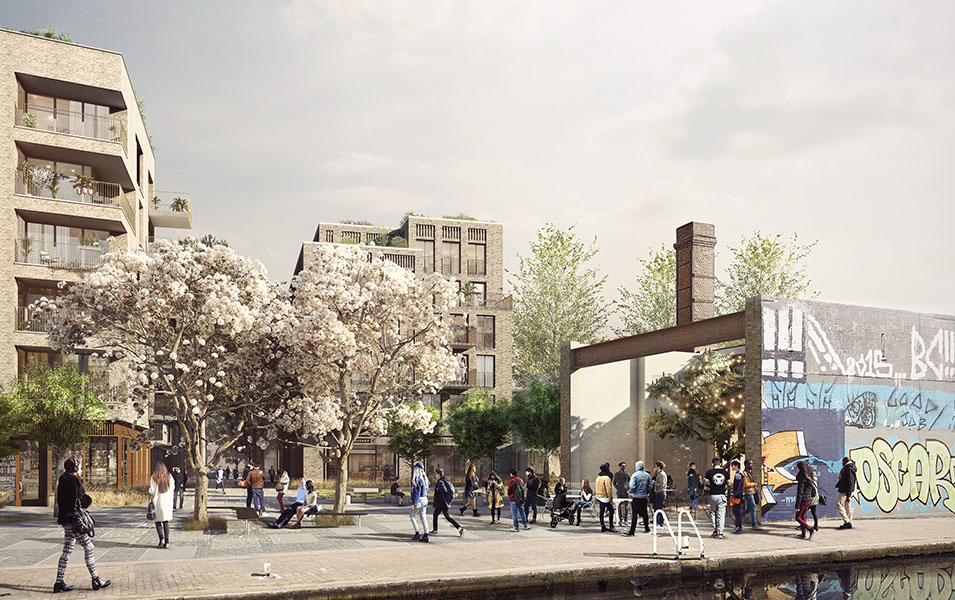 The masterplan describes a vision of plentiful high-density housing with a range of typologies and an imaginative, 24-hour mix of uses and activity generators: creative business, a co-working operation, a market, shops, gallery, event space, restaurants, a brewery, a foundry and artists’ workshops. 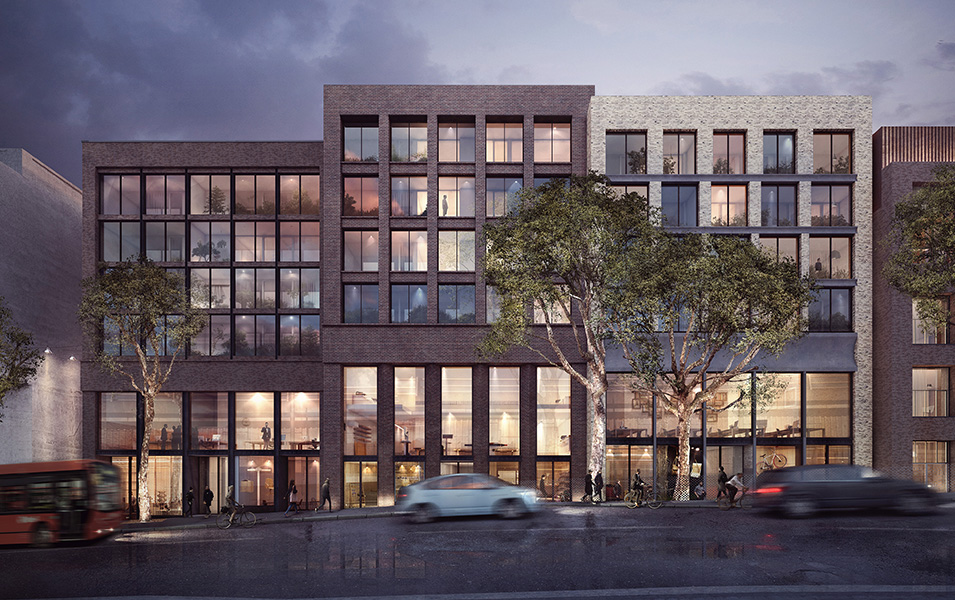 It is customary, in medium-density residential schemes, to design single, monolithic building types that occupy an entire city block, but here we are making up streetscapes with individual buildings that are distinct from each other.

Inside they may be identical, but we can adjust floor heights, moderate window openings, syncopate rooflines to make the buildings subtly different from each other.

It is the antithesis to the insensitive, block-scaled developments which often blight London’s regeneration. 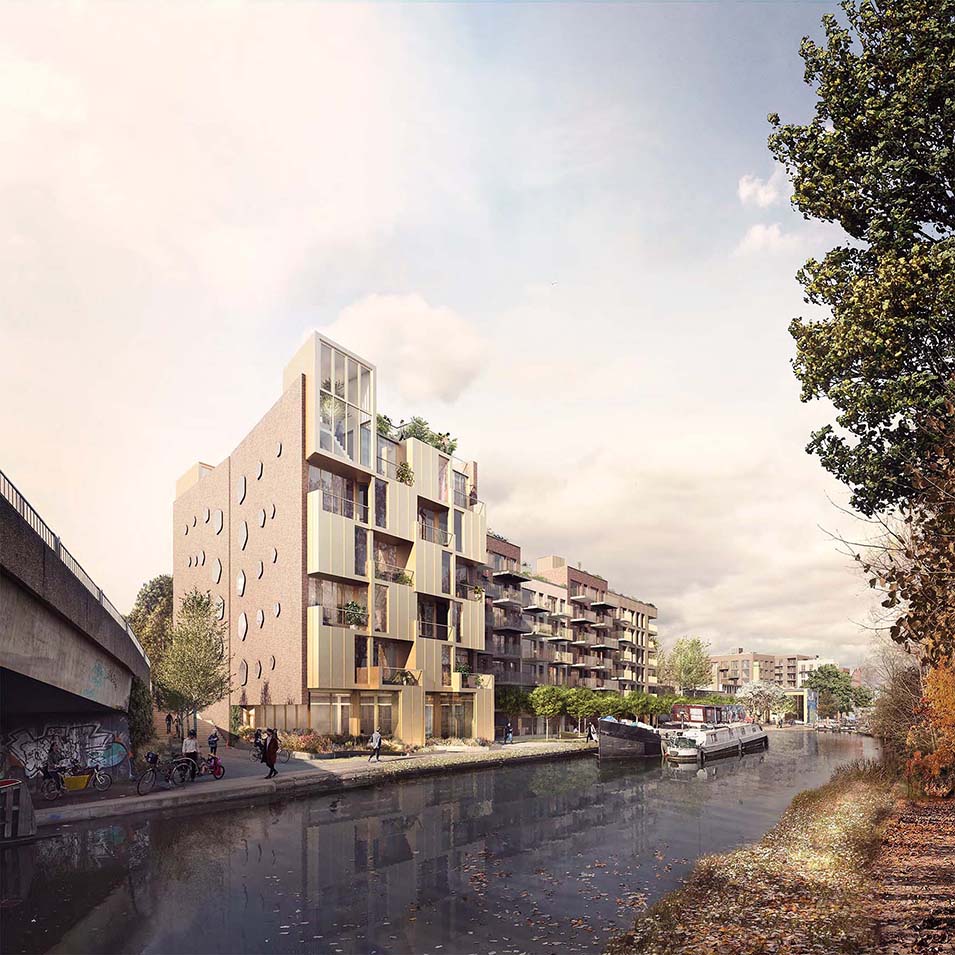 Awarding the project Overall Winner at the 2017 New London Architecture Awards, jury member Riccardo Marini said, “It’s a proper piece of city,” and fellow juror Steve Kennard commented, “What is interesting about this project is that it mirrors what London did well in the past.” 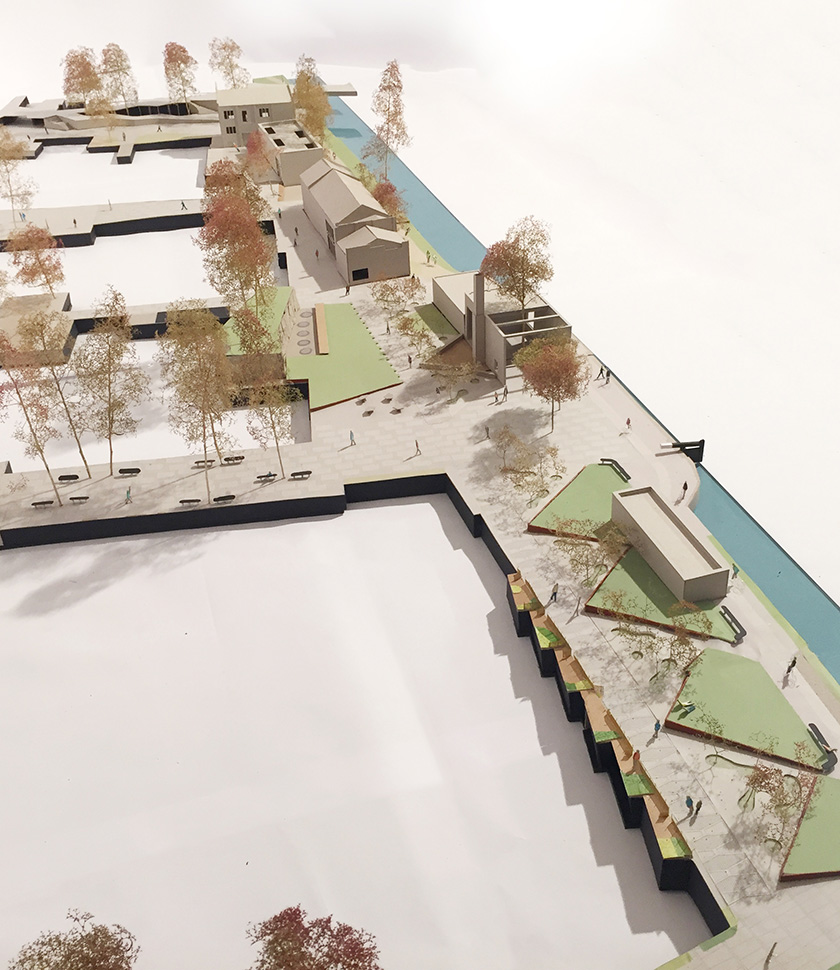 The linear park along the canalside makes a seamless connection with the existing towpath. Existing buildings become park pavilions: a café, a restaurant and an art gallery.

Read more about the thinking behind this project:
#placemaking
#homes
#reuseandheritage
#greenculture 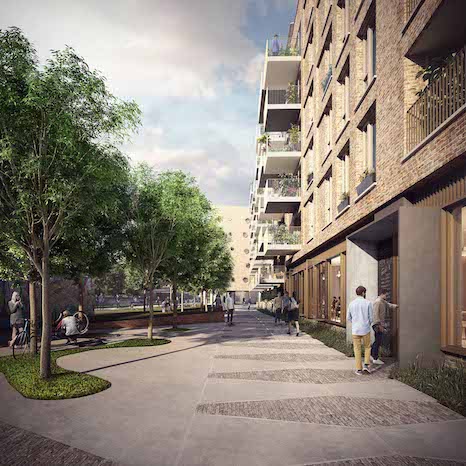 The promenade running through the canalside park is paved with an alternation of large format concrete pavers and small format brick. 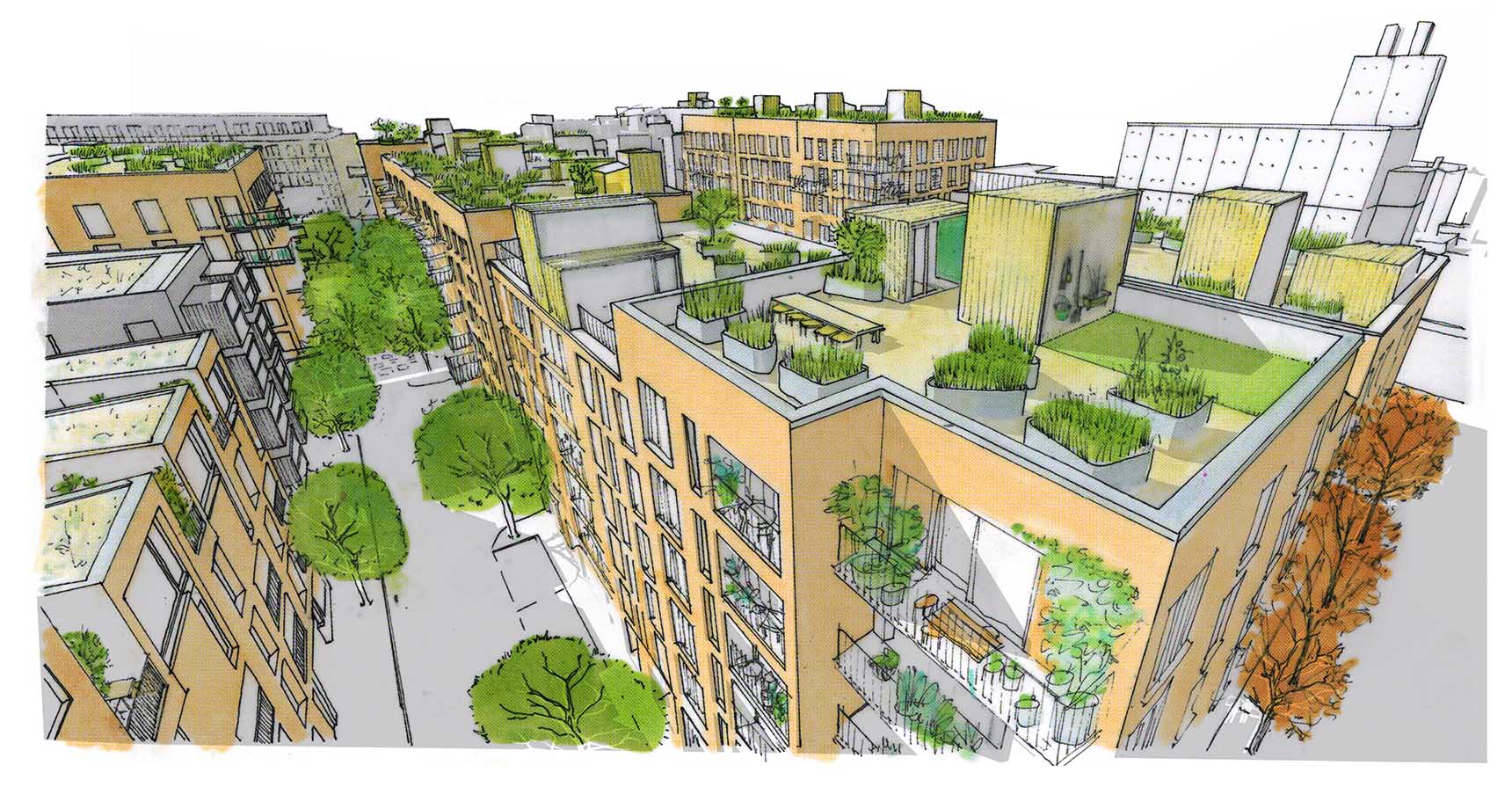 Every residential building has a rooftop garden for use by residents and visitors, with places to sit and eat, places to grow things and places for children's play. 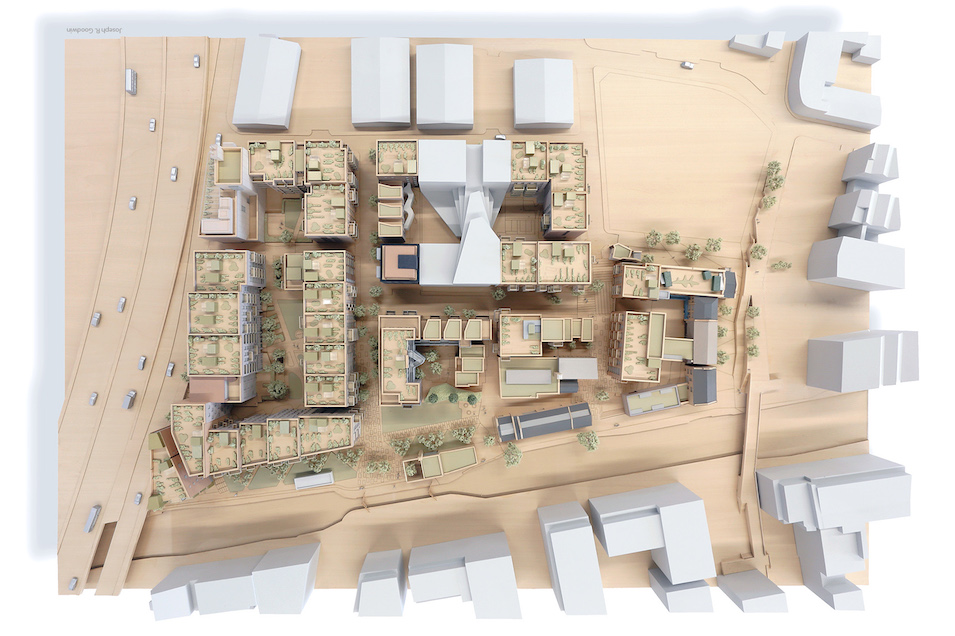 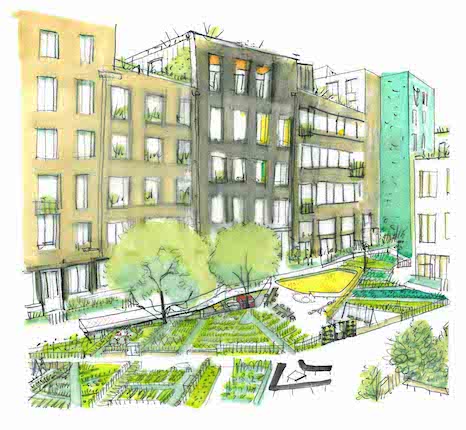 Landscape study for one of the residential courtyards. Trees planted in the car park under grow through vent slots to green both car park and courtyard. 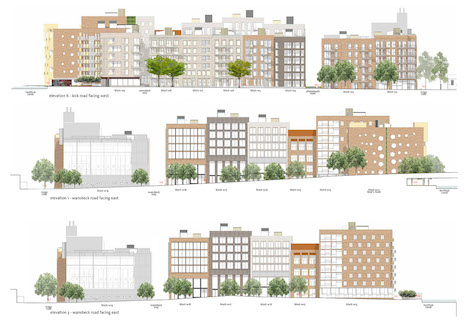 Composite elevations of parts of the project show how each urban block is made up of individually designed buildings.