Working with Igloo Regeneration, Ash Sakula has created a new neighbourhood of seventy-six homes on the site of the former Malings Pottery in Newcastle.

Located on the bank of the River Ouseburn, in a steep-sided, ex-industrial valley, The Malings is designed to nurture a genuine sense of cohesion and engagement among the inhabitants.

The project was declared Supreme Winner at the 2016 Housing Design Awards, and in 2019 the project was acclaimed by the "Building Better, Building Beautiful" Commission as an example of beauty in British housing design.

The architectural critic Rowan Moore described the scheme as embodying “... the spirit of Tyneside compressed into a sociable, varied, intriguing new neighbourhood. It is a masterclass in quiet invention, style and sustainable living. If its lessons are followed by Newcastle, Gateshead and other British cities, its influence could be profound.” The Observer, 1 November 2015 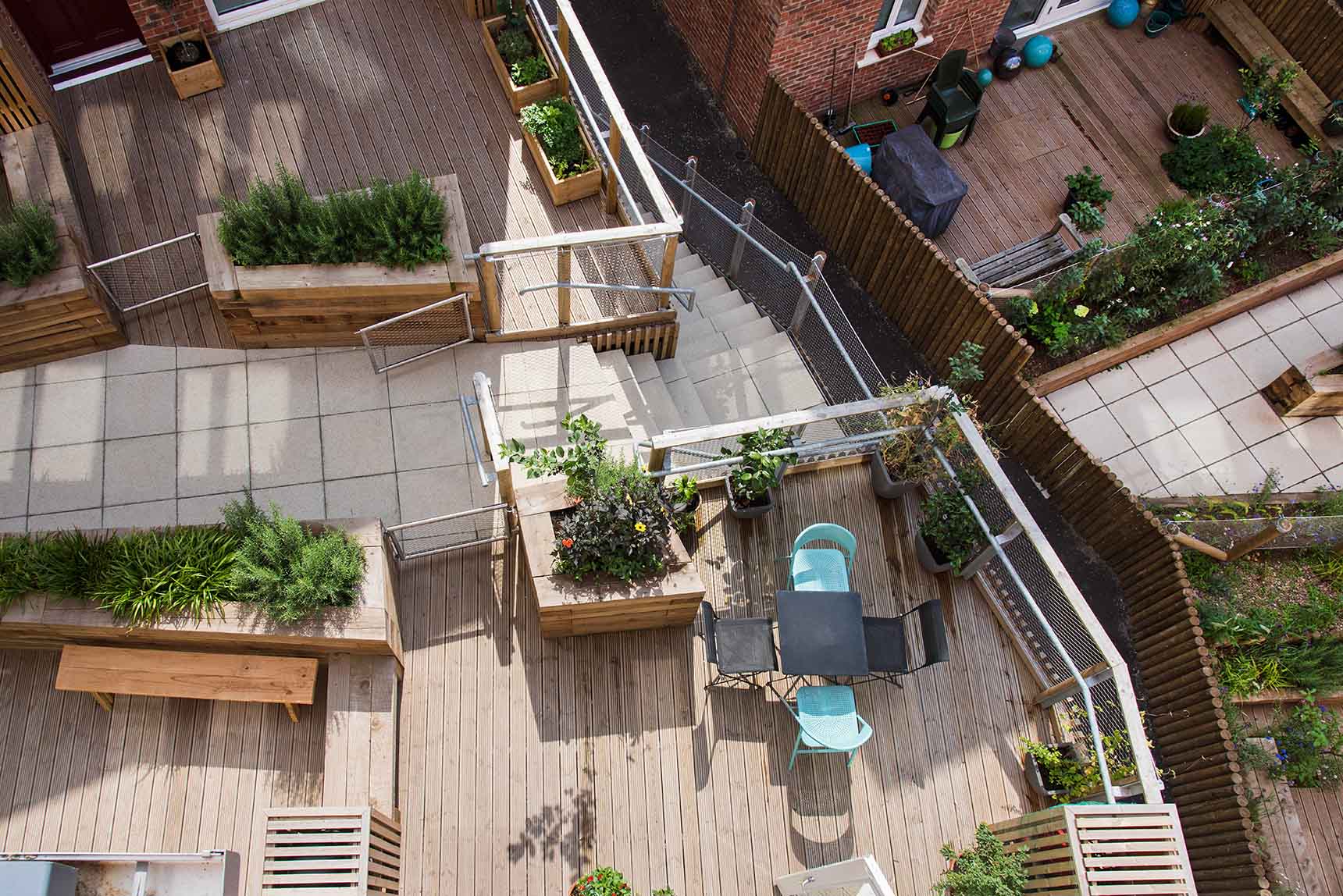 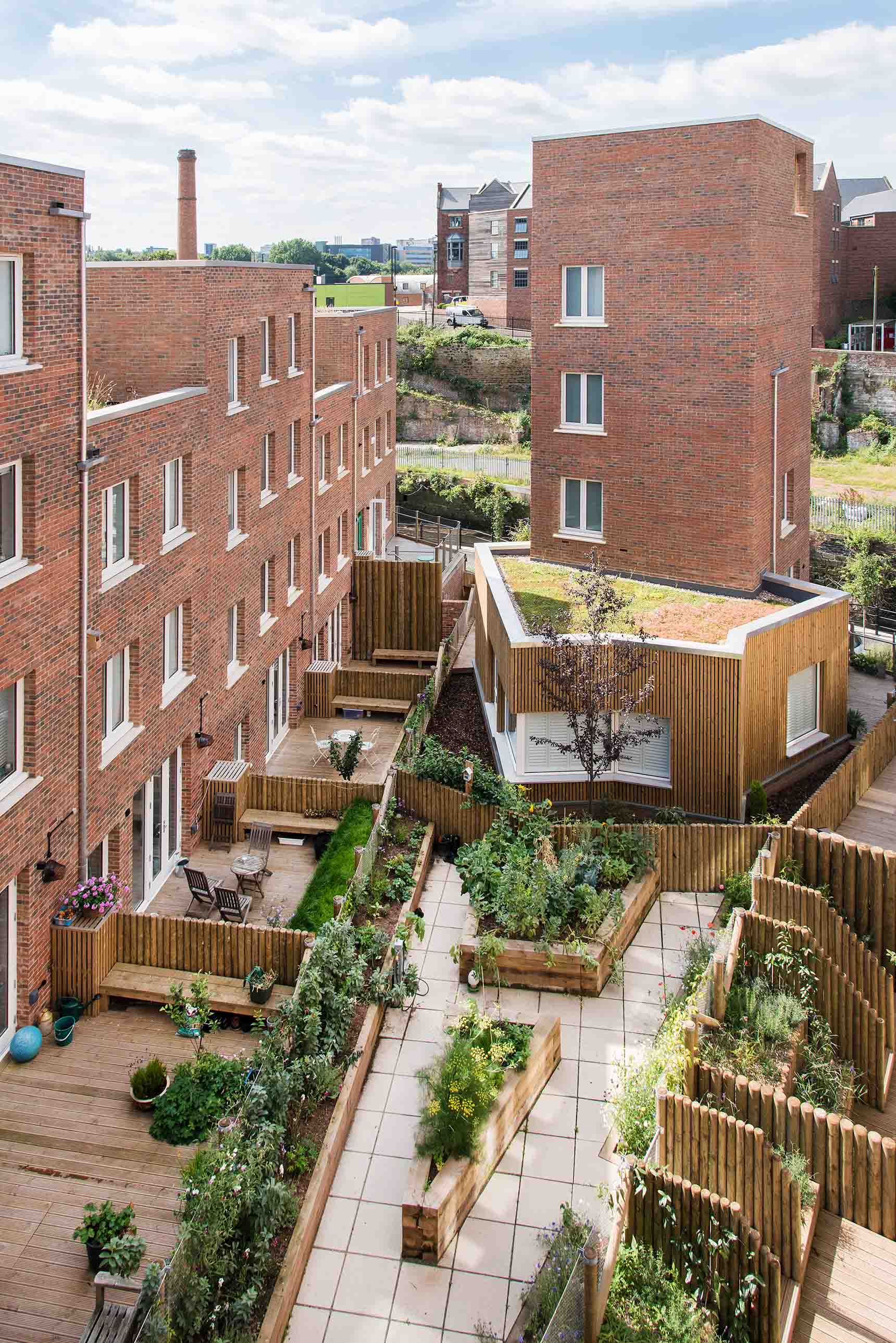 Ash Sakula has been engaged with the future of the Ouseburn Valley for ten years, combining hundreds of conversations in pubs, streets and homes - “loitering with intent” - with formal consultation and collaboration.

The design of The Malings grew out of understanding what was happening there in combination with a radical approach to place-making and housing design.

Our new streets run down the contours of the valley towards the river, rather than across the slope, following desire lines to connect into surrounding neighbourhoods.

Avoiding the expected apartment block typologies, we shaped a neighbourhood of houses and streets forming sequences of spaces of varying character.

Its simple, syncopated architecture of brick walls and windows has hidden subtleties, curving with the landscape and avoiding straight repetition. 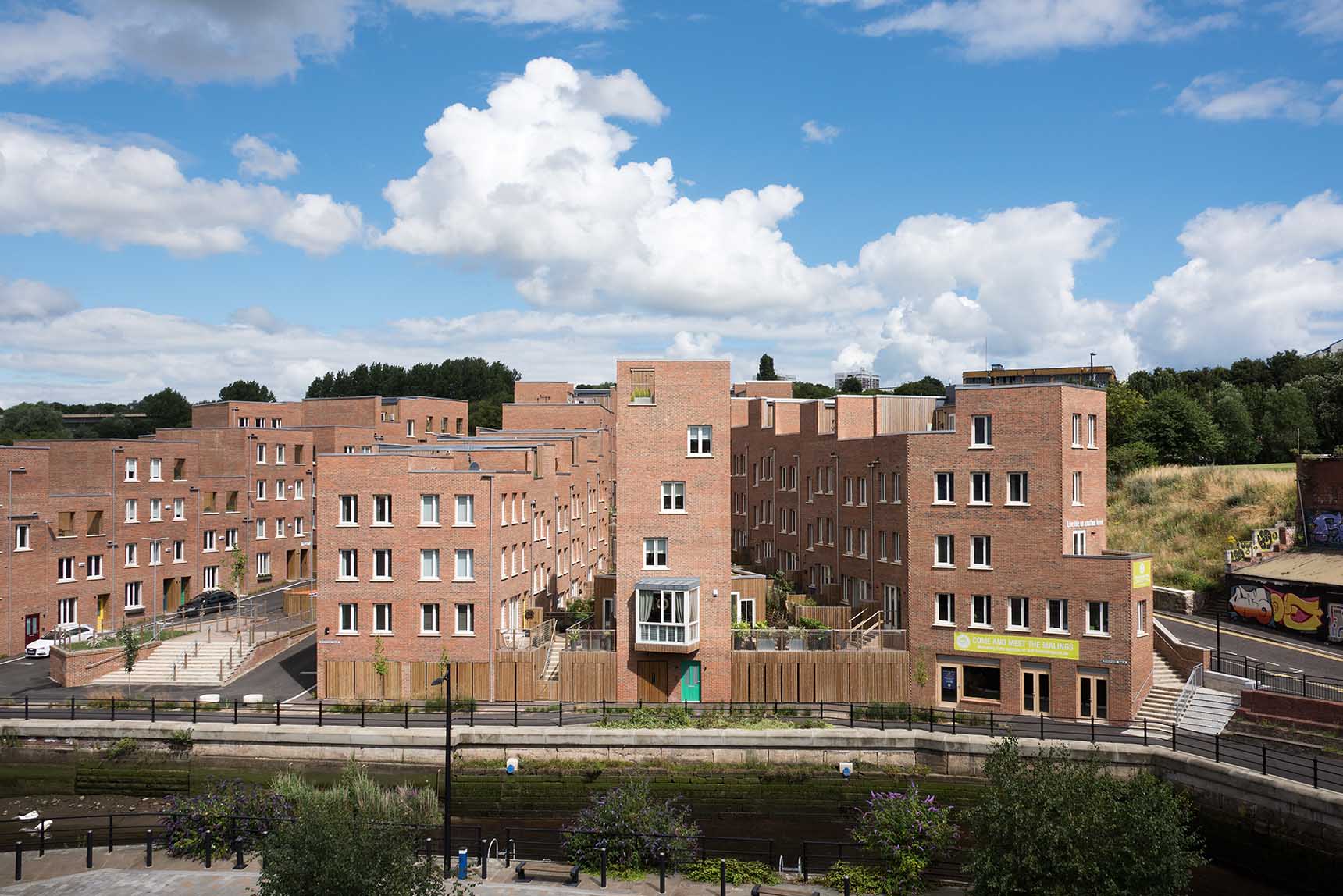 We also developed a variant of the local Tyneside Flat in the form of stacked duplexes. No two homes are identical and every home has its own front door onto the street, as well as either a small garden or a large roof terrace.

A genuine sense of cohesion and engagement has been nurtured by Ash Sakula’s characteristically convivial approach to outdoor and communal spaces, which treats cycle stores and recycling areas as opportunities to promote informal encounters between people and promotes shared resources such as communal allotments.

A successful addition to the scheme is a craftsman-made feasting table where residents hold diverse parties and events. 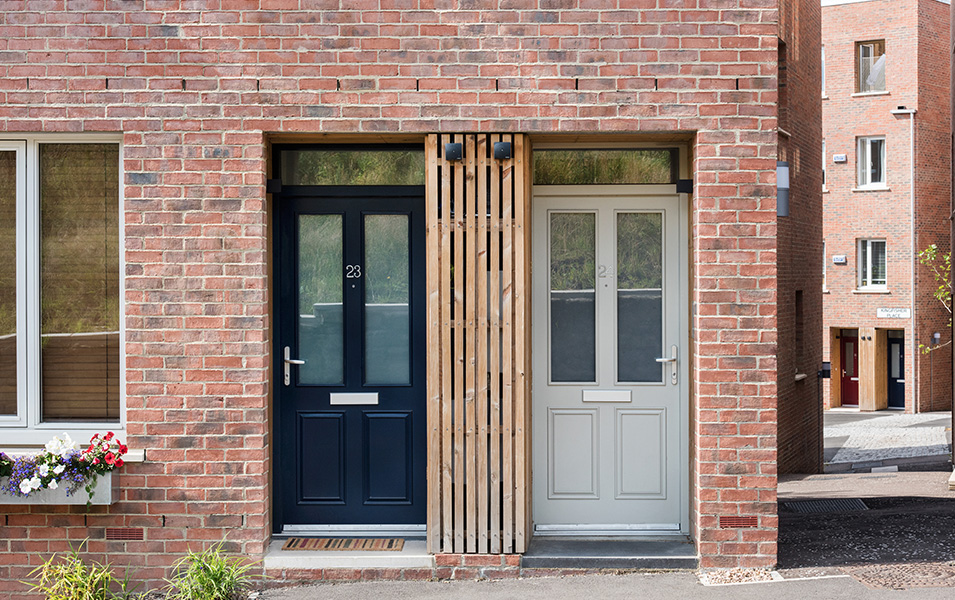 Street frontages alternate between three and four storeys. The three storey parts, with one front door, contain a single dwelling. The four storey elements, with two front doors, house stacked duplexes, each with its own front door.

There are no lifts, corridors or common stairs. Net to gross is 100%, reducing build costs and meaning lower service charges for residents. 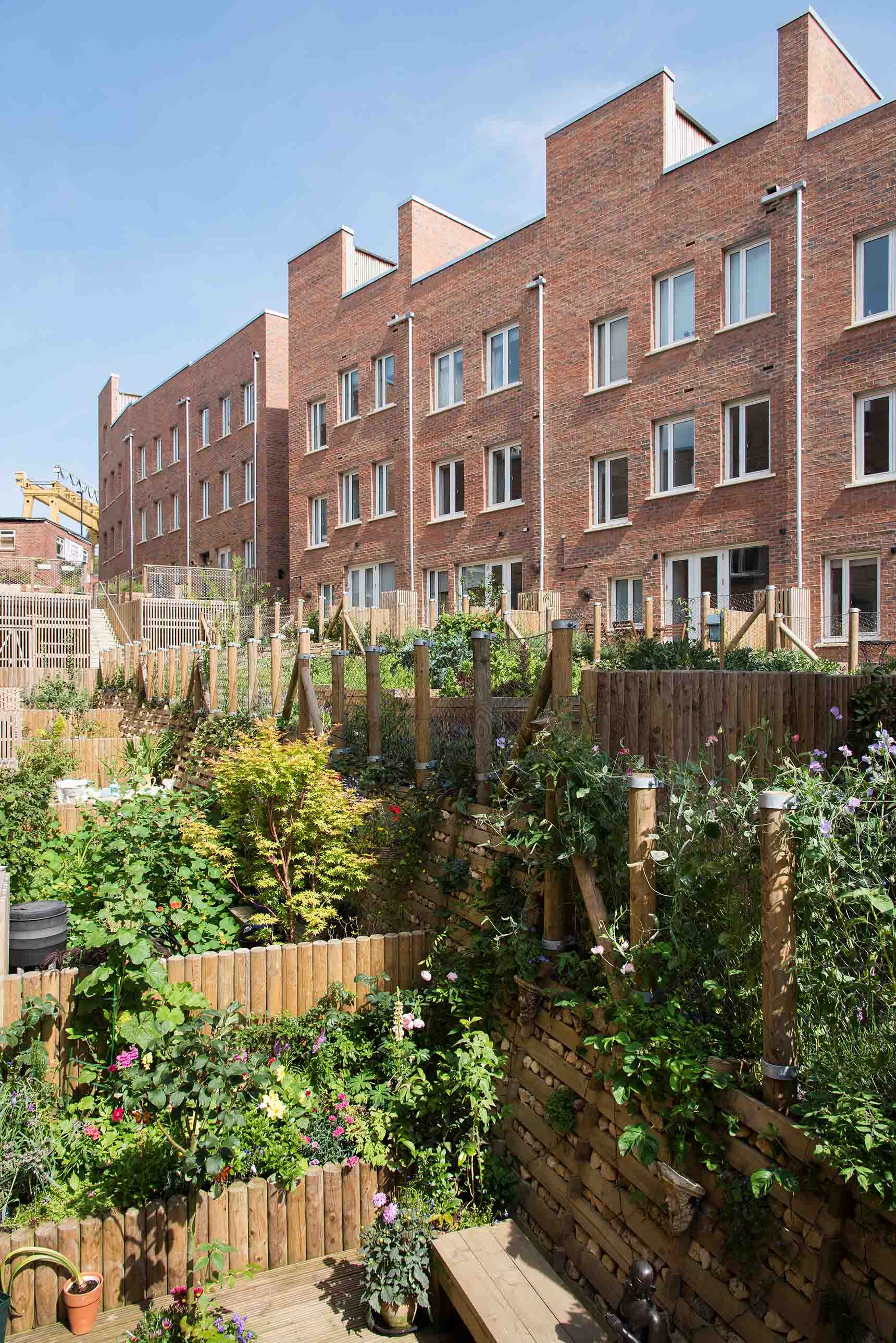 Back gardens and shared garden plots are terraced across the steep slopes of the site. 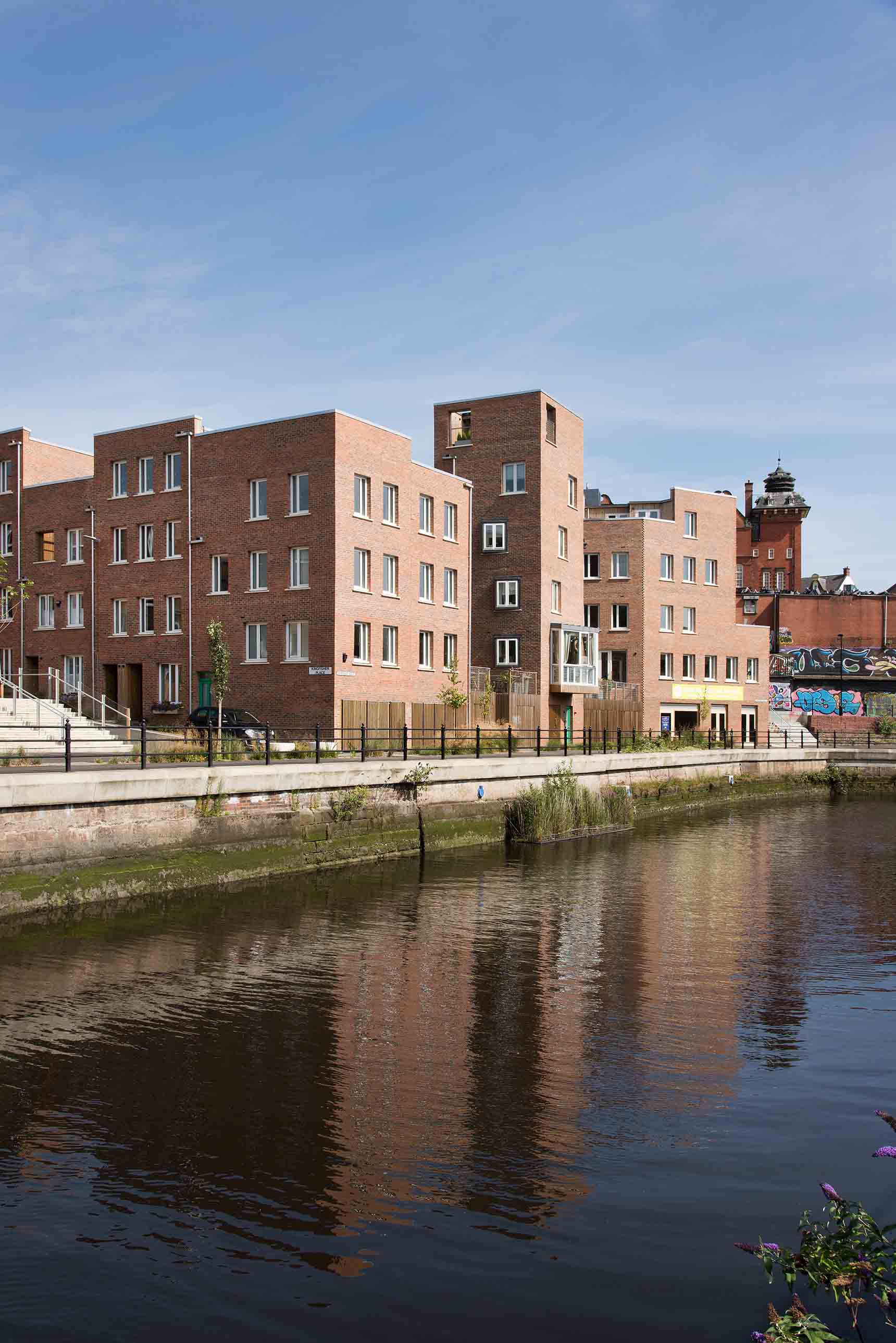 The scheme we devised increased the number of units on site beyond the original requirement. Its design has delivered a commercial uplift: all homes sold at prices higher than anticipated.

Its unusual design typologies, with no common parts, reduced both build cost and service charges.

It has attracted a particularly lively, diverse and creative-minded community of residents who readily engage in the thriving residents’ association and contribute creatively to the cultural invigoration of the area.

The Malings has kickstarted the regeneration of the Ouseburn Valley. Since its completion a thriving combined pottery/café and a microbrewery/beer garden have opened. Neighbouring sites are being developed with additional new homes. 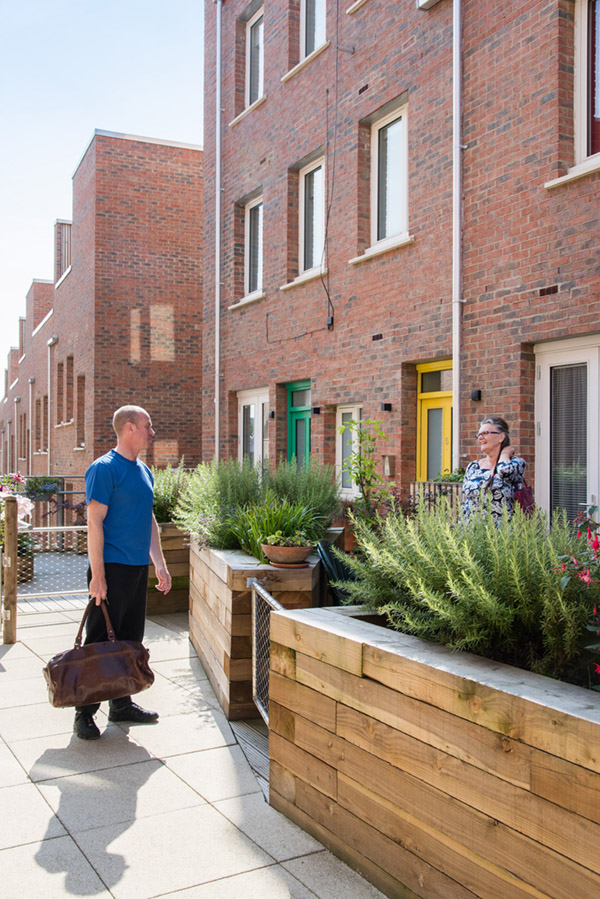 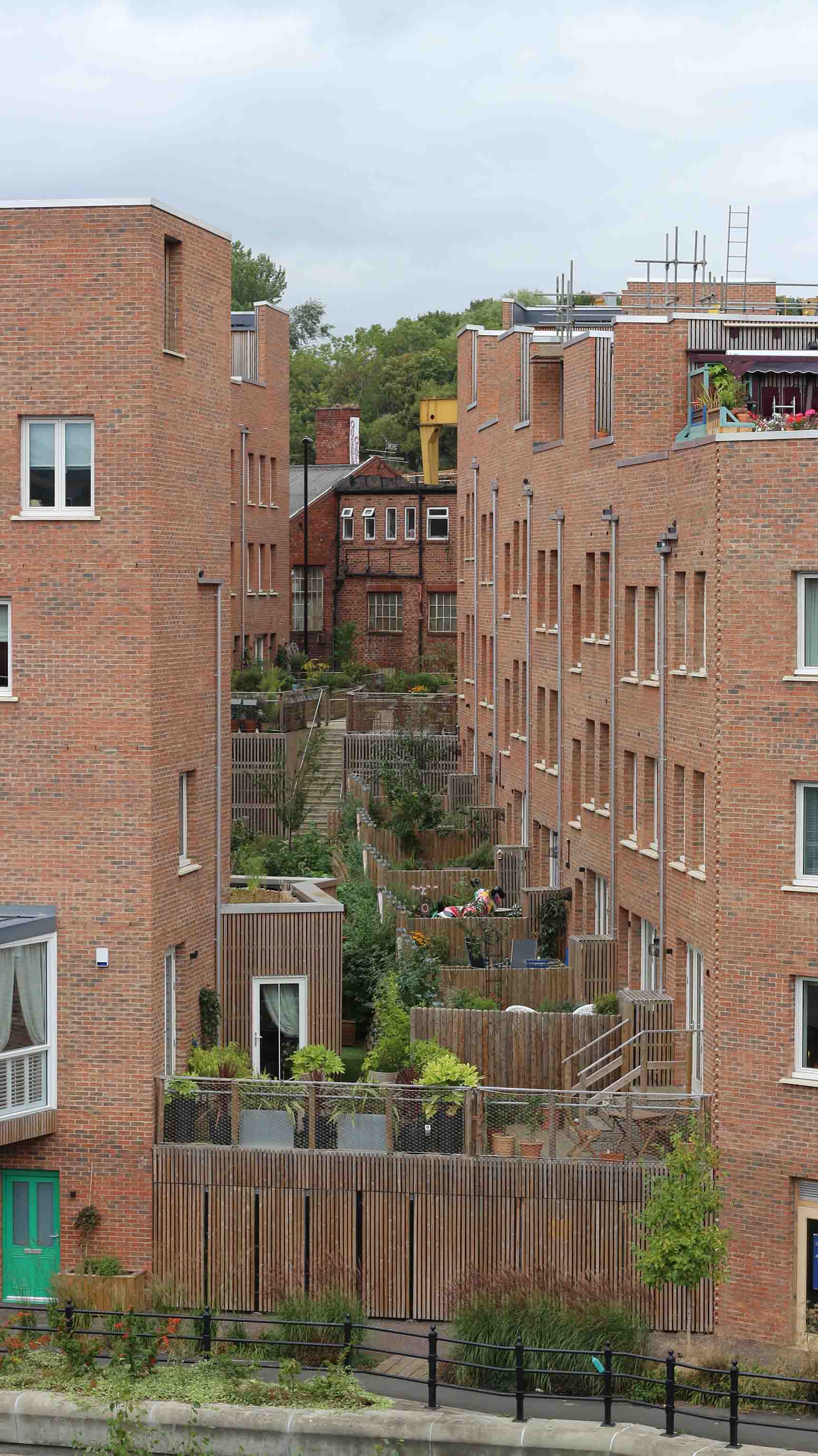 Back gardens step up the steep Ouseburn valley. Separation distances are kept to a minimum, while privacy and overlooking issues are carefully considered. 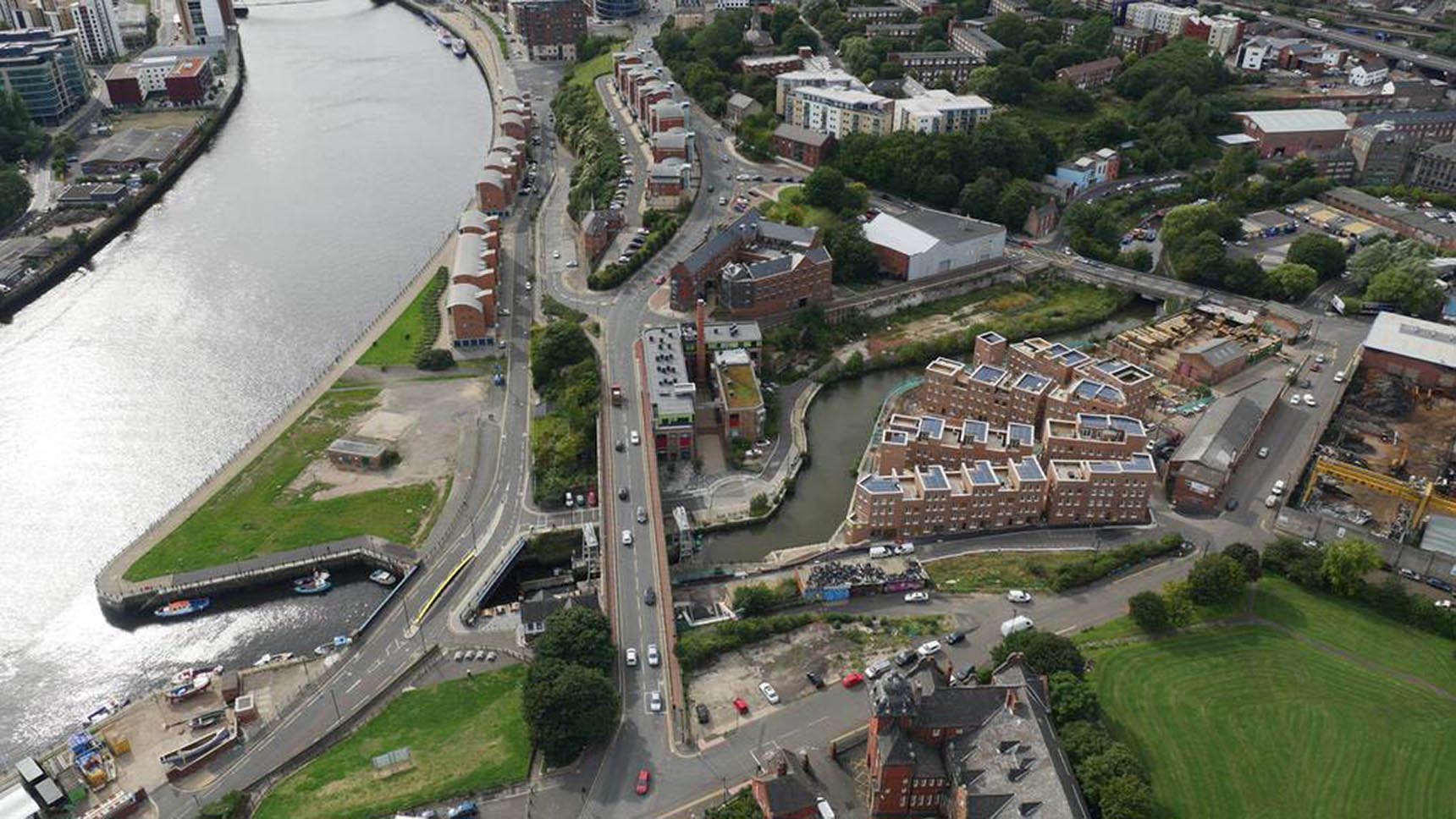 Aerial view showing The Malings in the context of the Ouseburn Valley and the River Tyne, left. 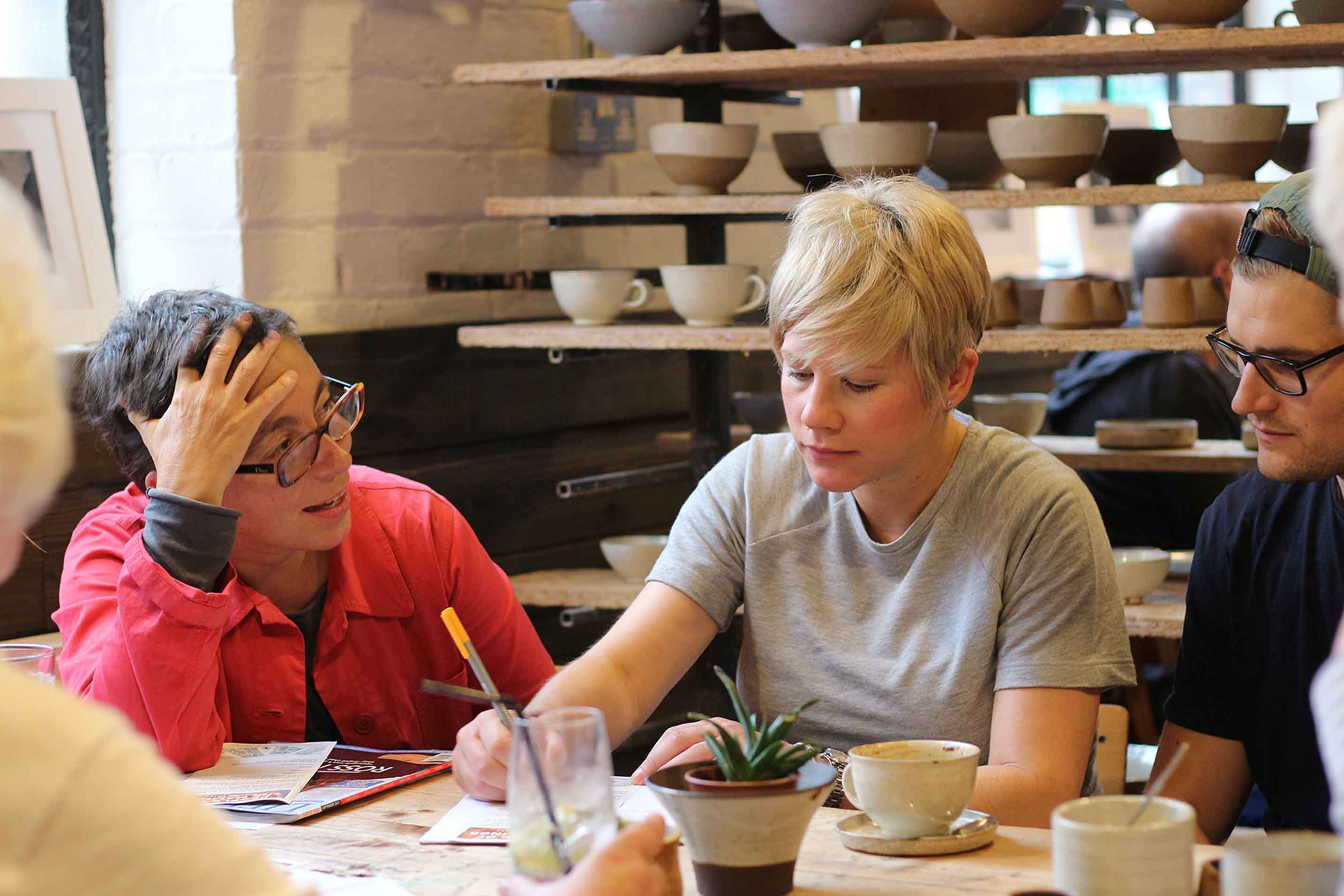 You can learn about the community of The Malings at our post-completion project site. 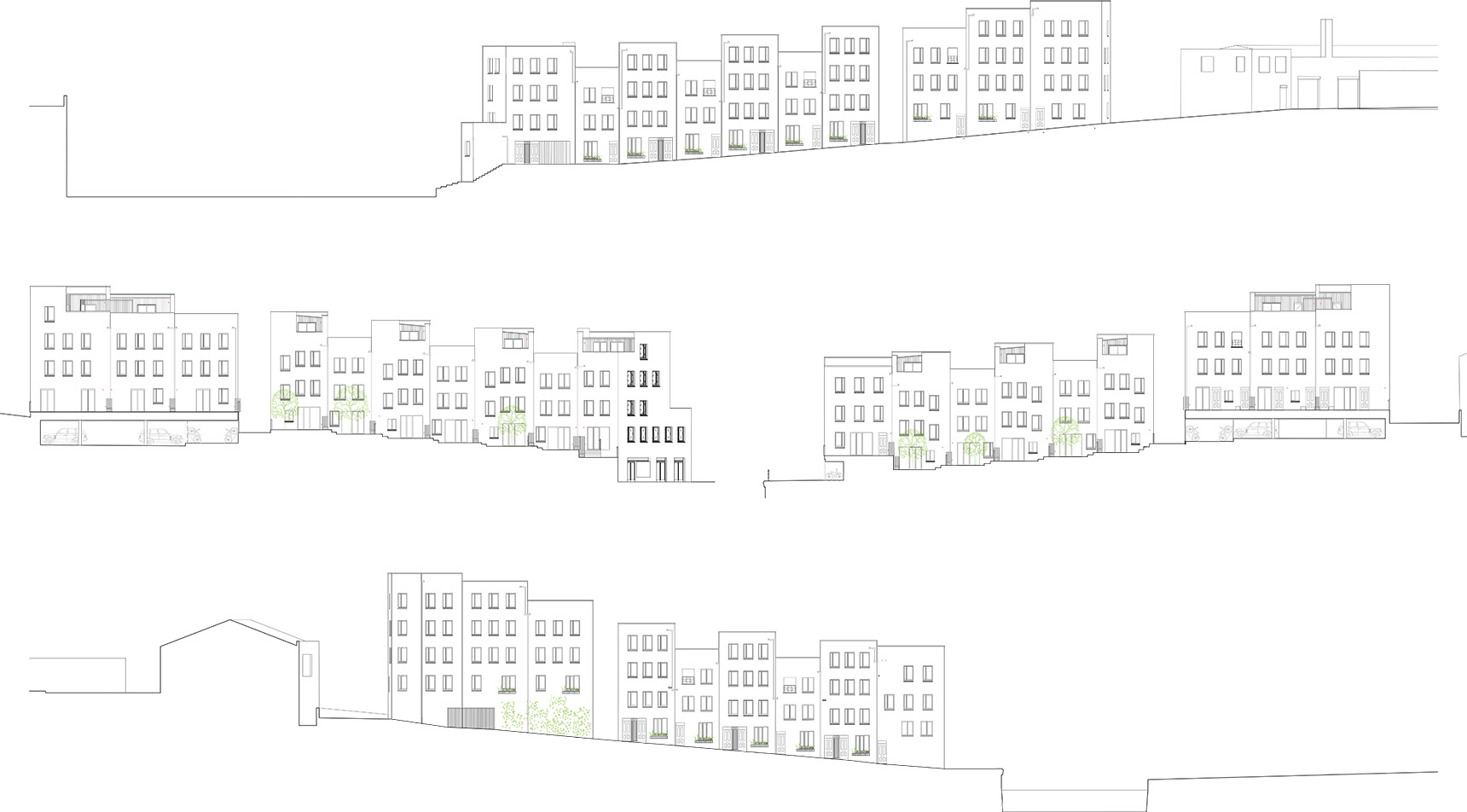 A simple, syncopated architecture of locally-sourced brick walls and timber windows has hidden subtleties, curving with the landscape and avoiding repetition. 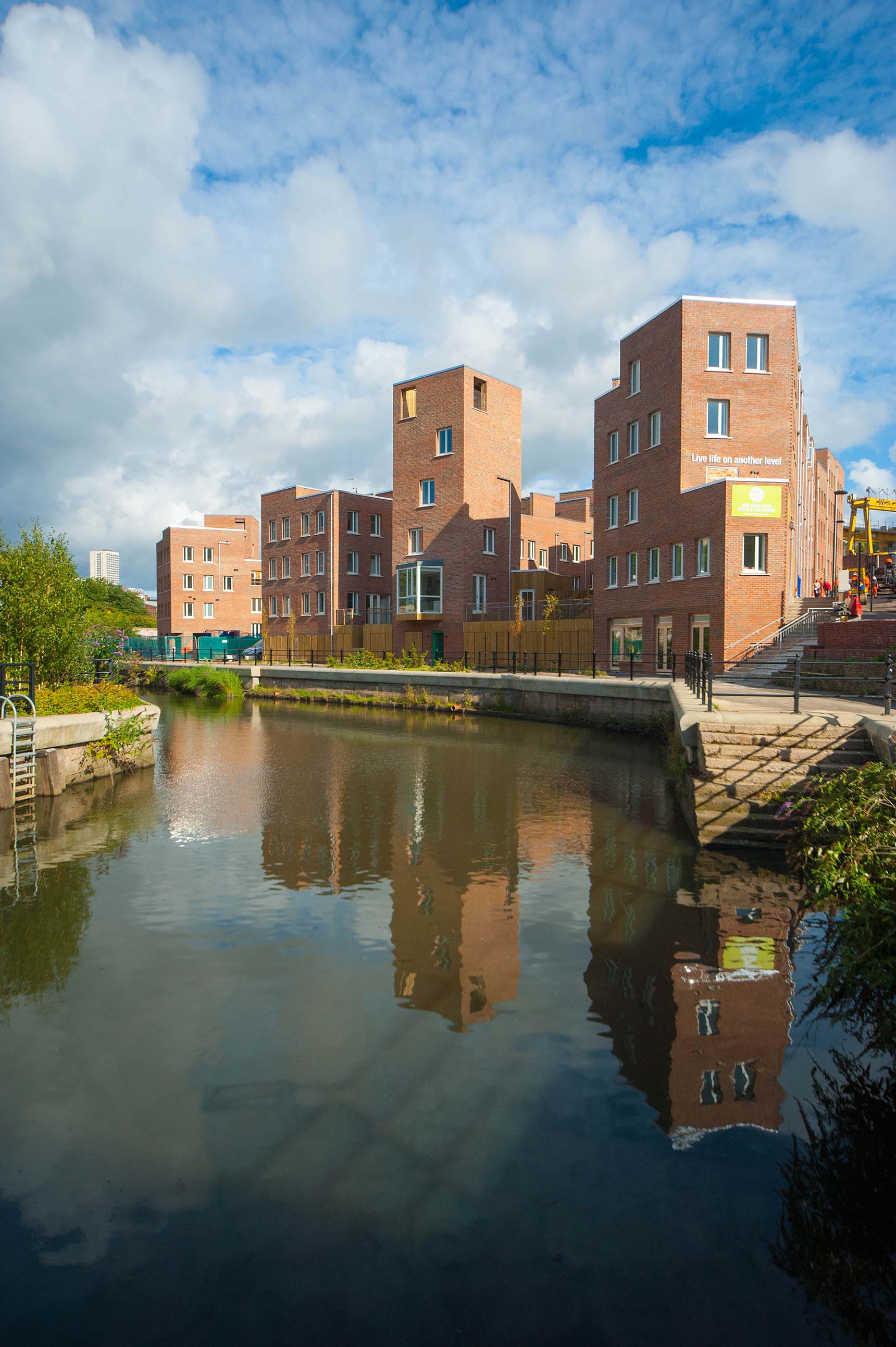