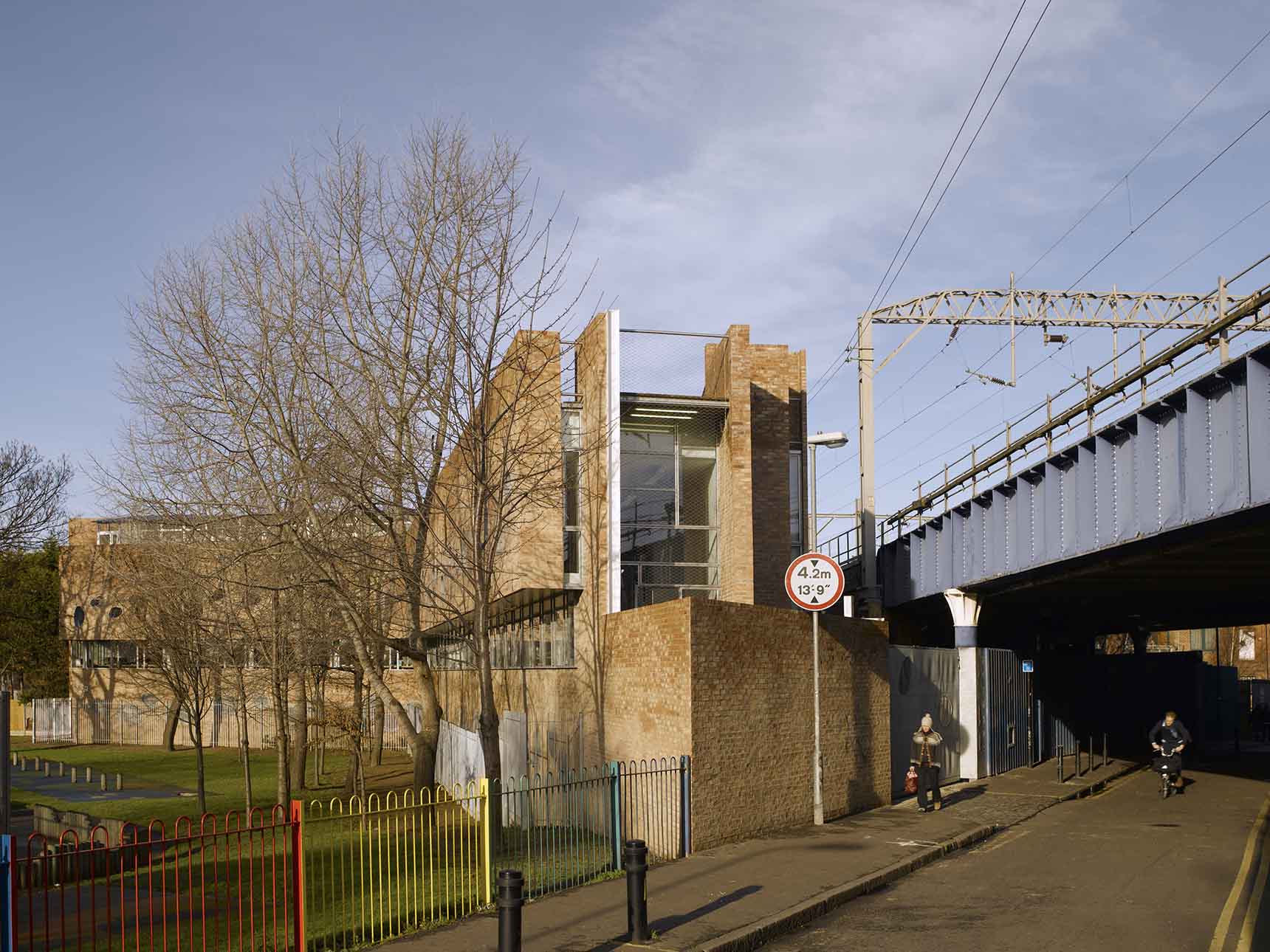 Ash Sakula squeezed this cluster of studios, workshops, and offices into a unusually narrow, inaccessible site, sandwiched between the parkland of London Fields and the brick-arched mainline railway out of Liverpool Street.

Transforming an awkward piece of brownfield land into a vibrant new creative cluster, the building was the result of a competition to make a new headquarters for the Free Form Arts Trust, a network of arts practitioners, landscape designers and architects.

Its name, Hothouse, recollects the botanical glasshouses of Loddiges Nursery, which stood nearby in the 18th century.

2008 Hackney Design Award. Jury comment: “The building has beautiful and flexible working spaces, which are full of light and look out over the park. Although the materials are often inexpensive, they are used with joy and playfulness. This makes the building fun, and at times, really beautiful.” 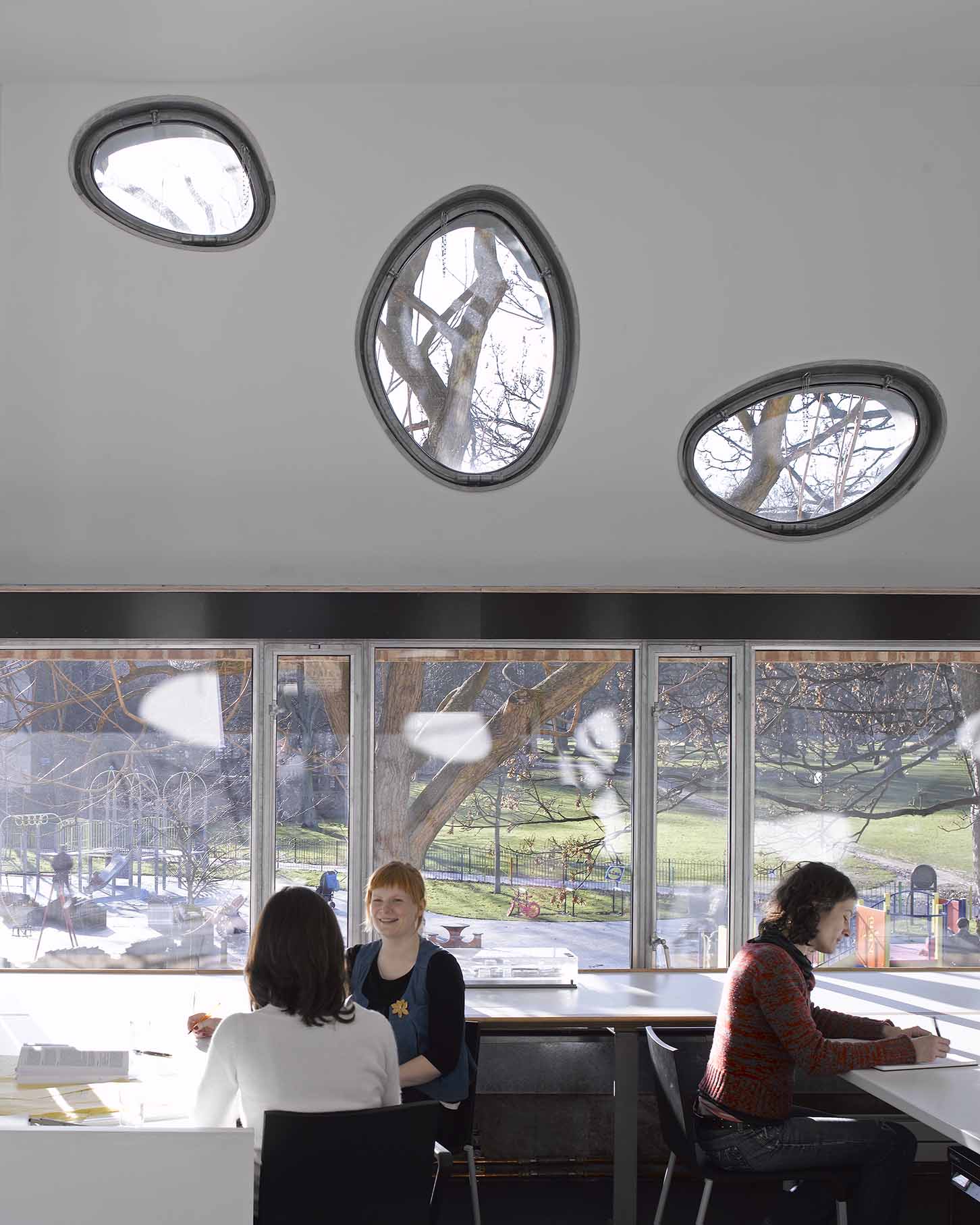 At the building’s opening, Benjamin Zephaniah proclaimed: "Hothouse! Long may you be hot, long may you be cool!" There was a shared understanding that we were designing to a set a of changing scenarios rather than making a paradigm for future working. This is what creative clusters are about: nurturing a shared vision and making things happen.

Although Free Form Arts Trust no longer operates, the building we created together continues to provide co-working space for small creative businesses and hosts a popular summer restaurant on its roof.

We like this evolution: we believe that the best way to achieve sustainability in construction is to make buildings that are clever enough and flexible enough and simple enough to outlive their initial transient uses over scores and perhaps hundreds of years.

Though of course we have aimed to make the Hothouse a green building right from the start, by using locally available  materials and skills; avoiding the export of fill from the site; making the building naturally ventilated and of massive construction to reduce heating loads in winter, and to avoid the need for cooling in summer; and locating a large array of photovoltaic solar cells on the roof. 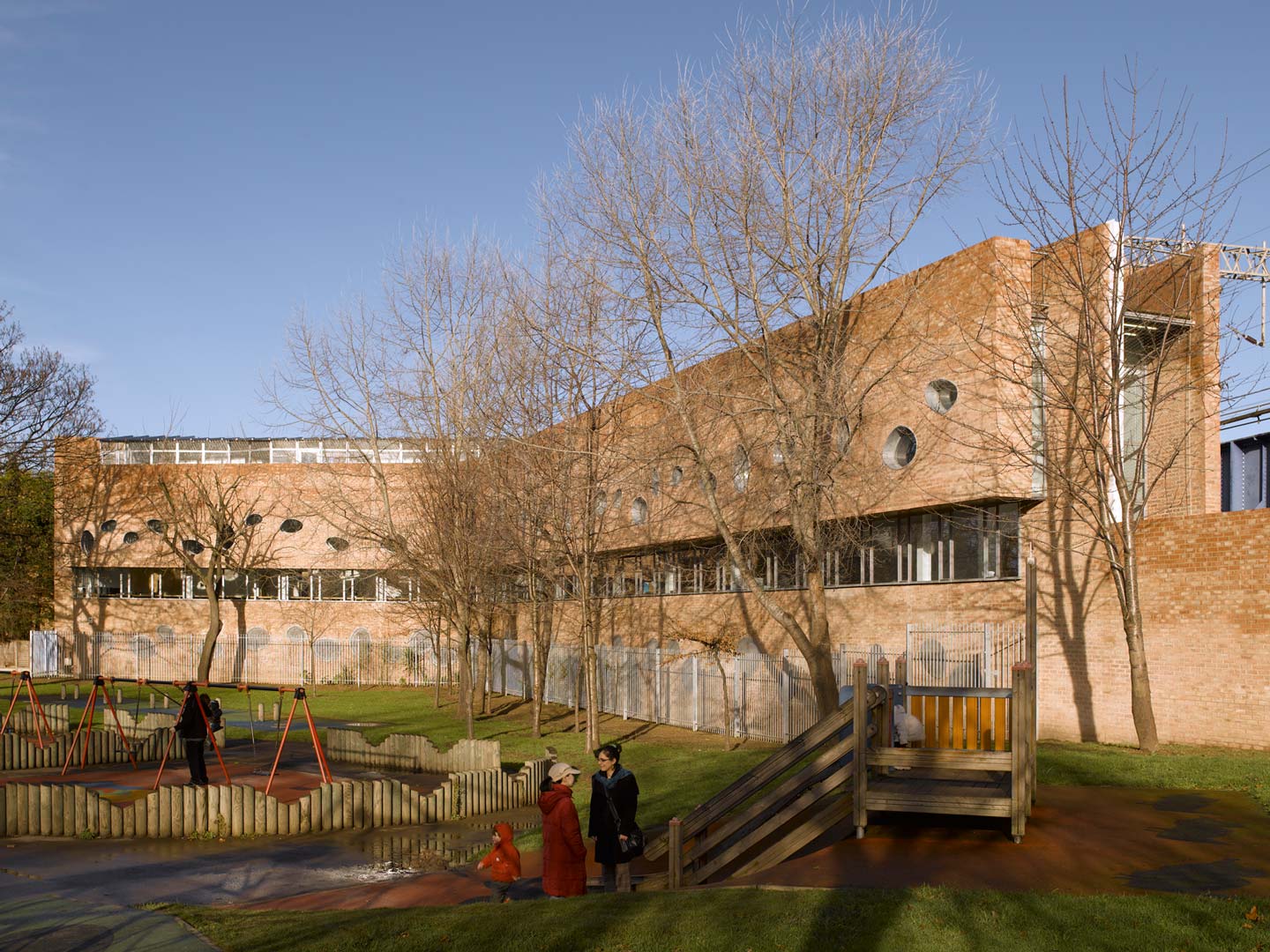 The site our clients had found was a mess. Long and narrow and dominated by a north-south railway viaduct with trains rattling over every few  minutes. In many ways an archetypal run down, derelict, contaminated, brownfield, inner-city site which no one else could see any virtue in. This fact was of course very useful to our clients because it meant the the site was cheap.

And the site did have two other excellent advantages. Firstly Free Form were able to get a long lease on the adjoining Railtack land including the spaces under the arches. Secondly the long south western boundary of the site looked out over the green and mature trees of London Fields.

It was a difficult site with complex boundaries: not an easy site to build on.

We enjoyed the challenge and imagined our response as a friendly giant with his limbs intertwined with the railway arches and his face turned towards the park. This personality evolved into a kinked, elongated building like a boomerang, with one arm parallel to the railway and the other angled along London Fields, where it forms itself into a secure edge-boundary against the park. 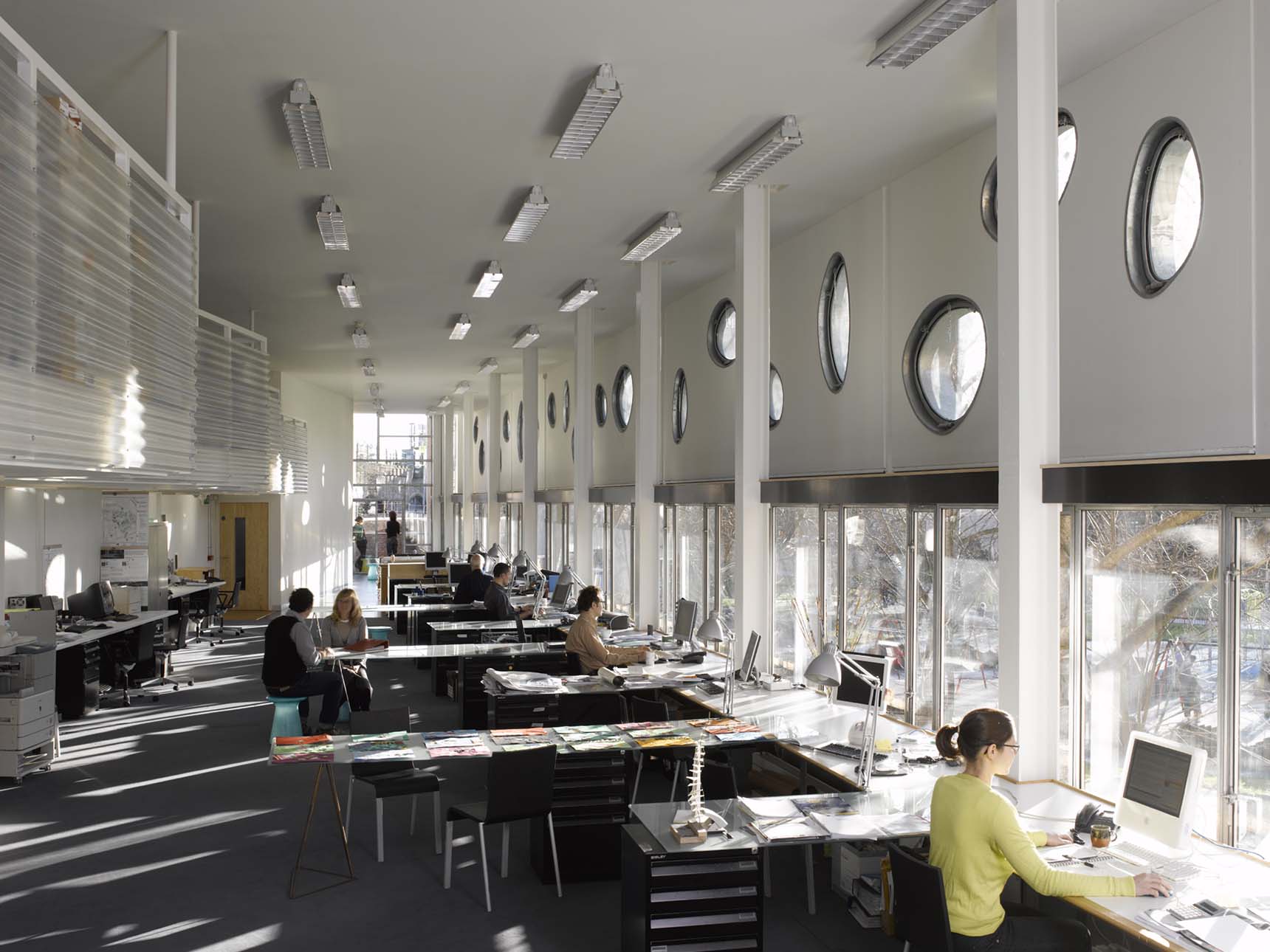 By organising the site as a campus around an open courtyard, we created reasons for people to cross paths and meet. The roof, which we conceived of as a ‘fifth façade’, is colonised by little studios and temporary performances and events. Visible to the thousands of commuters who see the building from passing trains, these curious structures suggest a sense of the creative activity within the building.

We formed studio spaces in the brick-arched spaces underneath the railway and configured the main studio, the Big Room, running the length of the building, overlooking the park.

There was a shared understanding that we were designing to a set a of changing scenarios rather than making a fixed paradigm for future working, this being an essential method for imagining survival for small arts organisations.

Certain original concepts and corners which made people excited by the project were fiercely defended through the rough and tumble of regulation and design development.

That in part is what creative clusters are about: nurturing a shared vision and making things happen. 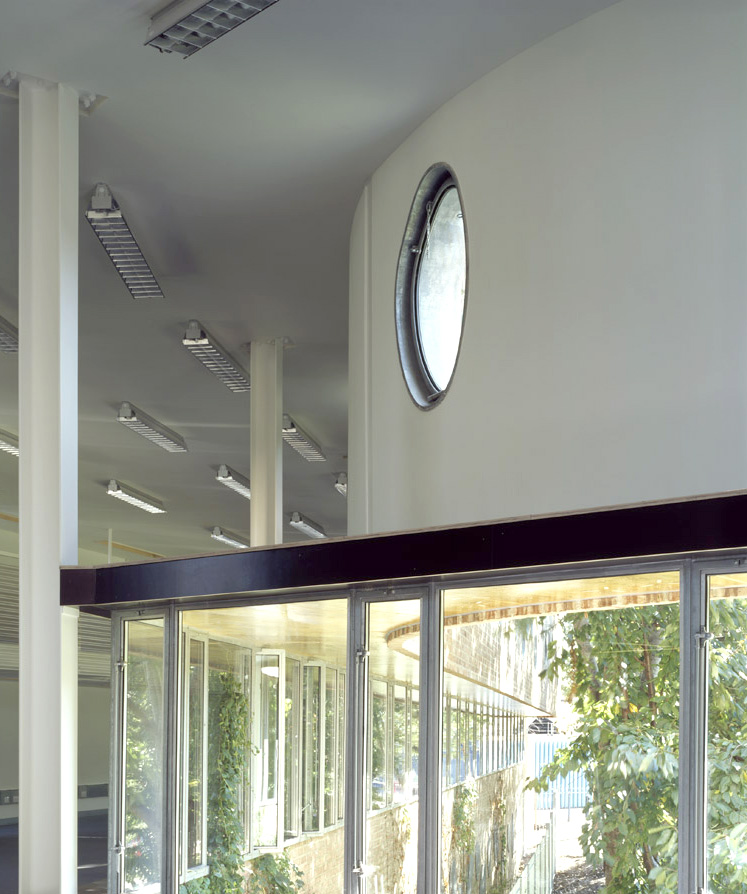 The continuous lower window gives a panoramic view of the park. It is shaded by an overhang, above which are so-called amoeba windows which send intriguing beams of sunlight across the studio. 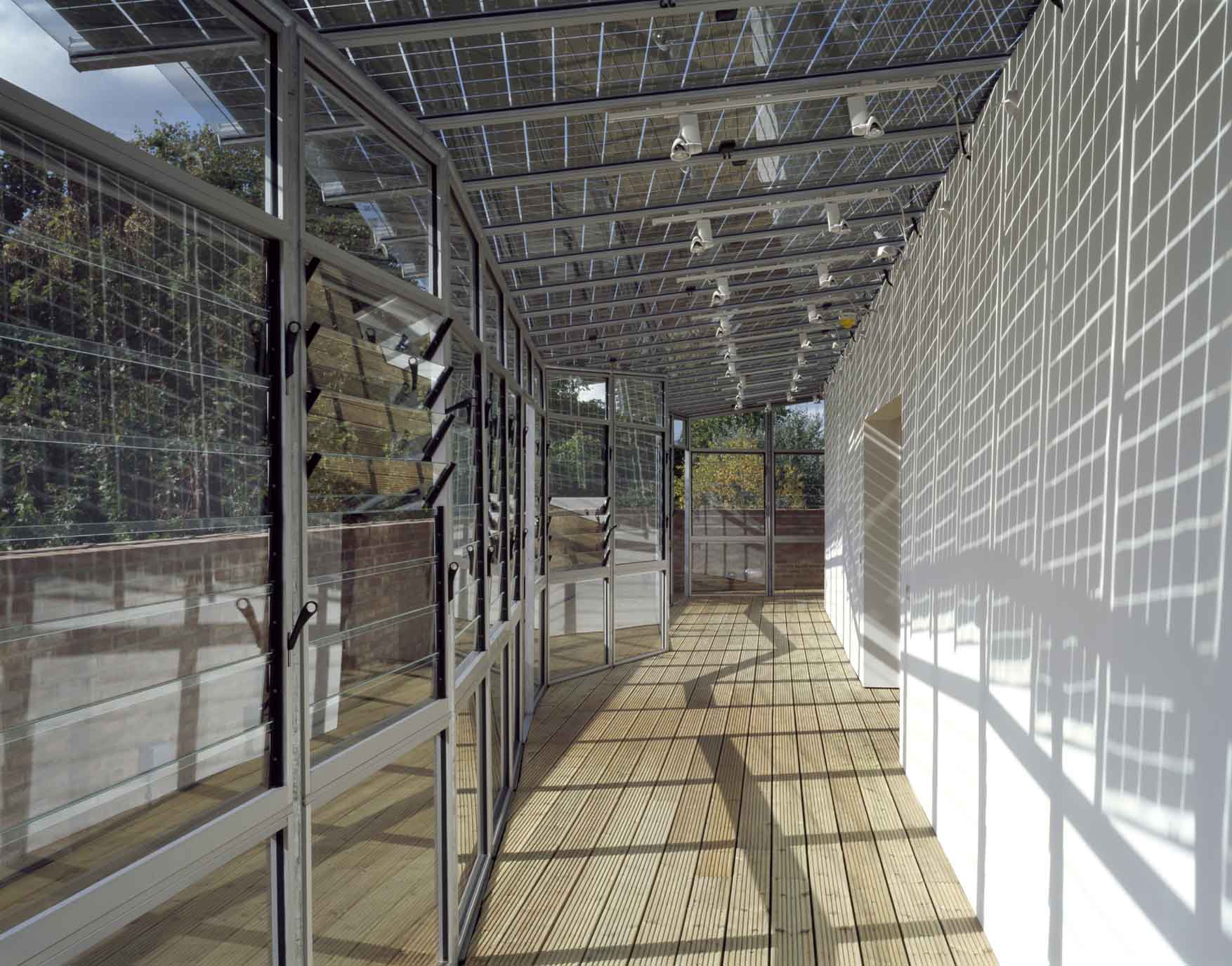 On the roof an inside-outside glazed gallery links the rooftop studios, with a communal teapoint halfway along. Photovoltaic cells are embedded into the roof glazing providing useful electricity for the building's services. 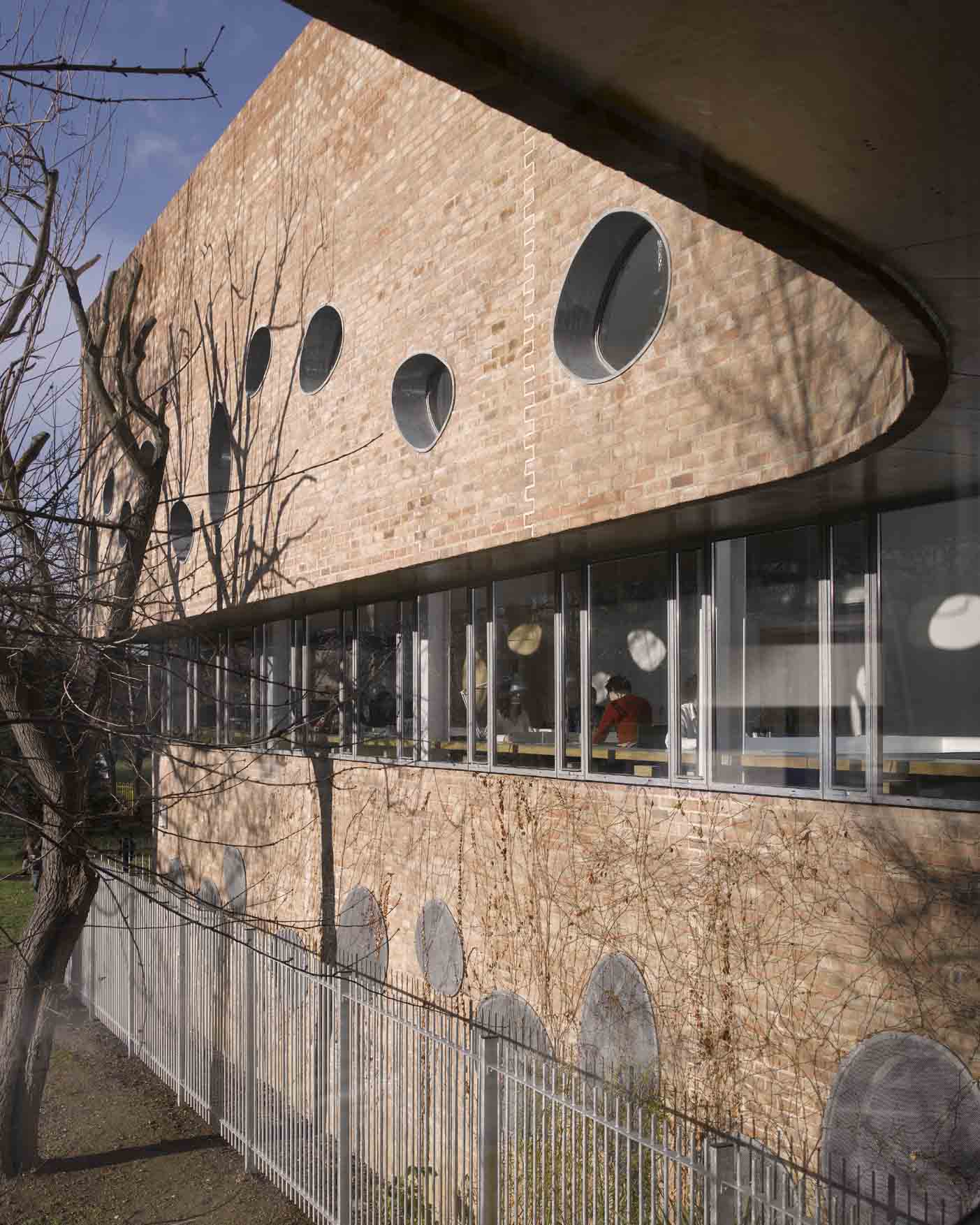 The Big Room, a double height space behid a continuous strip window overlooking London Fields, is a co-working space for many different firms and start-ups. 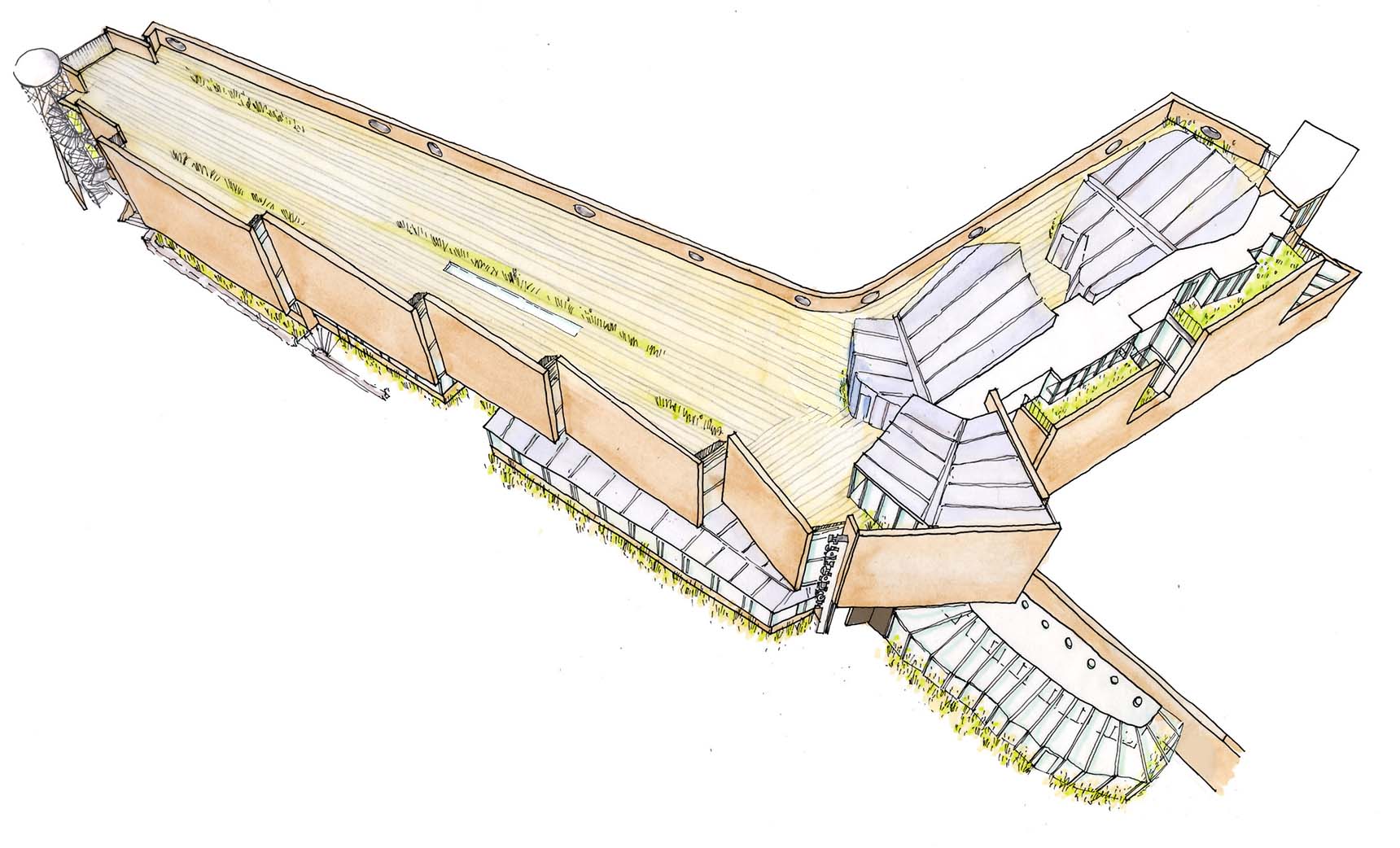 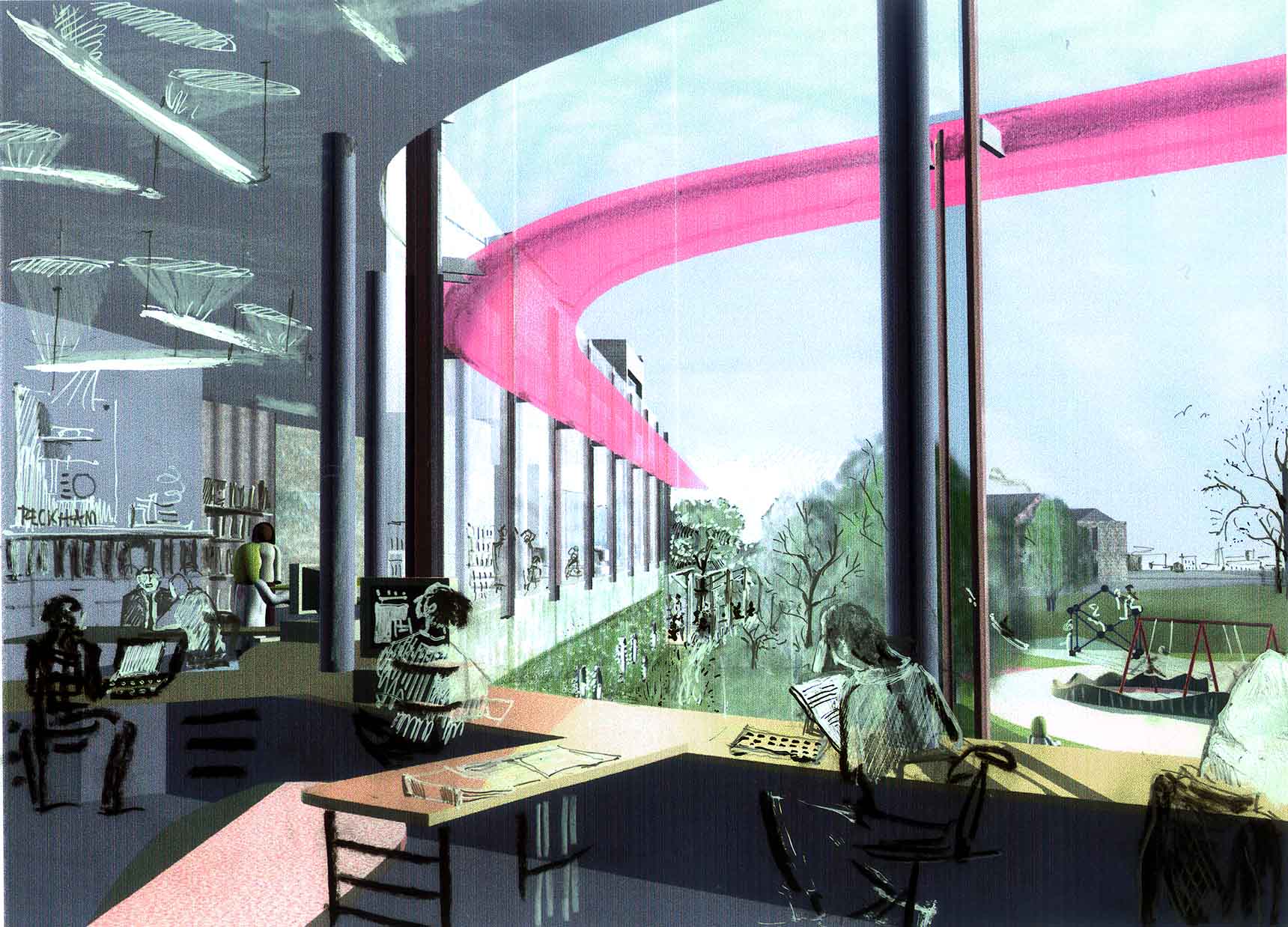 Early sketch: the Big Room looking out over London Fields to the distant London skyline.

Read more about the thinking behind this project:
#artscluster
#placemaking
#conviviality
#creativecoworking
#tactility 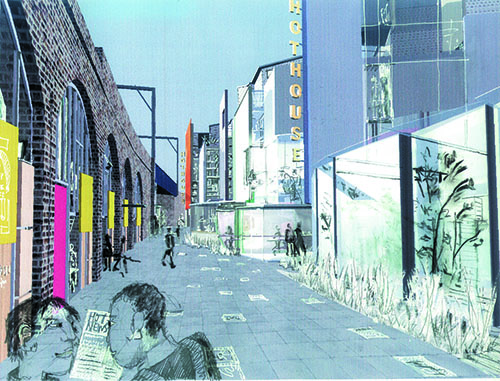 Early sketch: the working yard between the new building and the railway arch workshops and studios. 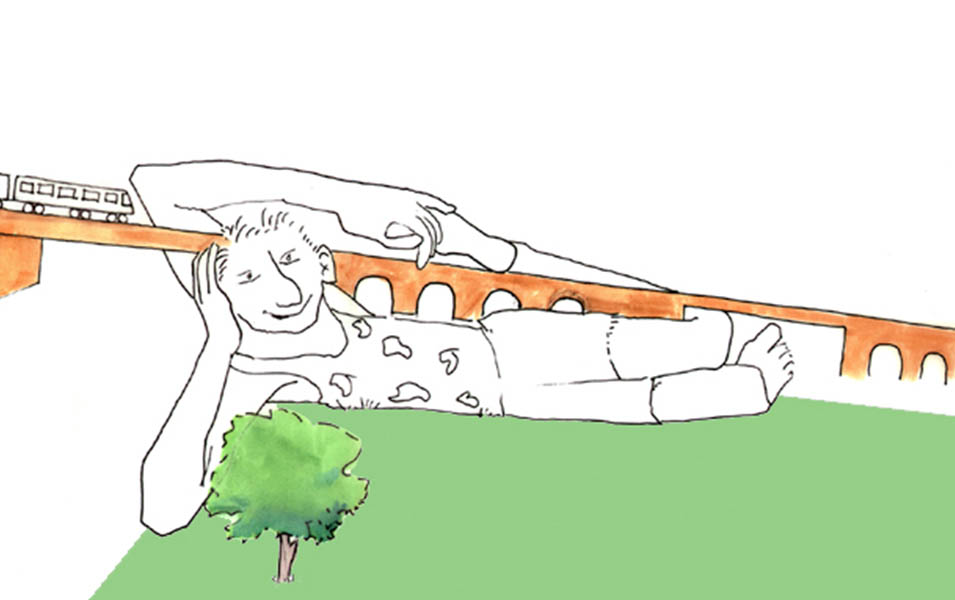 Initial concept sketch: the Hothouse as a friendly giant, looking out over the park while inextricably bound up with the railway viaduct. 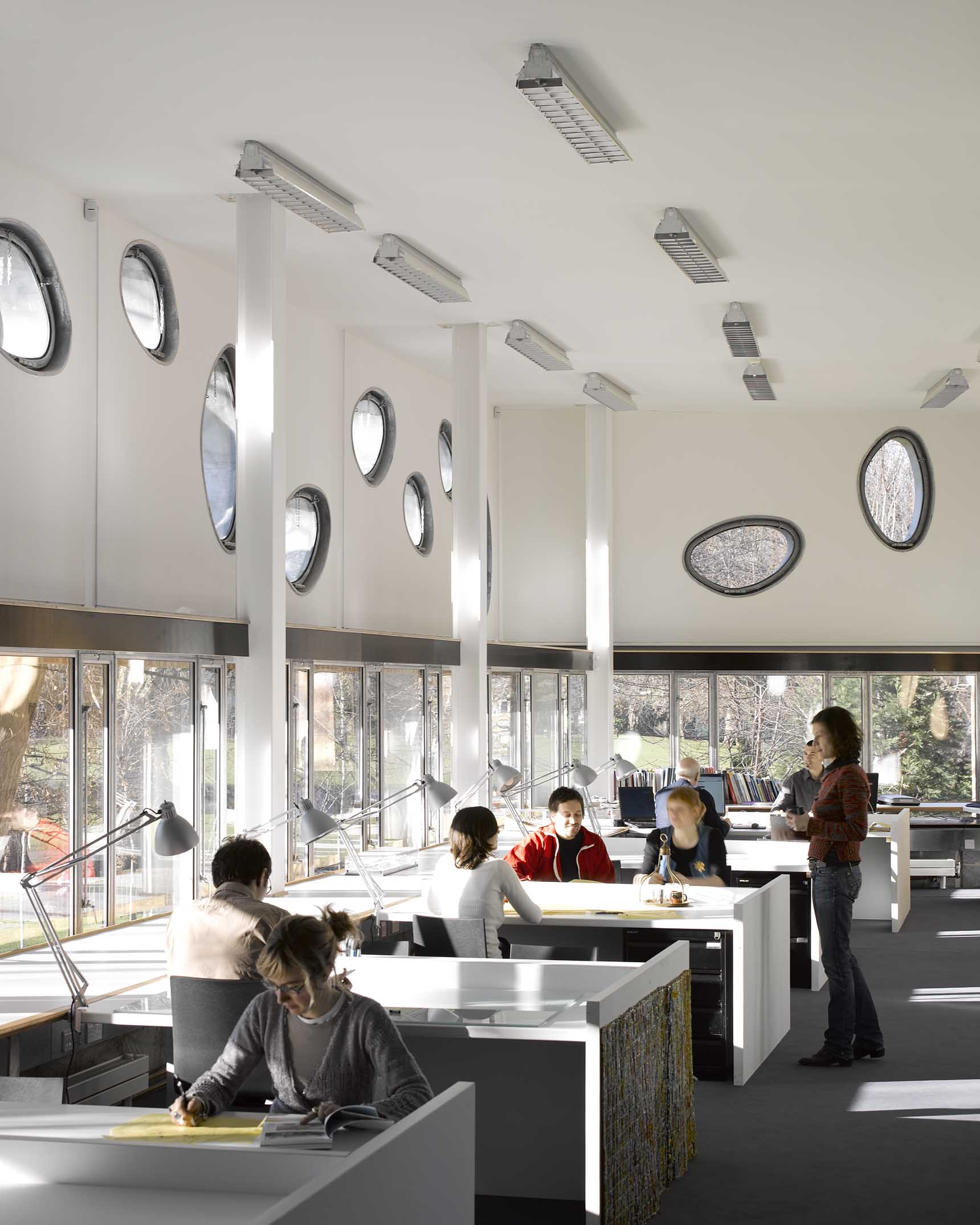 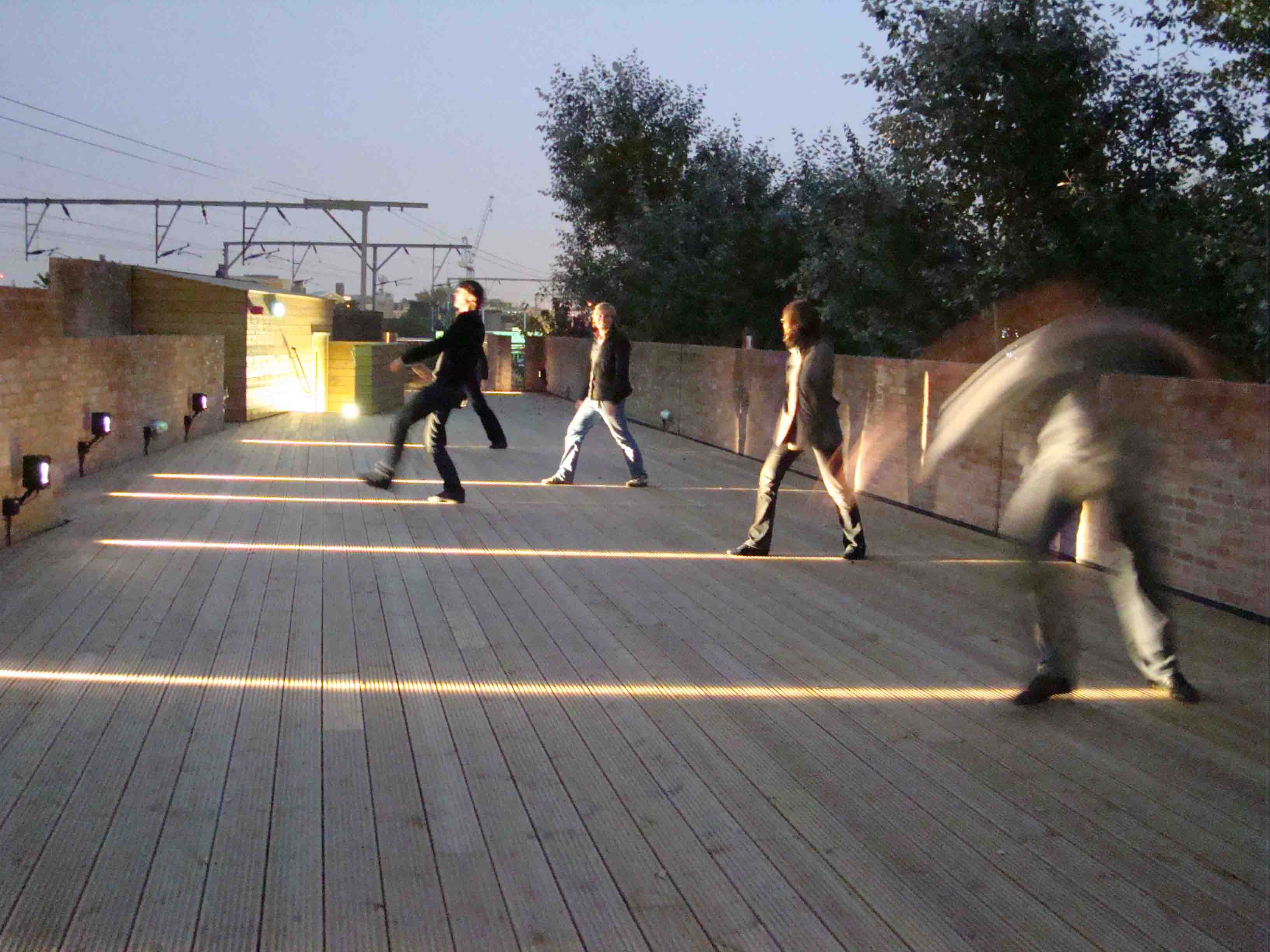 Performance piece on the roof. 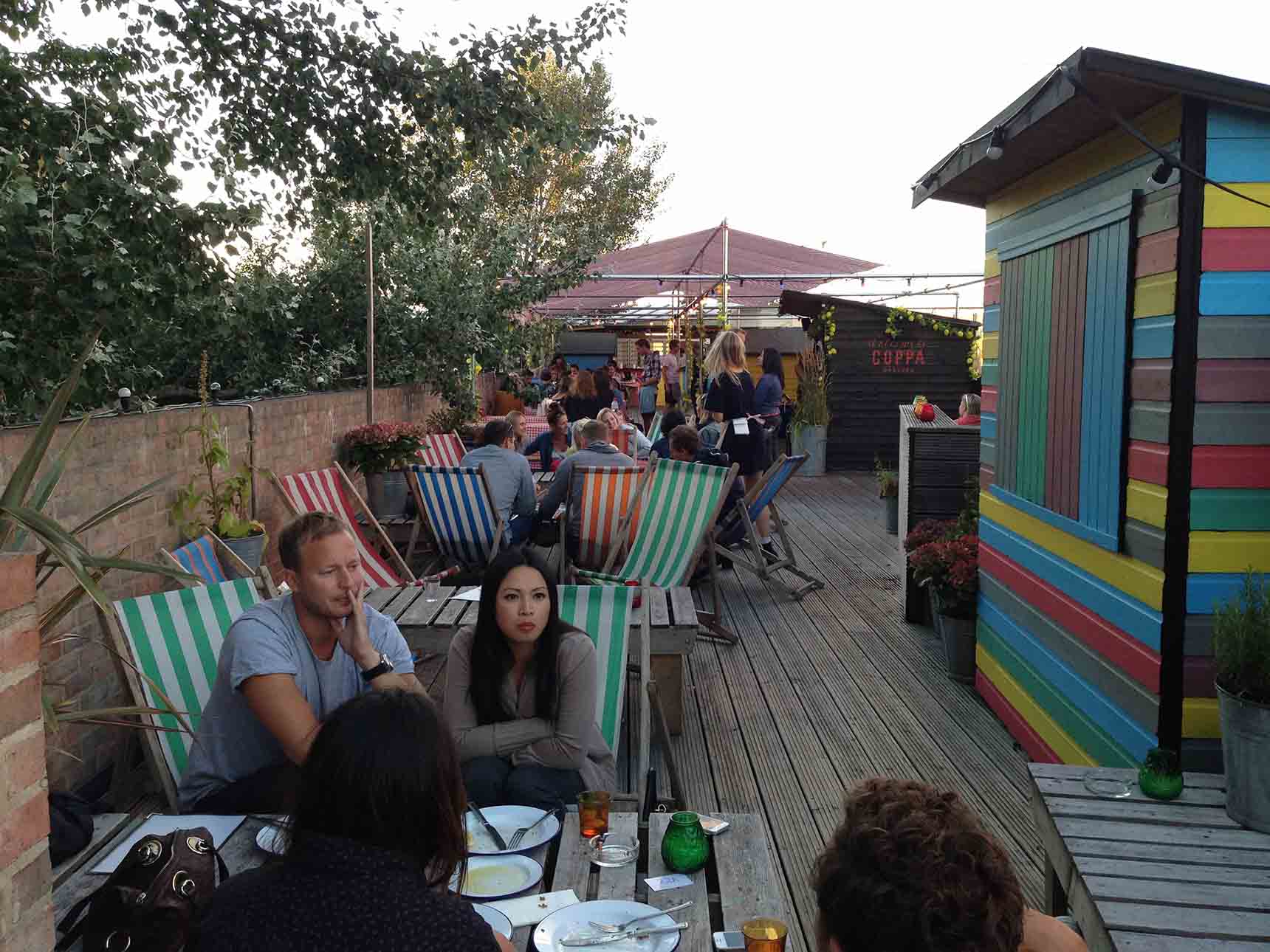 Pop up summer restaurant on the roof.