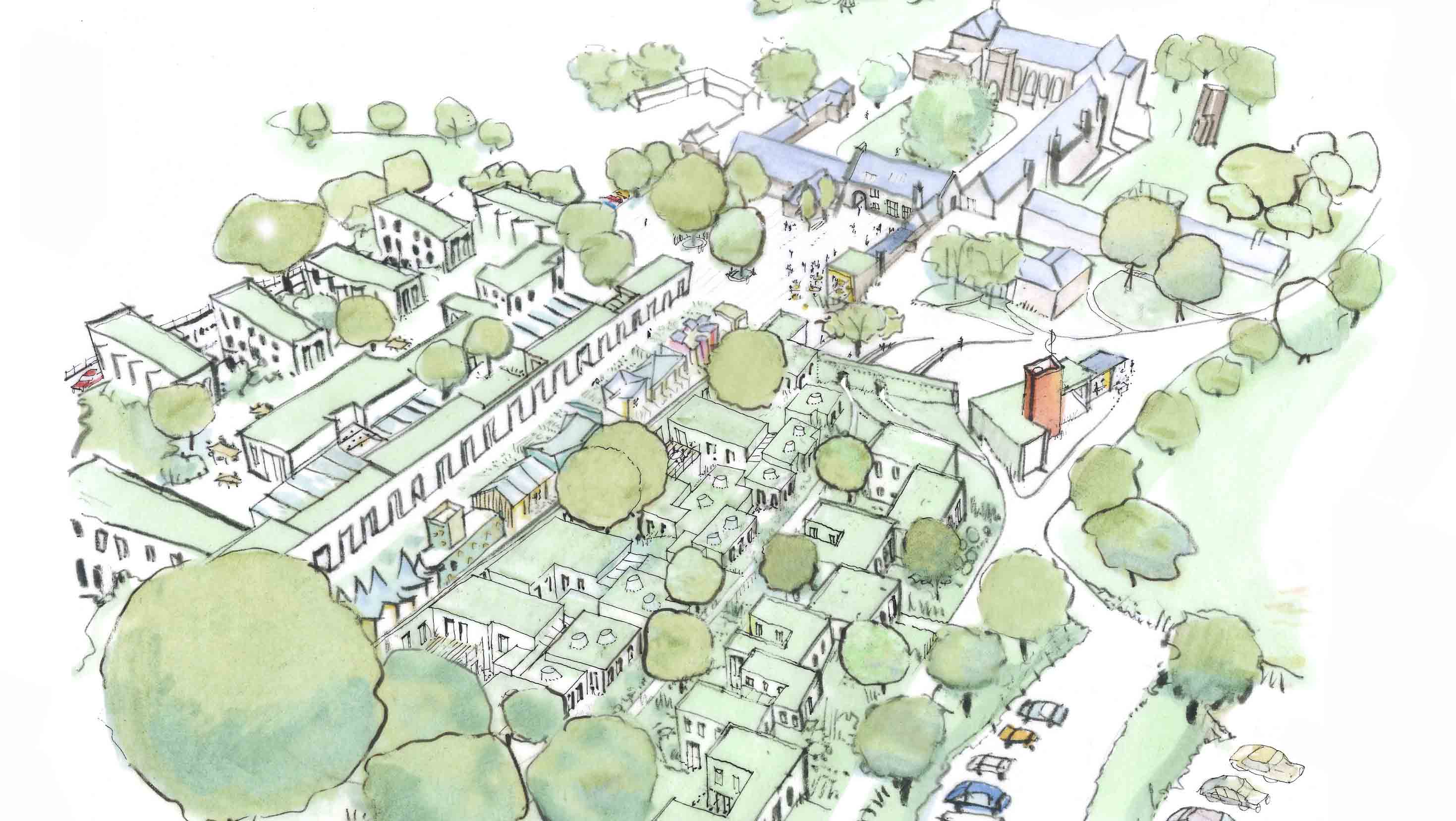 Dartington Hall is a 12th century grade 1 listed hilltop manor house in Devon. It lies in the centre of the Dartington Estate bounded by a loop of the River Dart. Since the 1920s it has been the centre of a series of radical experiments in agriculture, rural industries, forestry, social justice, education, art, music and architecture.

The Elmhirsts, Dorothy a wealthy heiress from Chicago, and Leonard, an Englishman inspired by Rabindranath Tagore in Bengal, were what would be called now social entrepreneurs and cultural innovators. They purchased the estate in 1925 and restored Dartington Hall.

They also founded schools and an art college, built workers’ housing, brought battery hens and artificial insemination to British agriculture, created one of the 20th century's most beautiful gardens, provided a haven for refugees from Nazi Europe, founded an international music festival and built a number of seminal, Bauhaus-inspired buildings around the estate.

Over time, particularly after the death of the Elmhirsts, things changed. The schools closed. Schumacher College, running courses on sustainability, opened. The art college moved to Falmouth. Dartington needed to reinvent itself, and Ash Sakula were commissioned to produce a masterplanning framework for the future of the central Dartington campus. Dartington’s intention was to open an Arts Park, alternatively called an Ideas Laboratory, a rural counterpart to the science parks located on college and university campuses elsewhere.

Our carefully phased masterplan made a number of decisive moves. A new enfilade stretched across the hillside from Dartington’s main archway entrance, occupying the site of a car park. It comprised two massive rammed earth walls behind which sheltered new and existing buildings housing co-working studios. Between the walls were gardens and a row of meeting pavilions which we called sitooteries, to be constructed incrementally as the fruits of an annual open architectural competition.

Between the new campus and the old courtyard we located a Welcome Centre, first point-of-call for visitors, with a new square running down the hillside below it. New car parks were situated up the hill, and traffic diverted to the edge of the campus.

Working closely with Schumacher College, the campus was to be carbon neutral using earth-source heat pumps, and built from materials to be found on the estate, with an aspiration for the campus’s ecological footprint to sit entirely within the estate boundary. 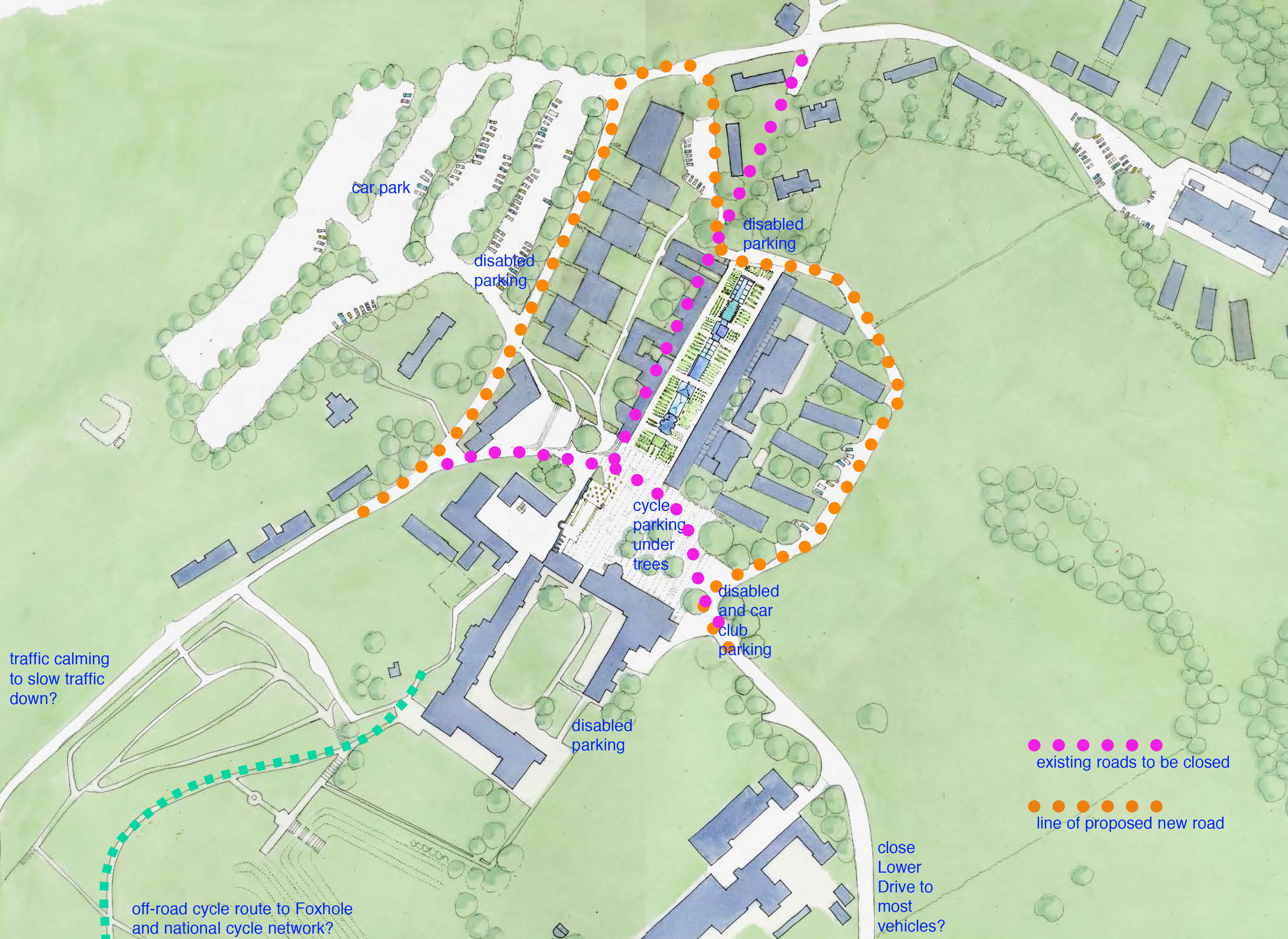 Plan showing the relationship of the proposed new campus extension to the existing Dartington Hall courtyard. It shows how shifting traffic from the centre of the campus allows for a traffic free pedestrian realm throughout. 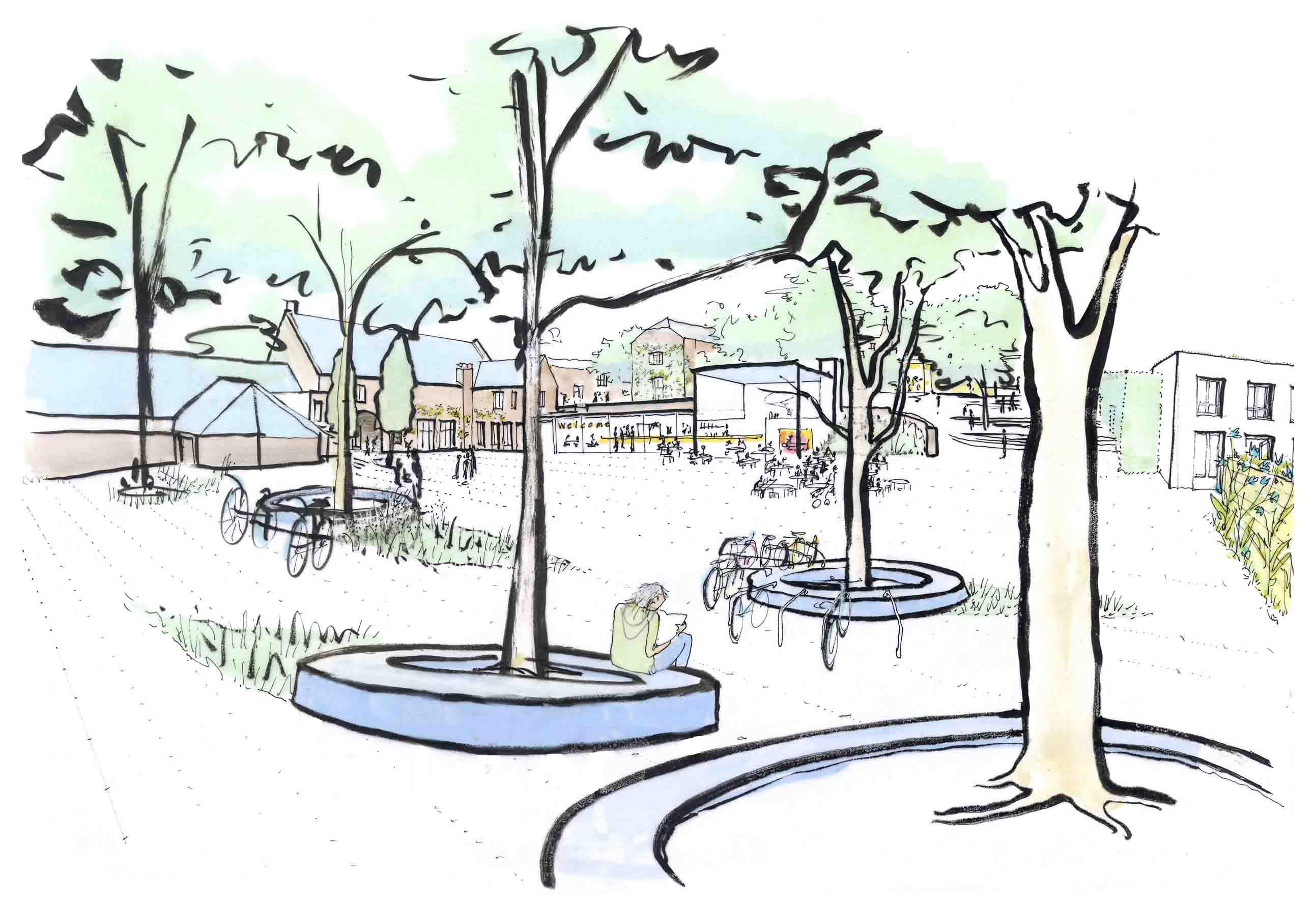 The new pedestrian square running down the hill among existing trees from the new Welcome Centre. 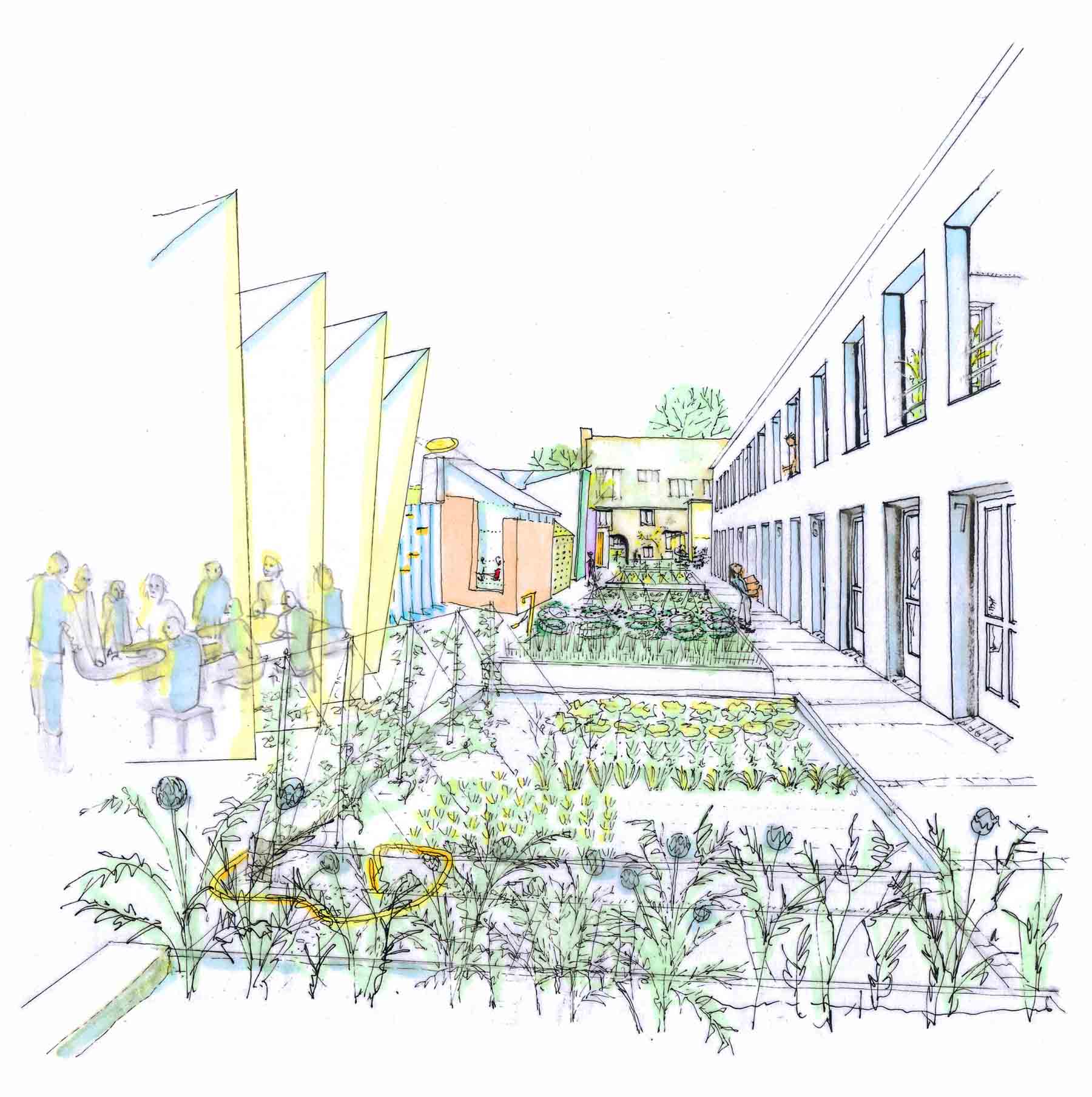 The central enfilade of the new campus, showing one of rammed earth walls, right, the sitooterie meeting pavilions, left, and the productive food-growing landscape between. 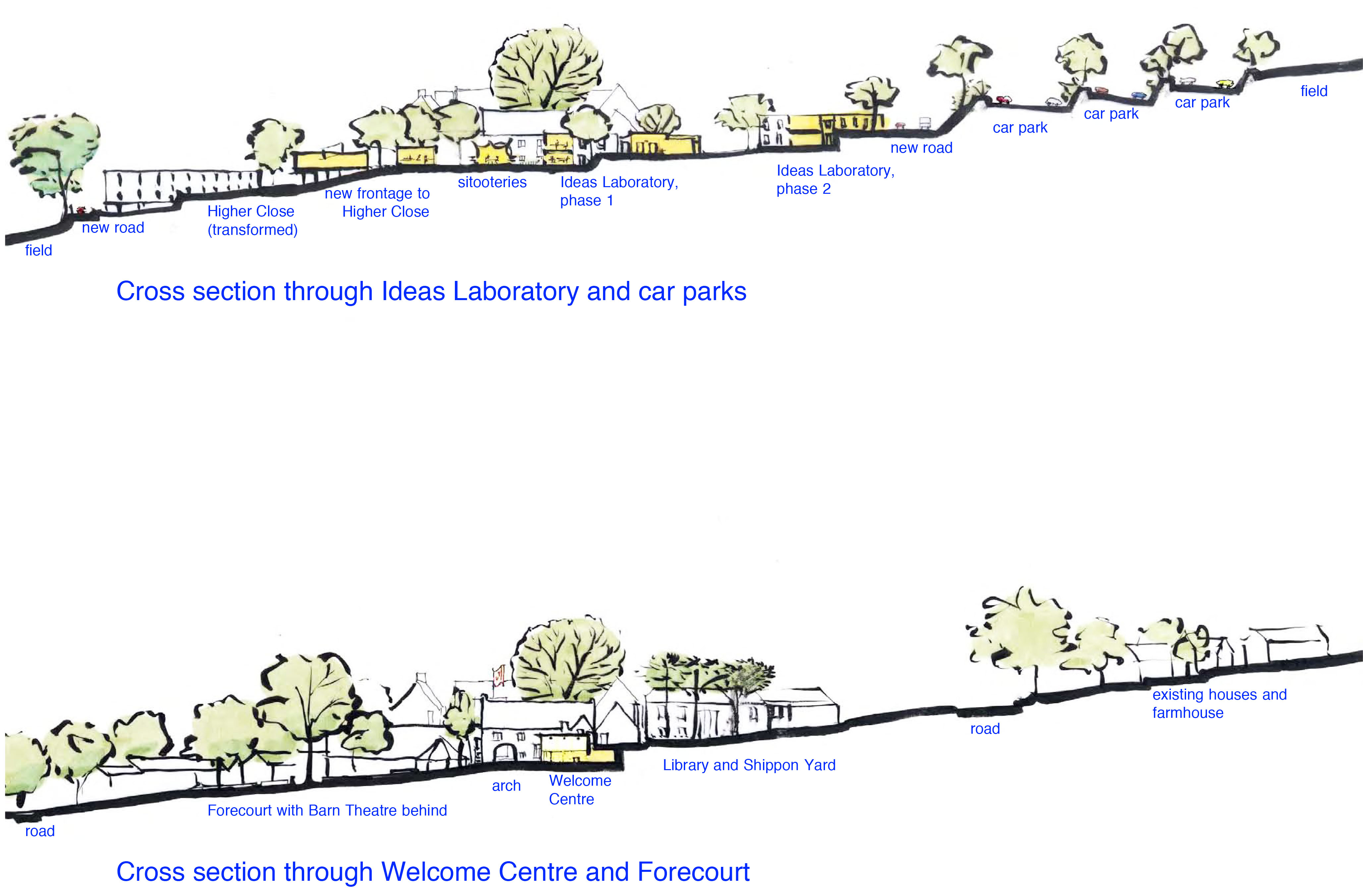 Sections through the new campus spreading across the hillside, incorporating both existing and new buildings

A slice through the proposed Welcome Centre, housing reception and café along a single long counter.

Another slice through the Welcome Centre showing proposed audio-visual story of Dartington and the Elmhirsts in the higher-ceilinged café area. 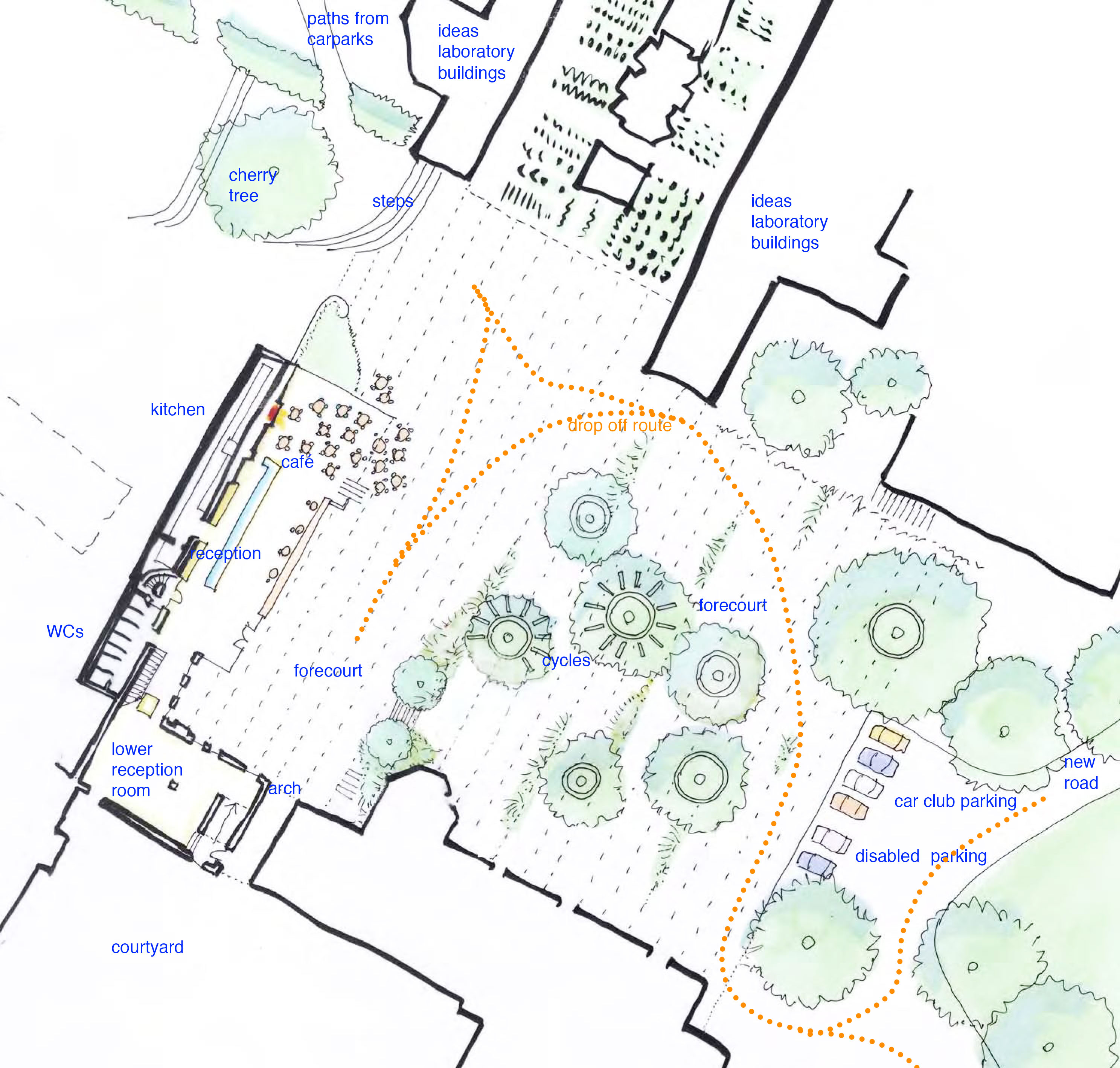 Diverting through traffic around the edge of the new campus enables a pedestrian-friendly new square running down the hillside at the centre of the campus, overlooked by the new Welcome Centre.

Lower level of the central campus, showing the two rammed earth walls, the sitooteries, and the phase 1 co-working studios nestling behind the upper wall. 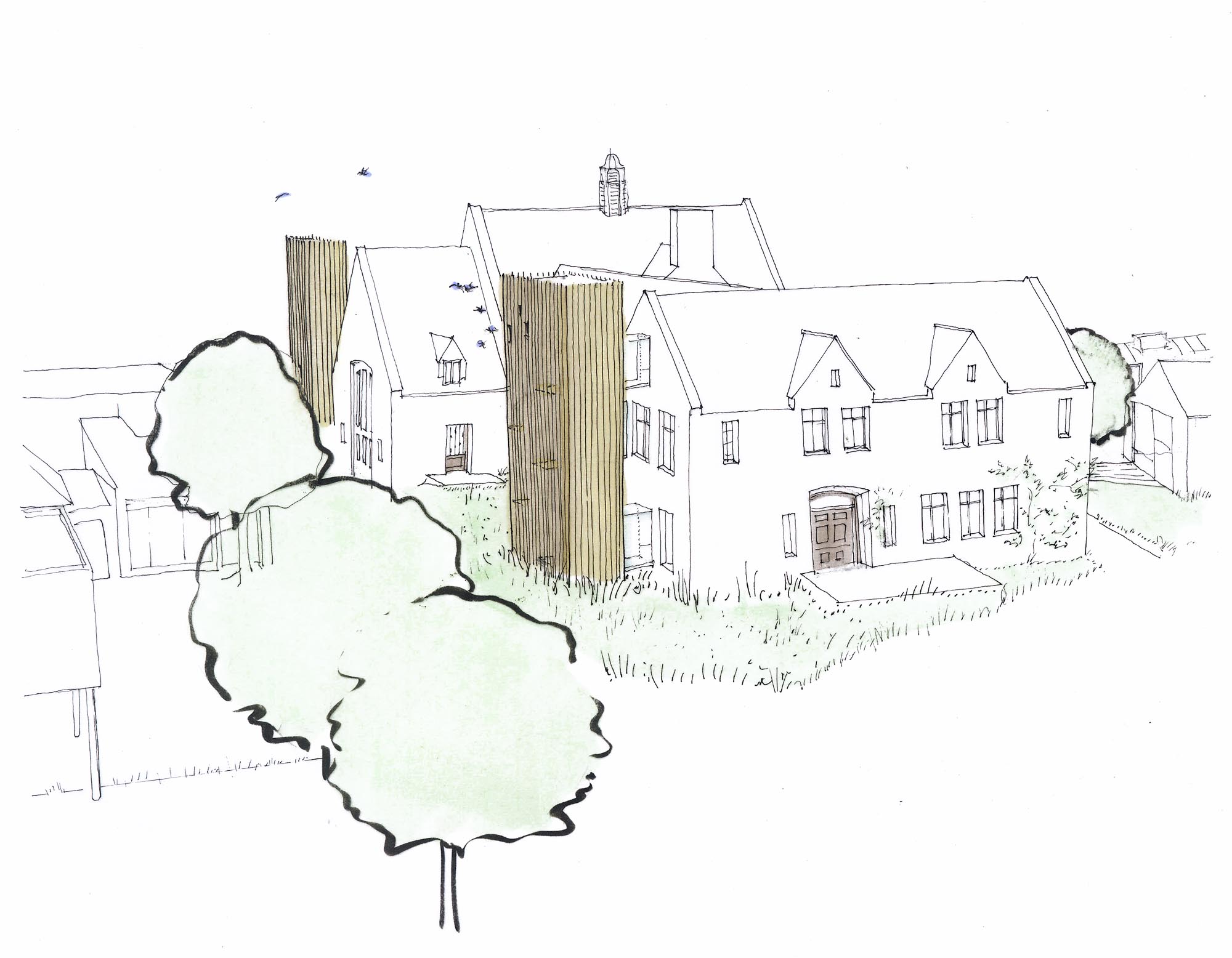 The Aller Park school building as proposed, refurbished to provide studio space downstairs with artists' accommodation above, and showing the new timber-clad stair and lift towers, topped by bat lofts. 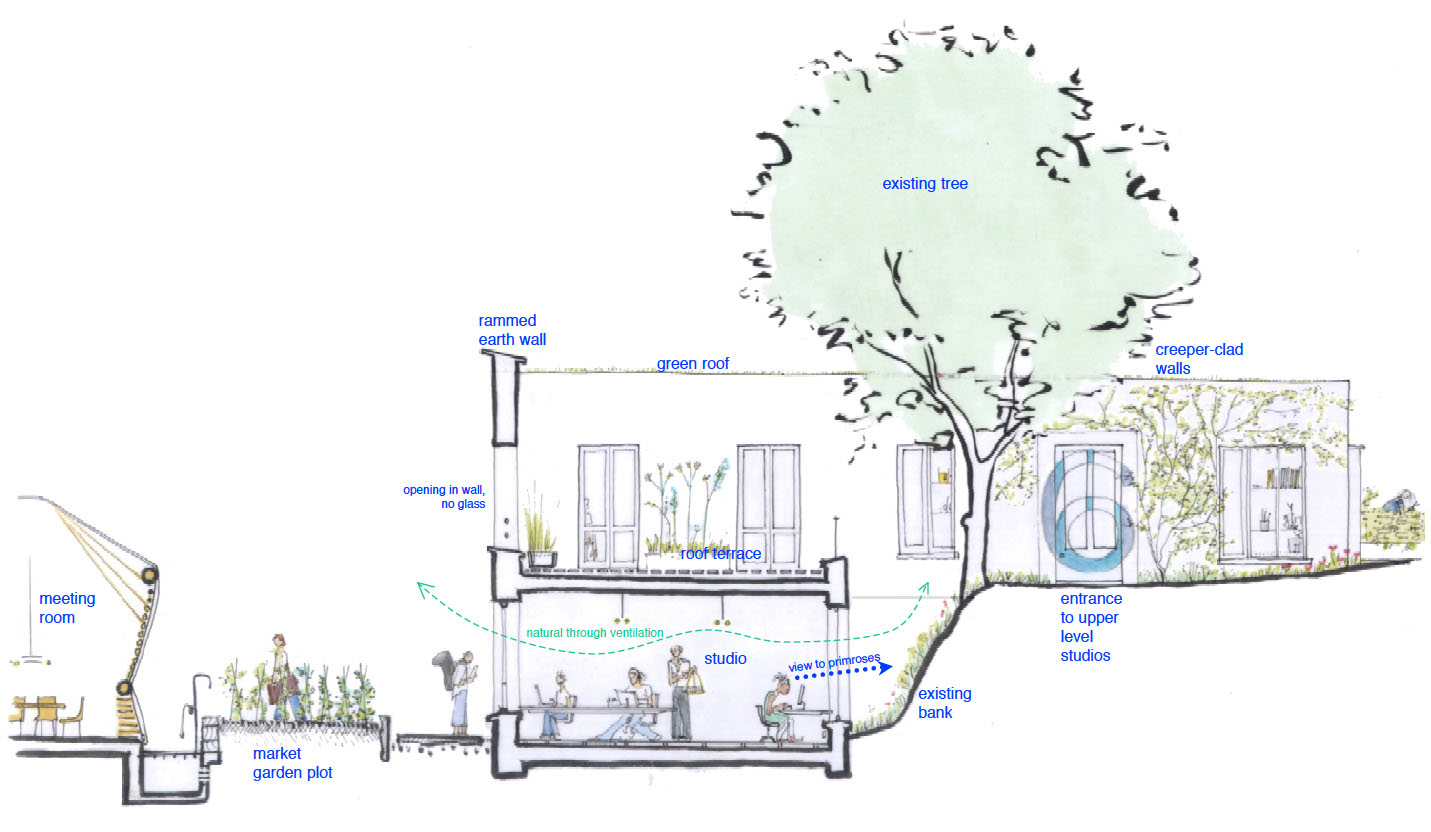 A section through the proposed central enfilade, showing sitooteries, left, and co-working studios behind the upper rammed earth wall, right, with productive gardens between. Access to studios is by means of outdoor ramped pathways across the hillside, with no internal lifts or stairs. 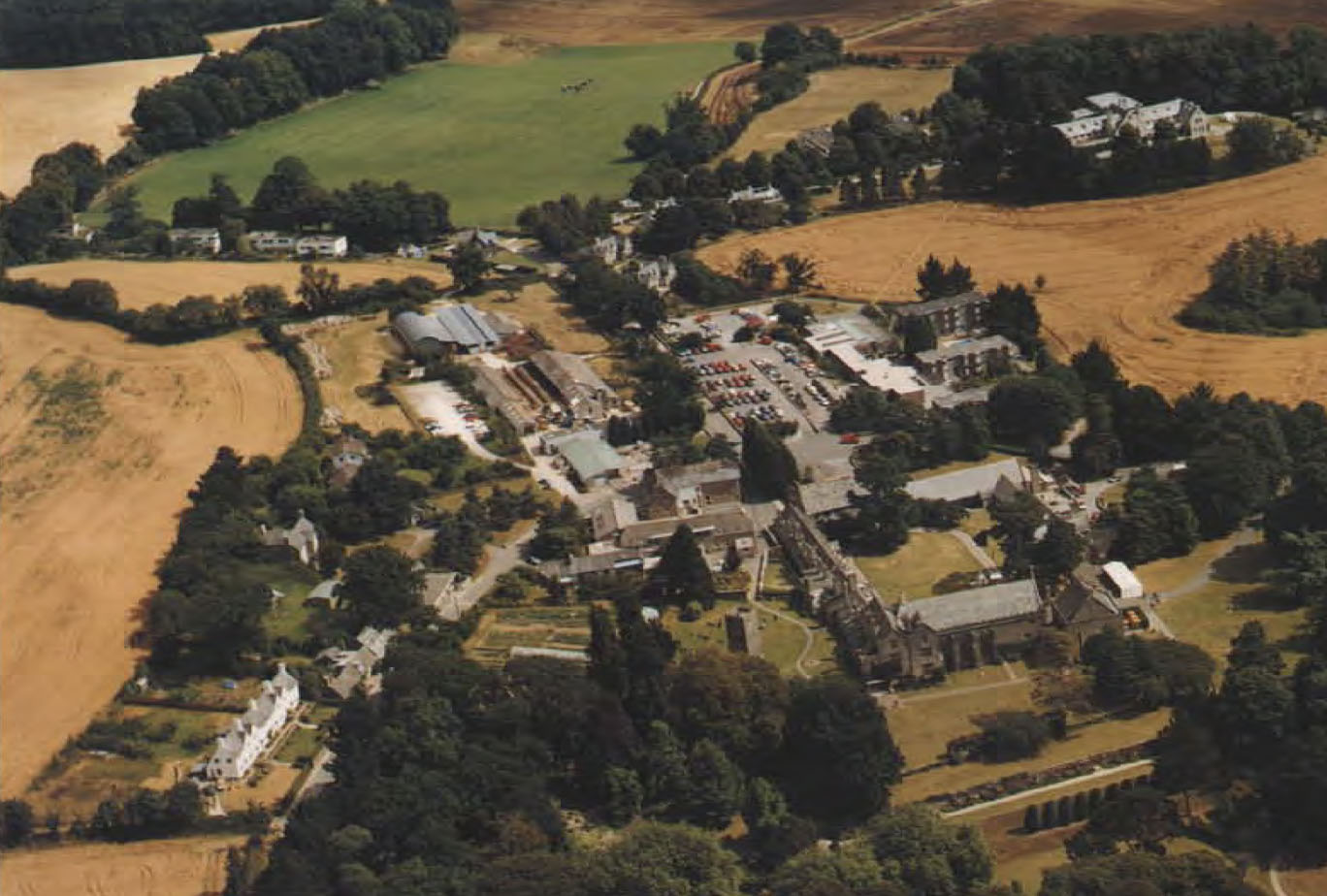 Aerial photograph of the central campus of the Dartington Estate. Dartington Hall around its courtyard is in the right foreground. In the centre of the picture, from left to right are Barton Farm now demolished, the main car park and the Higher Close buildings containing administration and accommodation. Top right are the Aller Park school buildings.