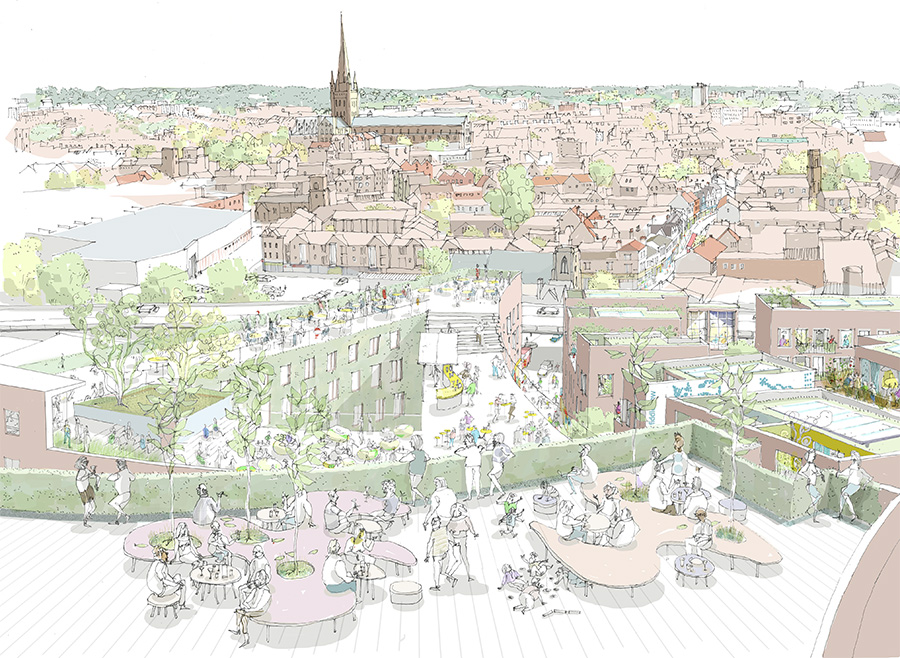 Anglia Square is a 1960s shopping and office precinct in the northern part of Norwich’s city centre. Its retail offer is poor, and many of its buildings are empty.

A current redevelopment proposal for Anglia Square replaces the current precinct with a new precinct. It includes a new shopping centre, 1,250 homes and more than 1,500 car parking spaces in blocks of 6 to 12 storeys. At its centre is a 20 storey tower.

Historic England objects to the proposals in view of their effect both on the immediate neighbourhood of Anglia Square and on the significance of Norwich’s City Centre Conservation Area and that of many of the historic buildings within it.

They commissioned Ash Sakula to develop an alternative approach to Anglia Square, showing how its redevelopment could complement its neighbourhood and the historic cityscape of Norwich. 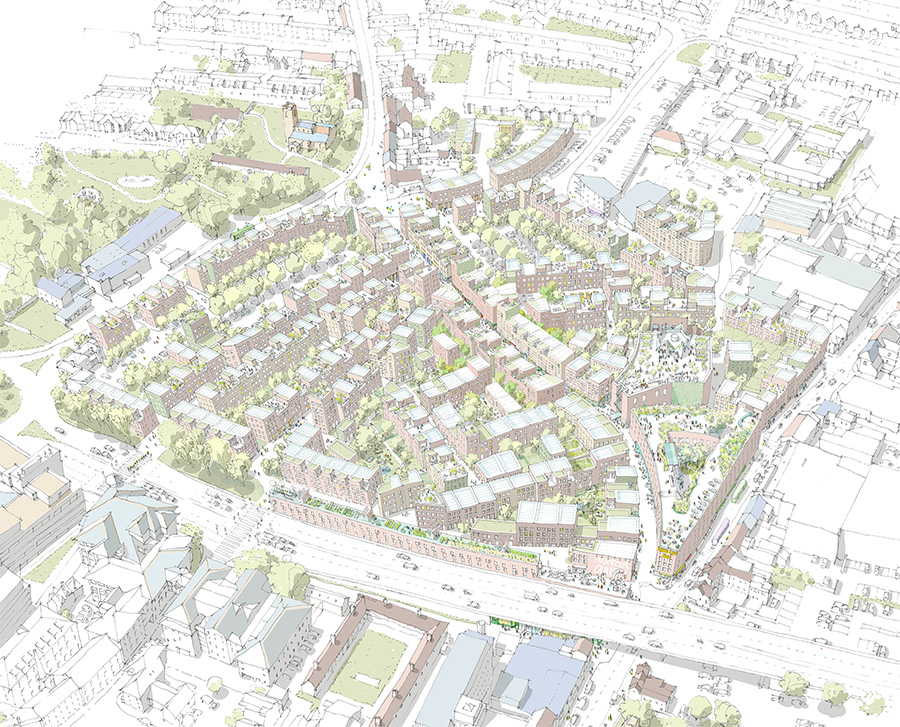 An aerial view of our proposal

Our approach explores a number of key themes:

A hierarchy of routes from large to small.

Different ways of getting from A to B.

Traditional street layouts are a near infallible guide for where people want to go.

Traffic needs adapt to the street pattern, not the other way round.

Streets are places, not corridors

Trees in clumps not avenues.

Significant buildings and corners are given prominence.

Pedestrian priority throughout, with cycle and car movements tamed.

Streets come in all shapes and sizes.

The urban grain is intricate, syncopated and surprising.

Learning from other places

London: slowly discovering that two way streets are nicer than one way.

One building can house different uses – either simultaneously or over time.

Avoiding corridors, lifts and common parts, bringing people out onto the street and reducing cost.

Some parts of the new Anglia Square should be busy and buzzy: bustling crowds, bright lights, laughter.

Other spaces should be calm, quieter, places of relaxation and repose.

A playful public realm for children of all ages from 8 months to 80.

A bit of the city

Anglia Square should not be a separated precinct, but a seamless part of the city of Norwich.

Exceptions to this should be for ‘special’ buildings and uses. 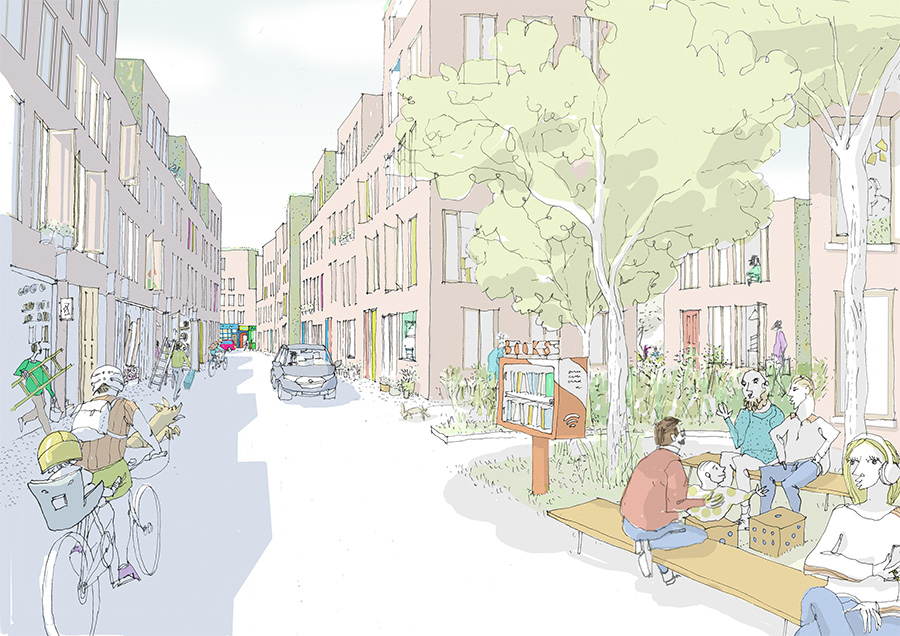 We presented our initial ideas and invited all-comers to share their vision of what Anglia Square could become. Their inputs have helped form this vision for its future. 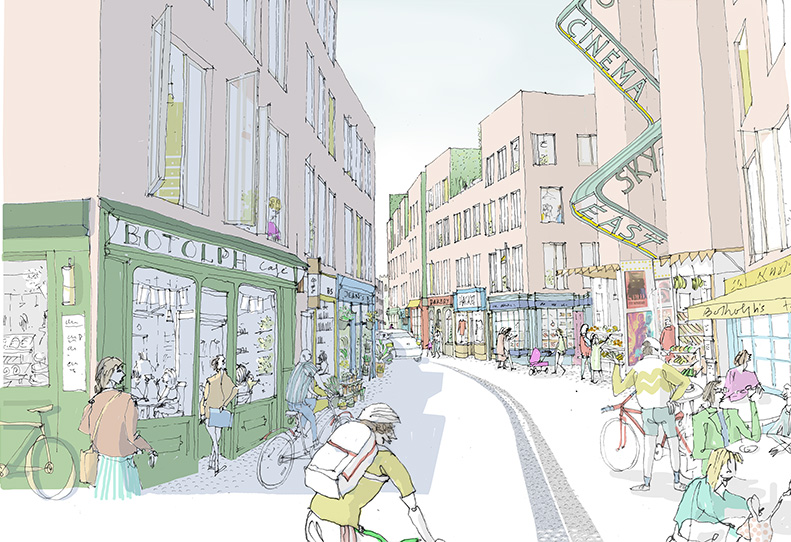 The starting point for our alternative masterplanning approach is the 1885 map of the area, displaying a medieval street pattern which remained essentially unchanged for centuries until the construction of Anglia Square and the city ring road in the 1960s.

What is clear is that the desire lines represented by the ancient alignments of Botolph Street, Middle Street, Calvert Street and the unnamed lane along the south eastern edge of the manufactory remain as valid today as when they first emerged, and they have formed the basis for our proposed layout, as shown in the plans and images here.

Anglia Square as it exists is the result of 1960s urban renewal. In line with the precepts of the time it is a precinct, separated from and to some extent isolated from its surroundings. We do not think that an appropriate planning response to the redevelopment of Anglia Square is another precinct. Rather than separating the new development from its neighbourhood, we have aimed to connect it, by means of streets which link with its surroundings, building forms that are in scale with its neighbours and, where possible, to reconnect the severances caused by the major roads around the the site, particularly on its south and west sides.

Anglia Square is close to the centre of Norwich and well-served by buses. We are proposing to limit the amount of car parking provided. This will encourage walking, cycling and public transport, helping Norwich become less car-dependent, as befits a twenty first century city. There are four surface car parks. In time, with less car-dependency, they can be developed for housing.

Anglia Square’s network of streets is permeable to cars, servicing and delivery vehicles, and emergency services. You can have things dropped off at or close to your house, but you cannot park there. All streets are shared surface, with pedestrian priority, creating a safe, attractive, playable public realm.

Botolph Street and Magdalen Street are lined with shops, cafés and restaurants with homes above. Retail units are a range of sizes, but are predominantly small, to encourage independent traders. There are three large units, one under the cinema multiplex, one on the corner of Magdalen Street and Edward Street, the third infilling the waste ground under the flyover.

On Middle Street, Calvert Street, New Street and Elephant Row are studios and workshops. Those on Elephant Row act as a buffer to the ring road flyover. Intended for artists, they have large windows facing north and a communal roof terrace.

Homes are a range of typologies. All are dual aspect, and every home has either a small garden or a large roof terrace. There are occasional five storey tower houses but the predominant urban form is made up of three storey townhouses and four storey stacked duplexes, creating streetscapes in scale with Norwich’s traditional architecture.

Every home also has its own front door onto the street. There are no common parts, lifts, shared staircases, balconies or corridors. This means that net to gross is 100%, so both the construction cost and residents’ service charges are lower. It also promotes health and wellbeing: visible activity on the street rather than hidden activity in lifts and corridors encourages chance encounters with neighbours, conviviality and the growth of an authentic community.

Anglia Square becomes an integral piece of the city of Norwich, a neighbourhood with homes, workplaces, a chapel, a cinema, supermarket, hotel and a range of independent shops, cafés and restaurants, including a rooftop sky garden with views across the city.

The approach we have developed provides the following accommodation: 595 homes; 46 shops, cafés and restaurants; a 100 room hotel; an 8 screen cinema; 48 studio workshops; a chapel; and 266 car parking spaces. 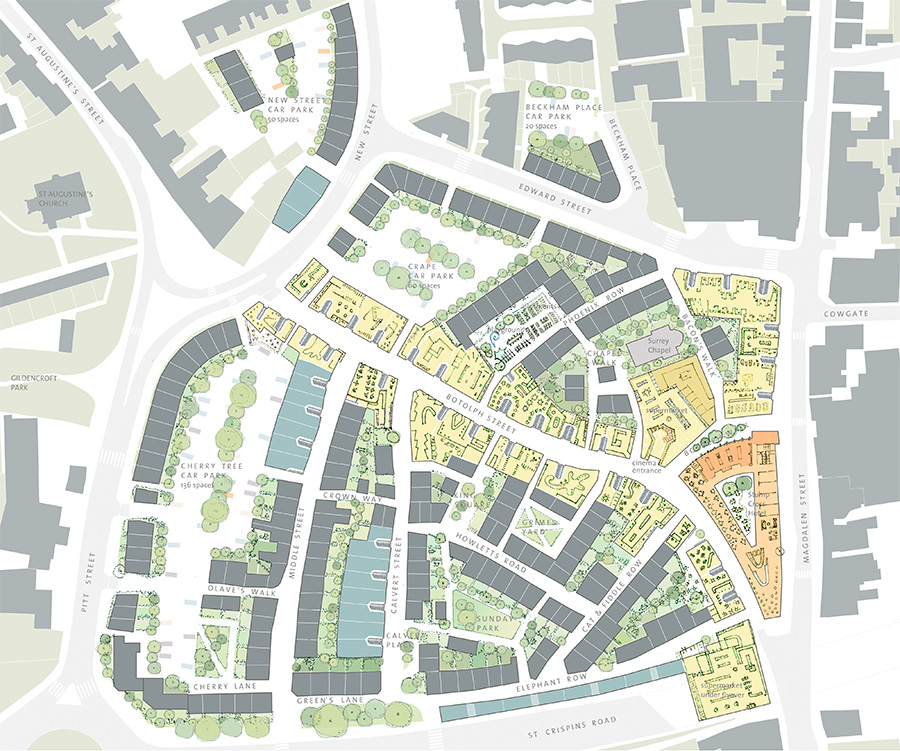 Ground floor plan. Botolph Street follows its ancient alignment and is lined by shops, restaurants and cafés, as well as a multi-screen cinema and a hotel. 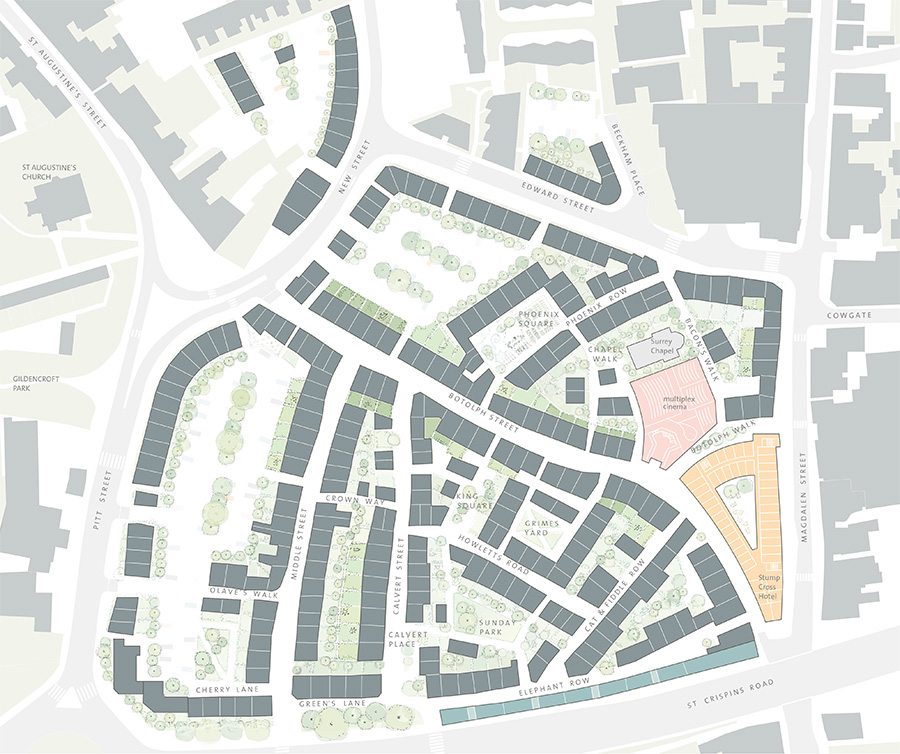 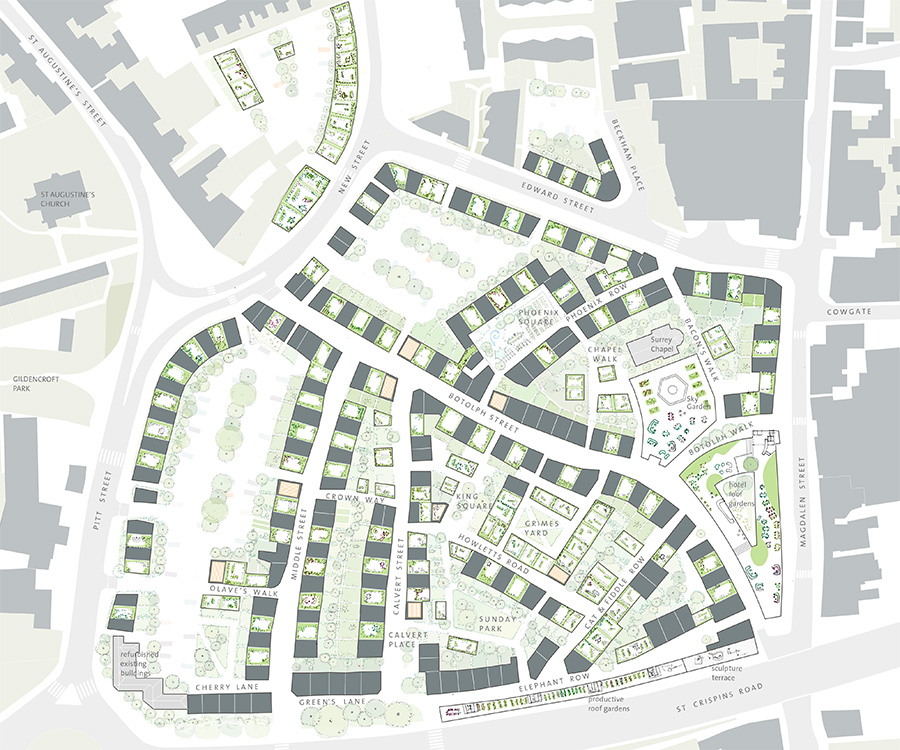 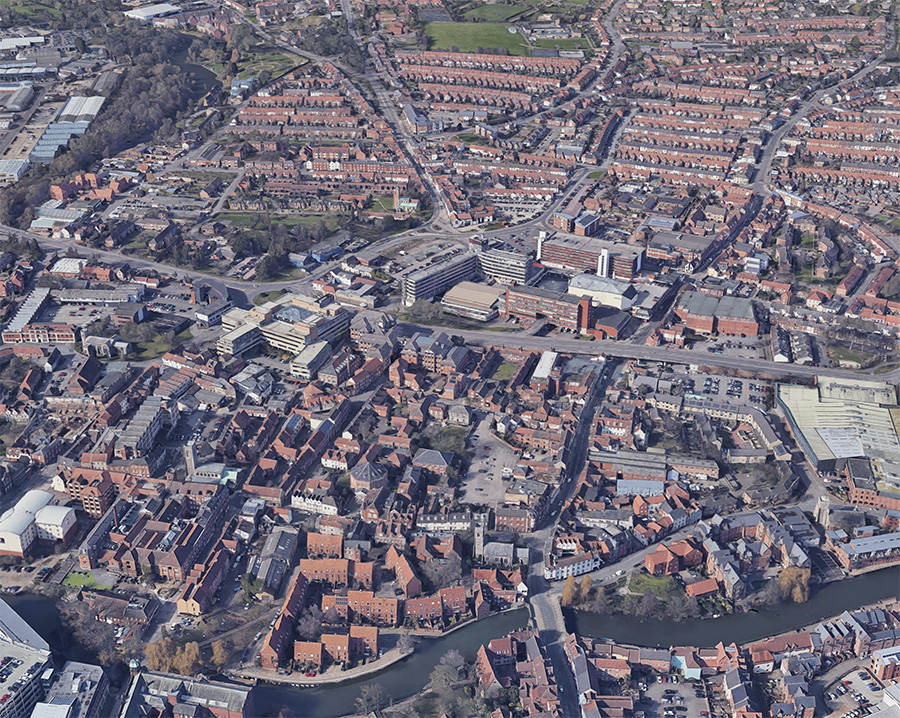 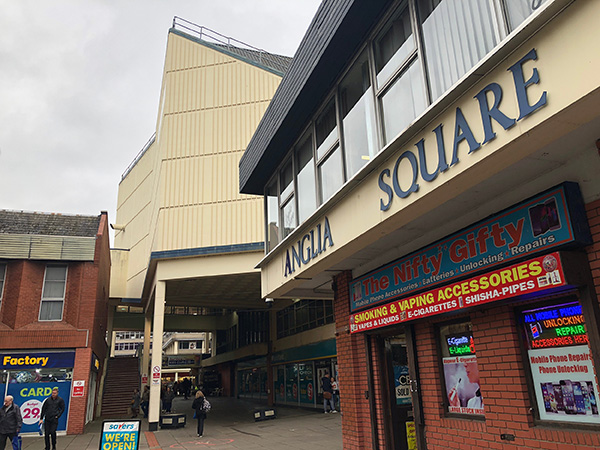 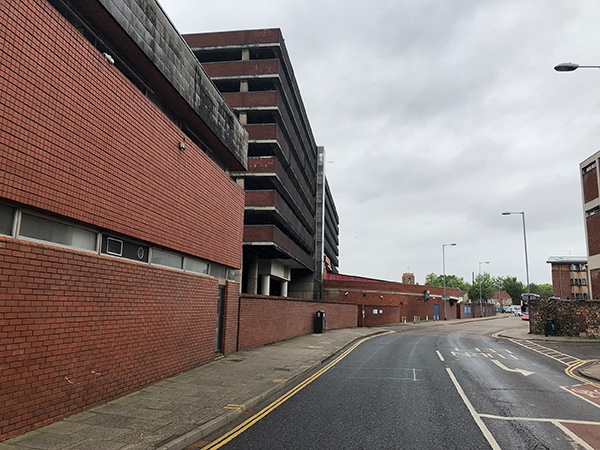 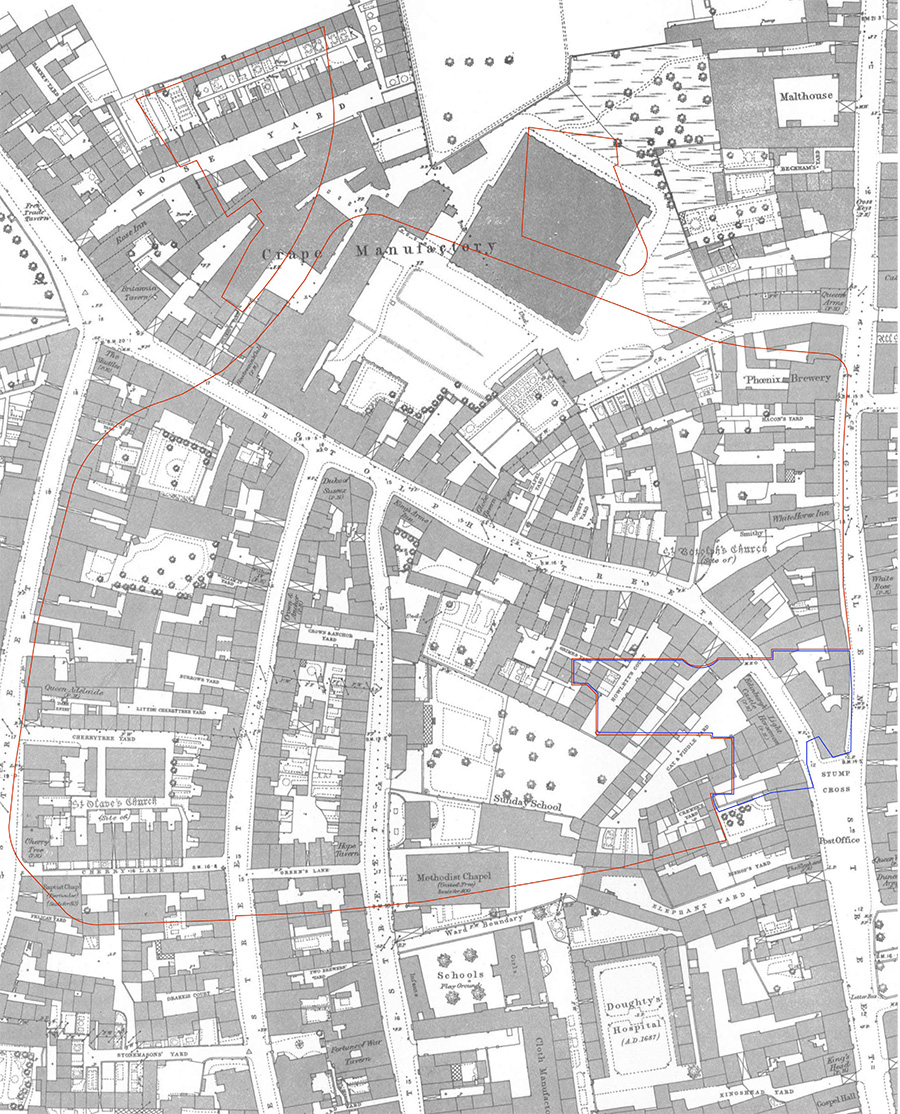 The 1885 map shows a city layout virtually unchanged since medieval times. The boundary of Anglia Square is outlined in red and blue. 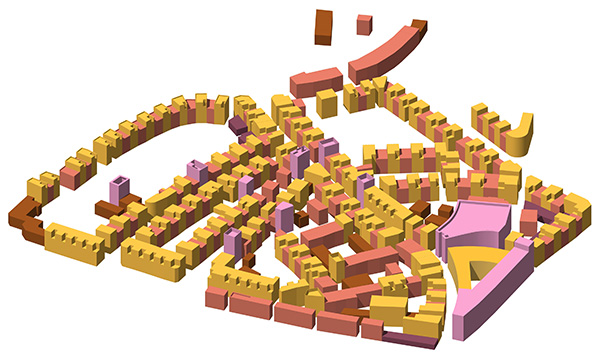 Layout diagram showing heights of proposed buildings, ranging from one to five storeys. 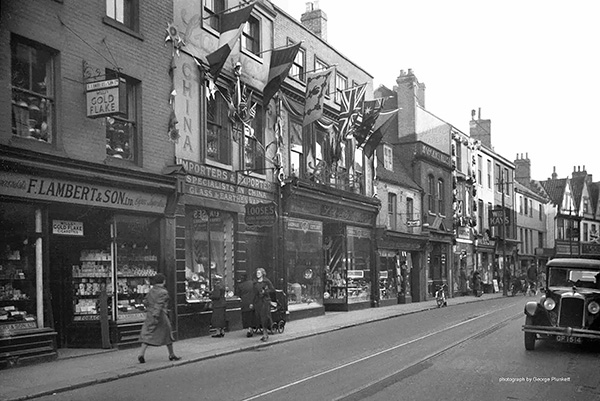 Inspiration from Magdalen Street as it once was.