In 2018 a comprehensive redevelopment of Anglia Square was proposed, featuring eight to twelve storey buildings with a twenty storey tower at its centre.

Historic England (HE) objected to the proposals, along with SAVE Britain’s Heritage, the Norwich Society and many others in view of their effect both on the immediate neighbourhood of Anglia Square and on the significance of Norwich’s City Centre Conservation Area and that of many of the historic buildings within it. HE commissioned Ash Sakula to develop an alternative approach, showing how Anglia Square’s redevelopment could complement its neighbourhood and the historic cityscape of Norwich.

Subsequently the proposal was rejected by the Secretary of State.

The developer has now submitted a new proposal - this time without the former 20 storey tower. However, the proposal remains out of scale.  A total of 14 blocks are proposed, most as high as eight storeys, set against which the city centre conservation area is predominantly characterised by two, three and four-storey buildings, particularly around St Augustine’s Church and the residential streets to the north, east and west of the site. The proposal remains car centric and disconnected from its wider neighbourhood. Its design is generic, avoiding reference or connection to the city around.

SAVE Britain’s Heritage has commissioned Ash Sakula to develop their earlier proposals into this alternative masterplan, which aims to champion an urbanism embedded in Norwich.

The starting point for our alternative masterplanning approach is the 1885 map of the area, displaying a medieval street pattern which remained essentially unchanged for centuries until the construction of Anglia Square and the city ring road in the 1960s.

What is clear is that the desire lines represented by the ancient alignments of Botolph Street, Middle Street, Calvert Street and the unnamed lane along the south eastern edge of the manufactory remain as valid today as when they first emerged, and they have formed the basis for our proposed layout, as shown in the plans and images over the next few pages.

Anglia Square as it exists is the result of 1960s urban renewal. In line with the precepts of the time it is a precinct, separated from and to some extent isolated from its surroundings. Rather than separating the new development from its neighbourhood, we have aimed to connect it, by means of streets which link with its surroundings, building forms that are in scale with its neighbours and, where possible, to reconnect the severances caused by the major roads around the site, particularly on its south and west sides.

The 773 homes offer a range of typologies. All are dual aspect, and every home has either a small garden or an elevated terrace or balcony.  There is a small number of six storey apartment buildings as well as five storey houses, but the predominant urban form is made up of three and four storey stacked apartments and duplexes, creating streetscapes in scale with Norwich’s traditional architecture.

Most homes have  their own front door onto the street, avoiding common parts, lifts, shared staircases, balconies or corridors. This means that net to gross is 100%, so both the construction cost and residents’ service charges are lower. It also promotes health and wellbeing: visible activity on the street rather than hidden activity in lifts and corridors encourages chance encounters with neighbours, conviviality and the growth of an authentic community.

Anglia Square is close to the centre of Norwich and well-served by buses. We are proposing to limit the amount of car parking provided. This will encourage walking, cycling and public transport, helping Norwich become less car-dependent, as befits a twenty first century city. There are 108 car parking spaces.

Anglia Square’s network of streets is permeable to cars, servicing and delivery vehicles, and emergency services. You can have things dropped off at or close to your house. All streets are shared surface, with pedestrian priority, creating a safe, attractive, playable public realm.

Botolph Street and Magdalen Street are lined with shops, cafés and restaurants with homes above. Retail units are a range of sizes, and are predominantly small, to encourage independent traders. There are three large units, suitable for supermarkets, pharmacies or homestores.

On Middle Street, Calvert Street, New Street and Elephant Row are studios and workshops. Those on Elephant Row act as a buffer to the ring road flyover. Intended for artists and makers, they have large windows facing north and a communal roof terrace.

Anglia Square becomes an integral piece of the city of Norwich, a walkable neighbourhood with homes, workplaces, a community hall, supermarkets, and a range of independent shops, cafés and restaurants. Some existing buildings are retained. The Surrey Chapel and the Men’s Shed in the south west corner are unaffected.

The approach we have developed is informed by both City Council policy and community voices. 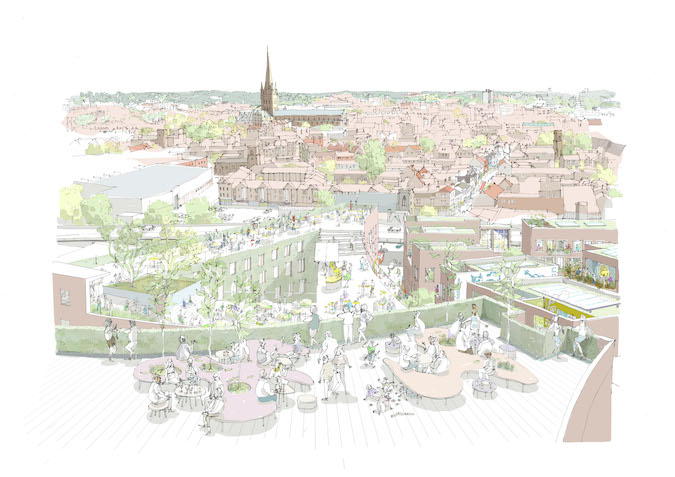 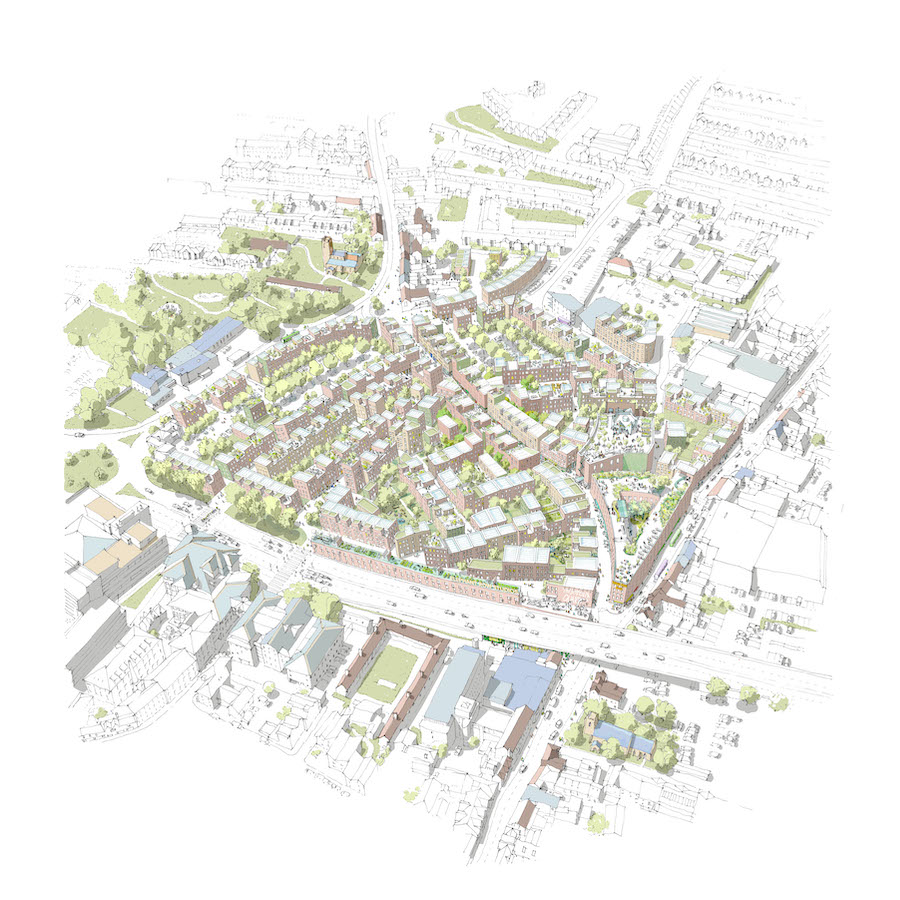